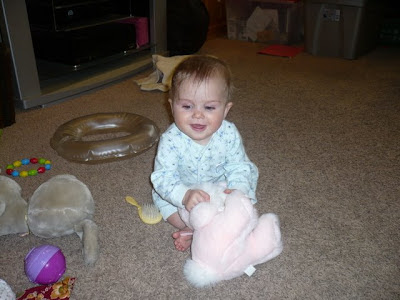 Rachel in her pyjamas
Part of our morning ritual is to see Daddy off to work. We give him hugs and kisses and wave bye-bye at the door and then we run to the window and knock on it while he gets in his car.

Rachel is pretty consistent with her kisses. She always is sure to give Daddy a big, slobbery one before he leaves. And usually she's okay with waving bye-bye, wildly flapping her arm...but only after Daddy closes the door. Her favorite part is definitely looking out the window. She licks the glass and bangs her forehead and fists on it and smiles at Daddy (and anyone else who happens to be watching the show).

This morning started out unlike any other. Rachel played with Daddy for a few minutes until it was time to go. After family prayer Rachel got to snuggle with Daddy and then he passed her off to me so that he could put on his backpack. We went to the door as usual and Daddy stood outside waving at Rachel while she and I stayed inside waving back.

"Say bye-bye," we prompted her.

Much to our surprise, Rachel put out her hand, gave a little wave, and said, "Bab bab!"

We waved and said bye-bye for quite a bit longer than usual, we were so caught up with Rachel actually waving before the door was closed and that she was saying something that sounded similar to bye-bye.

Eventually Andrew really did have to leave, so we went to the window to wave and she kept saying bye-bye to Daddy while waving her little heart out. Quite an exciting start to the day. 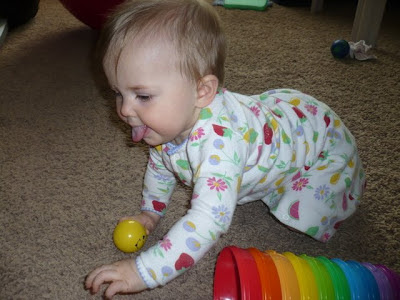 I'm not sure that I'm convinced that she knows what she's saying yet. She's been mimicking quite a lot lately. Yesterday we were making a crossword puzzle with her blocks. First we spelled 'Rachel' and then we spelled 'Daddy' using the 'A' in 'Rachel.' Next we tried to spell 'Mommy' but were having a hard time finding enough ems.

"EM!" She said again (that should make Auntie Em happy--Jacob, keep working on making her say "Juh." Good luck.) after digging through the pile of blocks. 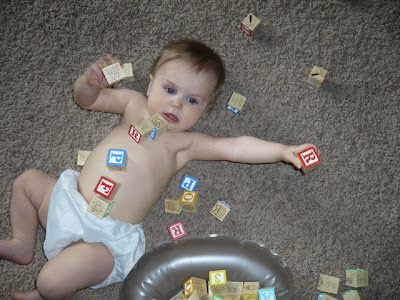 Playing with the blocks
So, Rachel's repertoire of words now includes mama, dada, bye-bye, em and the occasional amen. Although all these syllables are more often than not also involved in nonsensical babbling, there are times when she says them and means them. Except for em. I don't think she knows that M is a letter of the alphabet. I think she thinks it means something along the lines of, "Is this the block you were looking for, mom?"

Rachel is also starting to take notice of facial features. She loves to point out noses, mouths, and eyes in the mirror (it's a great way to pass the time while she's sitting on the potty). This morning she was lying in bed holding onto both of her ears. Andrew went and picked her up and she held onto her ears until she was sitting up in his arms. Then she reached out and grabbed hold of his ears. 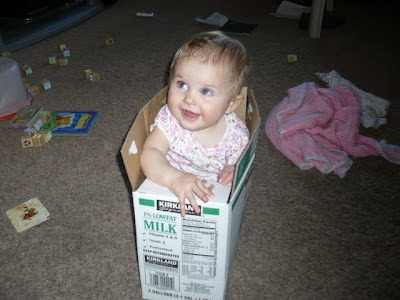 Milk baby!
She also likes to stand. Yesterday when Daddy came home from work she crawled right over to him, pulled herself up and then let go and just stood there with a look on her face that said, "Yes, I know I'm awesome." Then this morning she was crawling over to me to give me a hug but stopped a few paces in front of me and held out her hand. I held out my hand and she pulled herself up, took a few steps forward (while holding my hand), let go and fell into me with her arms wide open and gave me a big bear hug!

The longest she's stood up by herself, that we know of, has been about a minute. She loves to show off to other babies. At church on Sunday Andrew took her out in the hall and there were two little baby boys playing on the floor: Russel and Braiden. Rachel got down to play with them and they all ended up in a triangular dogpile, each using the other to push up into standing position while being pulled down by whoever was trying to use them as an aide.

She still loves to crawl, but also enjoys walking around holding onto our hands. She squeals with delight everytime we take her outside and loves to go to the park.

She likes for me to help her balance things on her head. She'll hold very still for a few seconds and then will tip her head to the side so that whatever it was will fall off.

She loves water. She loves drinking water from cups, sippy cups, bottles, the bathtub, and any other source--I've had to stop her from drinking from puddles. The only thing she hasn't mastered is the straw but she'll figure that out soon enough, I'm sure. She loves the water guns we have, both being sprayed by them and drinking out of them. And she still loves bath time and showers passionately. I hear that the pool in Lehi has lifted the diaper ban. We'll have to try to take her there this summer.

She's getting a lot gentler with books (we're still working on the people thing) and hasn't completely mutilated a magazine in quite some time. Instead she'll flip through and point at the pictures. That's a nice change. She'll often choose a book from her shelf and bring it over to us so that we'll read it for her. 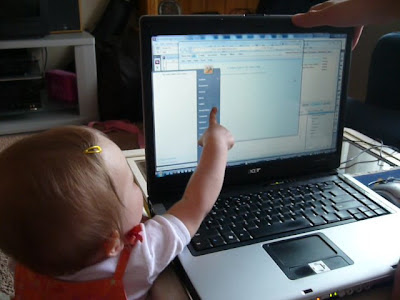 Open up that program, please!

She loves playing with keyboards, both piano and computer. She loves opening and closing drawers and cupboard doors (our pots and pans are in constant disarray). She loves turning on and off the lights. She'll eat anything: cantaloupe, pickles, salsa, random things off the floor. She likes to help feed herself. She can crawl up the stairs. She loves to try to ride tricycles and climb up the slide at the park. She loves to try to unplug things from electrical sockets and try to stick her fingers in them, even though this is strictly not allowed. 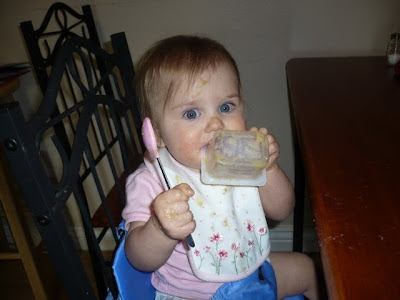 She loves to stick her fingers in anything small, actually.She doesn't dump the toy boxes out as often and instead will choose one toy to play with. She likes to try to pull the toys out through the small holes on the bins, which is very frustrating for her because nothing really fits through those holes, except for her fingers.

She doesn't like getting her diaper changed or getting dressed. She's scared of big animals and her grandpas. She doesn't like being told no but enjoys shaking her head emphatically back at us.

We continue to be amazed with how fast she is growing up. I miss my little baby Rachel, but it's been fun to watch her grow up so far. I just wish she'd slow down a little bit sometimes.
Posted by Nancy at 12:17 PM