Our neighbors across the way have a little tricycle for their daughter. As their father explained to me it's more of a communal trike. I believe they found it at the playground in our complex where there are plenty of disowned, forgotten, and often broken big toys.

Rachel has been coveting this tricycle for quite some time. Our neighbors downstairs will ride their bikes around outside with Emily, the owner of the tricycle. Rachel loves to stand in the window and watch them ride back and forth on the sidewalk. She likes it even better when we watch them while sitting on the lawn outside.

Yesterday we went out onto the breezeway to blow bubbles but Rachel's attention was instead drawn immediately to the gleaming red tricycle. She's a little young for tricycles so I tried to distract her by blowing bubbles in her path. It didn't work. She kept on her course.

She played with the pedals for a minute and then pulled herself up and banged on the seat.

"Uhh! Uhh! A mama!" she hollered at me and started to try to lift herself up using the handlebars, indicating to me that she wanted to be up on the bike like a big girl, so I put her on. 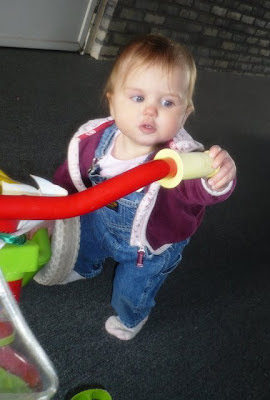 How do I mount this crazy contraption?

I pushed her around the breezeway a few times, which she enjoyed immensely. She was laughing and squealing the whole time. 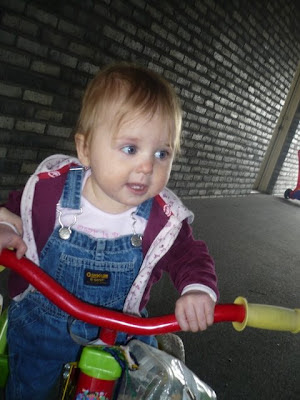 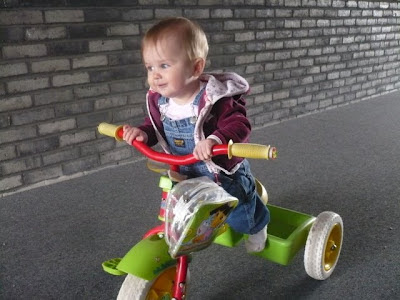 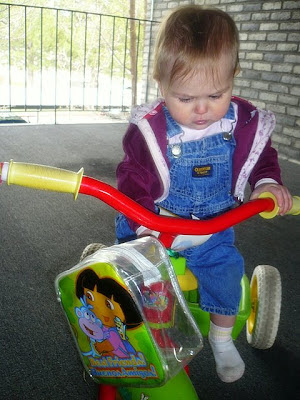 I wonder if this button makes mommy go faster...

Somehow she discovered that if she lay out on her tummy she could reach the back wheels with her tiptoes and push herself along. (No video, sorry...I was too nervous to do much more than a quick snap shot. I didn't even want to switch modes on the camera. I was too busy hovering). This is evidence that I have a very "busy" baby. A busy baby is one who can ride a tricycle by herself at only 8 and a half months. And you all wondered why I'm going crazy... 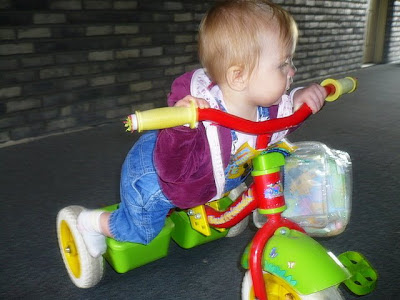 Our little neighbor Cory came outside while Rachel was riding around and they pointed and said, "Ooh!" at each other for a few minutes before Cory got on his own tricycle and rode around like a wild man while Rachel stared in awe.

Cory's mom brought out a little rocking horse for Rachel to play with. Something "closer to the ground and a little more safe for a baby." I dragged Rachel over to the rocking horse, while she tried to squirm out of my arms, and put her down on it. She didn't really like it even after I pushed her back and forth on it a few times. She just fussed, climbed off, and headed right back to the tricycle. 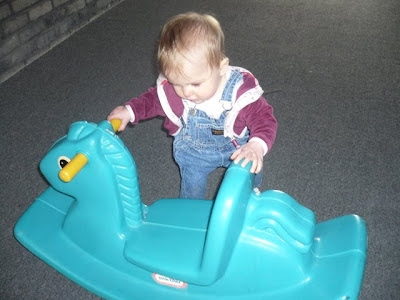 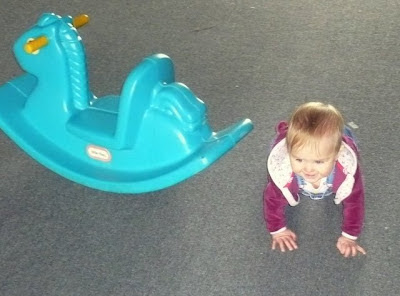 Now, that's what I'm talkin' about! 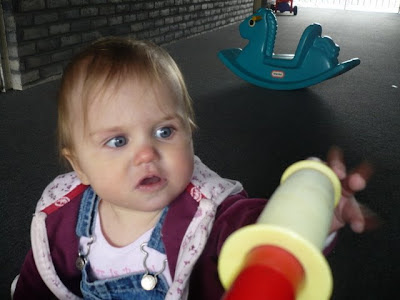 I don't know what we'll do in Cairo if we don't have daily access to a roof, terrace, garden, or park. We're considering getting a swing to take with us, although I'm not sure there will necessarily be anywhere for us to hang it up. 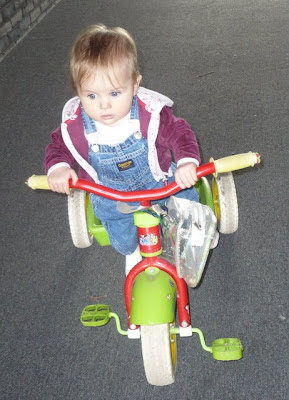 Do they have tricycles in Egypt, Mommy?

Living in Egypt isn't even my biggest concern. I know they have toys over there (yes, Rachel, even tricycles). It's the plane that worries me. Somehow I don't think they'd appreciate it if Rachel was riding a little tricycle up and down the aisles the duration of the flight. Trust me, if they would let her, she would do it!
Posted by Nancy at 12:59 AM