We have a little table that sits by our front door where Andrew dumps everything out of his pockets upon arriving home. He calls it "the landing pad" and he loves it. 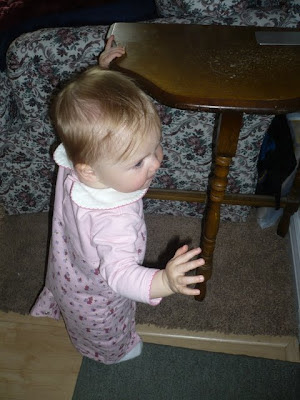 Rachel and the landing pad

It used to work well for keeping keys, wallets, cell phones, receipts, coins, etc. out of Rachel's reach when she first started pulling herself up on things. She was very content to just pull herself up on the couch and hit the cushions, or pull herself up on the table and bang on the glass. Eventually, though, she got bored with that and started seeking out challenges such as the kitchen stools, the TV stand, and the wall.

One of her challenges was the landing pad. It is rather lightweight and unstable and she has tipped it over more times than I can count. Sometimes she would tip it over and just fall onto her bum. Other times though, things ended much more painfully. She would pull it right on top of herself, landing backwards, smacking her head on the hardwood floor, with the table landing on top of her. 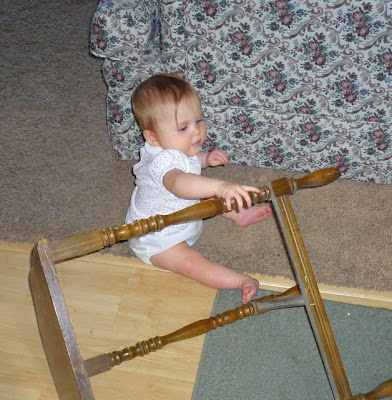 A less traumatic ending to a fall

On one of these more painful occasions, I rushed over to pick Rachel up and comfort her. She was screaming her "I'm HURT!" cry so I couldn't resist. Usually she just screams at the table offendedly, "How DARE you drop ME?!!" and she doesn't sound hurt at all. This time, however, I watched her fall flat on her back and the table beamed her in the forehead. Obviously it hurt.

While I was comforting Rachel Andrew went to clean up the mess. I can't remember quite when it happened--it was quite a few weeks ago--but it must have been a Saturday because Andrew was home and all of his pocket-things were on the landing pad when it fell over. His cell phone landed by the toy box, his keys flew over by the computer, and a number of other things had flown across the room.

He started walking towards the landing pad, tripped on Rachel's stroller, and landed on the upturned table, smashing it to pieces. It was also a bad fall. He was lying face down, with his arm twisted awkwardly underneath him, his face crammed against the door, and his legs resting at tortuous angles. He looked oddly like a chalk outline of a homicide victim. Before seeing him sprawled out like that, I had never imagined that a body could actually be in such an awkward position.

"Are you alright?" I screamed over Rachel. Andrew's fall had started her up again.

After a few minutes we got him up from the floor.

"That's the end of the landing pad, I think," I informed Andrew.

There was a little bit of splintering, but the table had only come apart at the joints so he was able to put it back together in minutes. So perhaps it really was a sturdy table, just a little wobbly and prone to tipping. 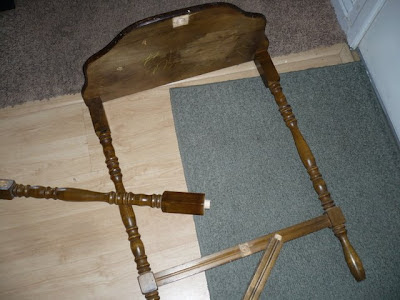 The interesting thing is that I noticed, a few days later, that Rachel could pull herself up on the table. She was very ginger about it, balancing herself using one hand on the table and one hand on the couch and very slowly moving from a squatting position to standing.

I watched her balance for a few minutes and then, once she was feeling confident that the table wasn't going to tip, lift herself up on her tip toes in order to bite the table top. Only then did the table start to tip over. Teething for Rachel is painful in more than one way, although she hasn't knocked the table over for quite some time. Perhaps she's learned something. 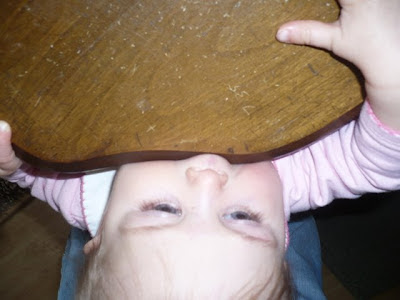