During his freshmen year at BYU Andrew lived in Deseret Towers, Q Hall, room 607 with his friend from elementary school, Ross. Nathan Dyer, who served in Andrew's mission, was also in their hall, as was Beryl. After their missions, Ross, Beryl and Andrew shared an apartment, but not for too long.

Andrew only lived there for a few months before he moved back home to save up money before we got married. Ross and Anna got married about a week after we did, so Ross wasn't in that apartment too long, either. Dyer got married back in August.

Andrew and Ross both graduate this semester and since we'll be moving to Egypt and Ross and his family will be moving to Pittsburg, we figured we should have a little get together.

So two weeks ago I started planning a party. I emailed everyone to see what day and time would work well and I thought I had it all figured out until Beryl talked with Andrew on Thursday and said that he couldn't come because he had a final scheduled. I have a sneaking suspicion that he didn't want to be the only single person at the party.

We had a good time without him, though. We had a pot-luck taco dinner. Andrew and I supplied meat, beans, toritilla shells and a few other things and our company provided taco toppings, beverages, and dessert. I think it worked out well.

Rachel had a fun time with Ross' baby. They dumped out almost all the toys and enjoyed poking each other. Rachel did most of the poking, by far. (We are really working on breaking that little habit of hers.) 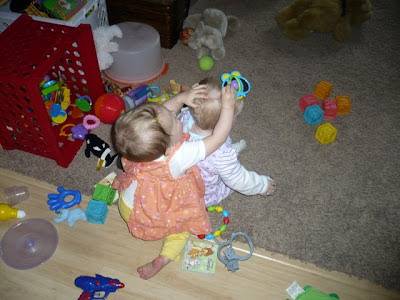 The party was a little short lived, which was unfortunate, but it is finals week and Andrew and Dyer, who are in the same Italian class, have a 7 am final and a big research write-up due tomorrow, and Ross and his family had to get home to put their baby to bed. It was nice to get to see them, even just for a little while!
Posted by Nancy at 11:55 PM