I wrote a little poem about all the things Rachel has two of and we've been planning on taking pictures of her to illustrate it so that we can turn it into a book. We decided that we had better get on that project since she is teething. She's had two teeth for so long that they found their way into the poem. Soon, however, she'll have six, which is quite a lot more than two. So this afternoon we went outside to try to take some pictures.

Unfortunately, Rachel is only nine months old and therefore refused to cooperate. She wouldn't do anything we wanted her to do, even if they were things she knows how to do and will do all the time (if we don't ask her to do them).

She wouldn't grab her ears. I don't know why because she's spent half her life holding her ears, twisting them, pulling them, folding them, rubbing them. She wouldn't touch her ears for anything. She wasn't going to show us her hands or hold up her socks or anything. She did not make a very good model.

So, spur of the moment I changed the line "I have two little teeth that I use to help me eat" to "I have two little lips on my mouth to help me eat." That still sounds kind of strange to me, but we figure that in a few months Rachel may well be more cooperative. Maybe. At least there's hope that if we try to do the photo shoot on a good day (read: a non-teething day) when she knows how to play peek-a-boo we might get a few picture that will work for the book.

She was cute anyway, so we took a few pictures. Just not the pictures that we would have liked to take. 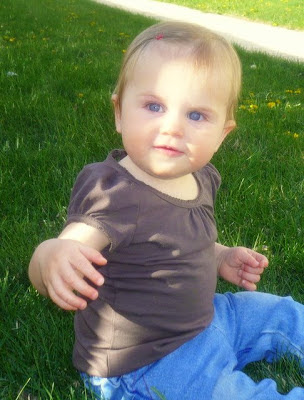 This, however, is a picture that I wanted to take. Rachel actually sat still for it. 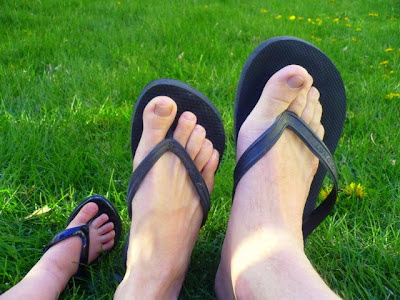 Andrew and I love flip flops. Rachel not so much. While Andrew could live year round in his flip flops--come rain, sleet, or snow--Rachel won't even stand up wearing hers. She just bends over and tries to pull them off her feet. Every year we have to go to Old Navy and get a new pair of flip flops. Andrew's tend to wear out faster than mine do, and I am about as anti-shoe as they come so that is impressive.

This year we both chose black flip flops and Rachel just happened to have inherited a pair of shiny black flip flops from her cousins. Maybe I'm strange, but I've been wanting to take this picture from the minute I realized we all had black flip flops.
Posted by Nancy at 11:01 PM