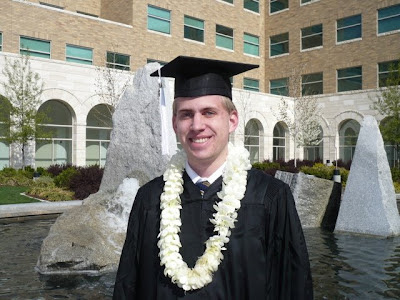 As of yesterday, Andrew is an official BYU alumnus. He did an amazing job balancing his roles as husband, father, scholar, and employee, among his church callings and other roles. We're glad that he'll be able to take a break from his studies before he starts up again in the fall! This will be the first time he's taken a break from school since coming home from his mission! He's worked straight through every spring, summer, fall, and winter semester taking a full load of credits and working 25 hours a week. It has been really busy!

At AUC, he'll only have to take 9 credits each semester and will only be able to work about 12 hours a week. That will be a change of pace!

Yesterday, Andrew's parents, Rachel and I watched Andrew do the traditional processional. It was so cold that it snowed while the graduates were making their way up to the Marriot Center! Unfortunately we didn't actually ever see Andrew, but we saw thousands of other graduates!

Elder Bednar was the keynote speaker.

Just as I was trying to remember who had spoken at my commencement excersizes, and about what, Elder Bednar said something to the effect that since no one remembers what anyone says at graduation, he'd be giving the graduates a gift: a shorter than expected speech.

He spoke about learning to love learning, among other things. Since this blog doubles as my brain, we'll at least be able to remember the topic he spoke on! 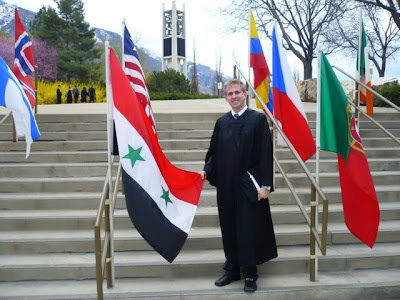 Andrew and the Egyptian Flag 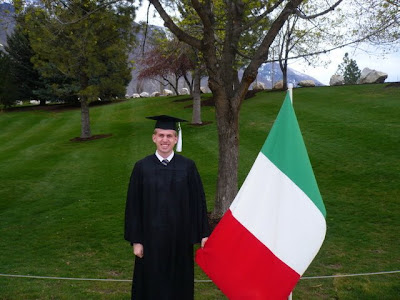 Andrew and the Italian Flag

Rachel was pretty good during the ceremony, except that she desperately wanted to touch the curly, white hair of the woman sitting in front of us. Between the three of us it was quite the chore to keep Rachel's hands to herself. She spent a lot of time walking around in the halls, and a little time sleeping, but mostly she was a well behaved baby. If only the same thing could happen at church!

When we met Andrew after it was over and went outside, the snow had all disappeared and it was warm and sunny. This weather is enough to drive anyone crazy. It's impossible to dress for! Andrew's parents took us out for a very quick dinner, before I had to head to a primary meeting. While we were on our way to the restaurant, Rachel decided she needed to fill up her pants and started making the strangest faces. 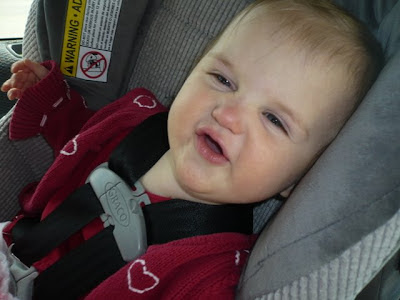 This morning we had to be on campus around 7 AM. It's a dreadful hour, I know, but at least we got to get his graduation ceremonies over with and know that we won't have to come to campus that early in a long, long time (perhaps forever)!

Rachel came to campus wearing pyjamas and bunny slippers. She was devestated that we woke her up before she was ready--not that we even meant to. I tried to put her in her carseat without waking her up, but I had to move her so many times in order to buckle her seatbelt. This arm, and that arm...she woke up and screamed for a few minutes but settled down once we were in the car.

She was even better behaved through this ceremony. We filled up almost an entire row, with Andrew's parents, my mom, David, Patrick, Josie and me. Rachel got passed up and down the row the whole time and didn't fuss one bit...until we tried to give her to Andrew, that is. 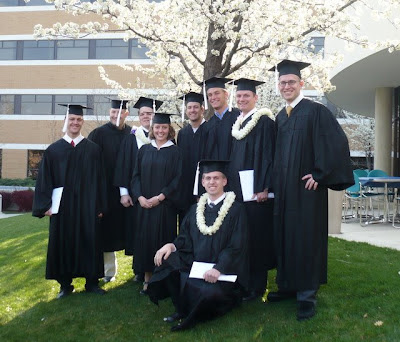 Perhaps she tolerated being with Daddy and his scary, scary hat because he got a lei (from the Kennedy Center) for graduating magna cume laude. She had a great time smashing the flowers and picking off the petals! 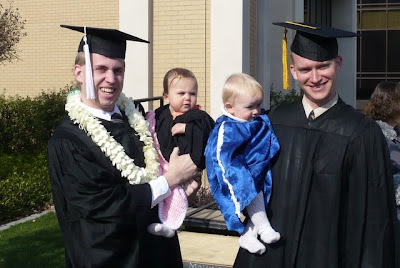 Andrew and Rachel, Ross and Thereesa 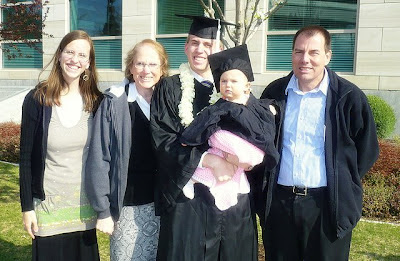 Andrew with his parents (and us) 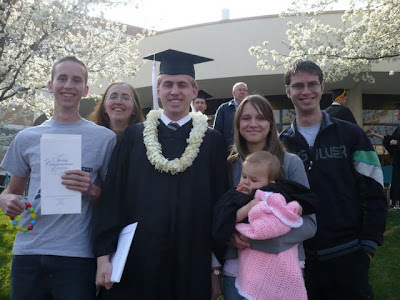 Andrew with my family 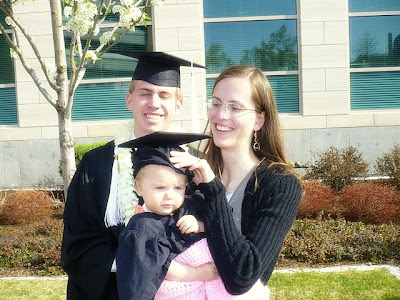 Mom, I hate this hat! 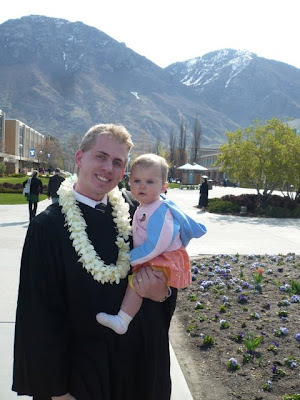 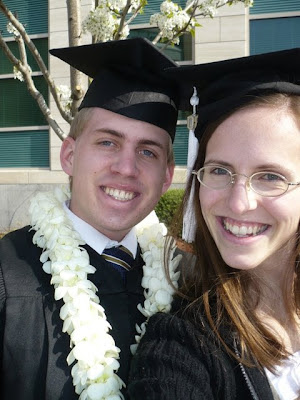 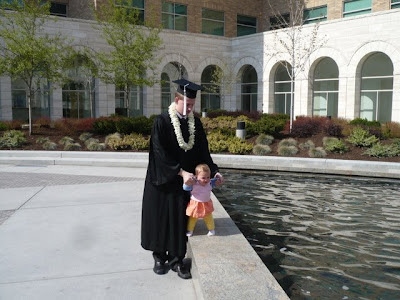 JFSB courtyard
We walked around for a little bit taking pictures, but it was still rather chilly. The tree that we took David's graduation pictures at hadn't even blossomed yet this year! We decided that we would take our "farewell to BYU" pictures when it was a little bit warmer. Andrew will still be on campus everyday this summer, so it isn't like we're actually leaving yet!
Posted by Nancy at 5:52 PM