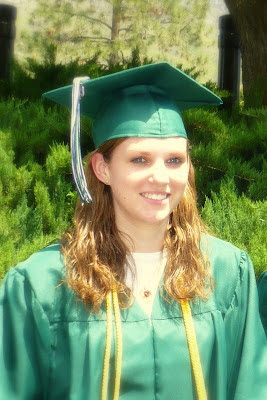 Emily graduated from high school today. It's kind of strange that we both graduated so long ago (five years is a long time ago at my age) and now our siblings are all graduating in rapid succession. Andrew's three youngest siblings are each just a year apart. That would make anything go by fast. Katharine graduated and we had a little break until Sarah and Patrick graduated. Now Sarah's graduated and Jacob will graduate next year. 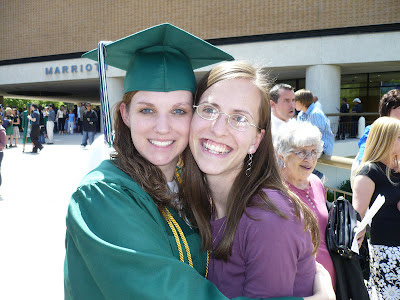 Anytime I want to feel old, I just look at the pictures of our siblings at our wedding and then look at them now. Andrew and I haven't changed much in 2.5 years, but Patrick and Jacob have grown so tall and Josie is just turning into a little woman. It's crazy how fast time is flying, but we're so happy and proud of Emily! She'll be going to BYU! Yay, Emily!

We had a bit of a long day today. Emily's graduation wasn't until noon, but Andrew had to work in the morning, so Rachel and I just went to campus with him in the morning. We visited with my mom in her office, where Rachel showed off her walking skills. She loves when people ooh and ahh over her. We also played in the fountain at the JFSB and visited Uncle David's office and Special Collections.

At noon we headed up to the Marriot Center to watch her ceremonies. Rachel was a good girl, but she kept pulling out her hair and was, once again, afraid of all the people in strange hats. 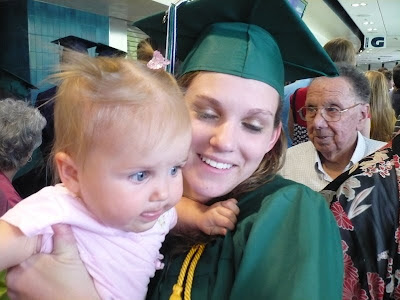 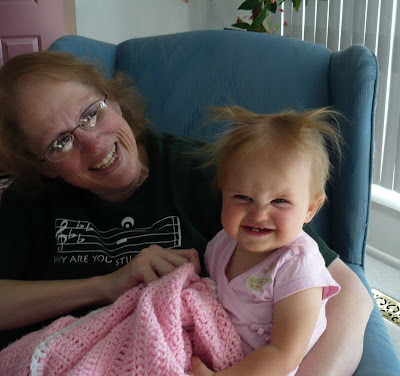 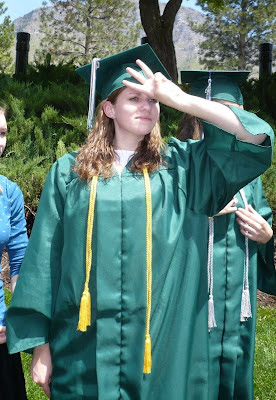 You're a woser!
My favorite speech was given by Deborah C. Taylor, who represented the Board of Education. She told a story about a time when her uncle and father were teaching her and her cousins how to fish. They showed them how to bait, and cast, and do the other things you do when you fish. I don't fish so I don't know what those things are.

They weren't too successful, but they were determined to catch a fish so they just kept at it. They caught a tennis shoe, snagged a weed or two, but really had no luck at all.

The grown ups came to check on them again and told them they were doing just fine and that fishing takes patience so they should just keep at it.

While they were walking away, she heard her uncle remark to her father, "There haven't been any fish in this stream for years, but it ought to keep them occupied for a few hours."

Her point was that there are so many things in life that waste our time--fishing in a fishless pond. But there are also many things in life that are never a waste of time. She listed four of these things:
And that was pretty much her speech. Short, simple, to the point, and very profound, I thought. Perfect for a graduating high school senior to listen to, and perfect for me to listen to. Who thought I would learn so much from a high school graduation speech? Apparently I've been thinking about fishless ponds a lot lately because I drew my similar own allegory from a croquet game today.

Anyway, we took so many pictures, it was hard to decide which ones to put up, so if you want to "steal" any of these, let me know and I can send you the full quality pictures.