If you give a baby a muffin 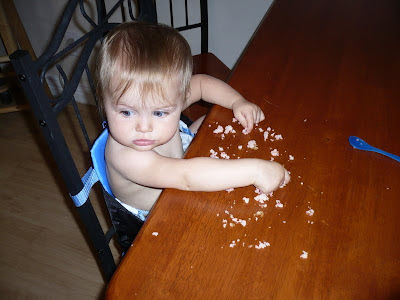 She really wanted to eat it but she couldn't figure out how because she had already filled her "storage units" full to overflowing.

Rachel's hands often store things for her. For later. She always reserves 1 or more pieces of whatever she was eating just in case she gets hungry later. So, if she happened to be eating Trix, she'll keep 1 or 2 in each hand as she goes about her day. At first it is hard for her to play because she has to hold onto her Trix. She'll use just her index finger and thumb and can't get a whole lot done. Then 10 minutes later she'll forget and accidentally pop open her hands, exposing her hidden treats. She'll get all excited and eat them and clap her hands, hoping for more. Ten minutes later, she'll open her other hand and surprise herself with yet another handful of treats.

We try to avoid this since it makes things sticky, but she's so good at sneaking away with handfuls of food. I can wash her hands and empty her storage units and then find her with food in them a few minutes later. She scavenges. Under the high chair. On the table. The cracks in the kitchen floor. Gross, I know.

So anyway, this morning she had filled her storage units up so full that she couldn't even risk using her index finger and thumb to grab more crumbs of muffin.

Every time I took a bite of my muffin she would whimper.

"You have some muffin right there, Rachel," I said, giving her a bit of her muffin crumbs from off the table.

She looked at me like I was talking crazy. Eventually, though, she gave up trying to hoard half her breakfast and ate (most of the) rest of her muffin.
Posted by Nancy at 10:57 AM