I can't believe how long ago it was that I went to Russia to teach English. It's been a long time. Esther, Stephanie and I all have since graduated from BYU with our bachelor's degrees. Stephanie is now working on her master's degree. Michelle, Staci, Emily, Esther, Natalie, and I have all gotten married and a lot of us have children now, too!

Esther's little guy is over a year old. Rachel is right on his heels. Staci is almost ready to have her second one! Emily is expecting her first. 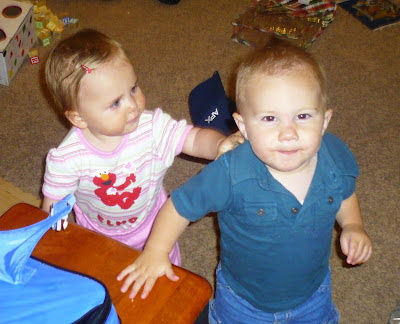 Rachel and Robby
Stephanie is engaged. Tiffany just got off the mission (to Novosibirsk) 6 weeks ago (and I don't want to spread any rumors but she is here visiting her boyfriend so glean from that what you will).

It just doesn't seem possible that all those things could happen in the short time we've been back. But I guess we haven't really been back for just a short time. It's been like 4 years!

Since Tiffany was in town, she and Esther (and Rob and Robby) came over to our house for pizza and to reminisce about the past and talk about the future. It worked out well. We figured that it would be more fun for Rachel and Robby to play while we ate than it would be for them to have to behave at a restaurant.

Tiffany said the prayer on the food in Russian. Her accent is stellar. I understood everything she said, and I could say everything she said, but I couldn't possibly say it as well as she said it. Ah, if only singing hymns once a week in church could keep my language skills up. Unfortunately that just doesn't seem to be doing the trick.

It was so fun to spend some time with Tiff and Es. I am so jealous of everyone going to Steph's wedding! Three days! I'm missing it by three days! You all better send me lots of pictures and take detailed notes of everything that's going on! I miss our sleepovers, even if we were all squished on two beds, a couch, and a chair in a musty apartment with the wallpaper falling off the walls and cigarette smoke wafting up through the bathroom floor. I miss it all! 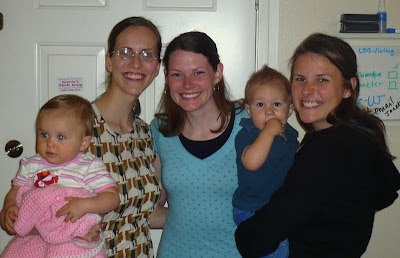 Me and Rachel, Tiffany, Esther and Robby

I miss running over the river, smelling the lilacs, walking up the dingy stairs to the top floor because there was no elevator, and checking to see if they had any fluffy pillow cereal at the Five-store.

I miss singing in the branch choir, teaching our kids, eating mystery meat for lunch and watching for gypsies in the market.

I miss slogging through snow to catch the 16B, and then walking the short distance through the trees to my apartment. I miss playing dominoes with Alosha. It was the only game he had. That and face cards. We played Spoons a lot.

I miss watching Russian music videos and TV game shows that I never really understood. I miss watching DVDs where one person does the voices for all the characters. I miss waiting for all the kids going to swiming lessons to tramp through our classroom. I miss talking about books in the Basic Reading classroom.