Trouble with the in-laws

The day started off just right: Andrew took Rachel and let me sleep in while he made me some breakfast-in-bed. I had a shower...by myself, which mean that Rachel didn't turn the water too cold or too hot. I got dressed, nursed Rachel until we both fell asleep and slept almost until it was time for church. Then we went to church.

After church we went to Andrew's parents' house for dinner. His grandparents were there and we wanted to visit with them some more since we hardly got a chance to at the airport.

Rachel was, of course, up to her little tricks. She's normally pretty shy around new people, and takes quite some time to warm up to people she knows sometimes. Since her great-grandparents are new to her, everyone else was safe territory. She would snuggle with whoever was holding her, smiling her coy little smile. 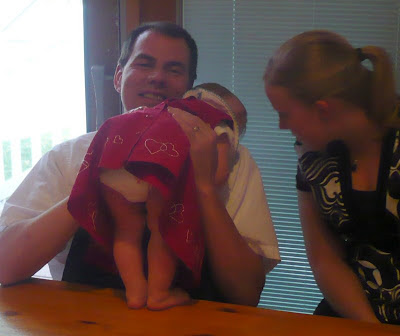 She even willingly went to Grandpa. Of course, he had stopped by on Saturday to take her to the park, thereby forging a friendship with her. Now you know, if you want to be Rachel's friend, take her to the park and let her eat a handful of dirt or two.

We were having her show off her little tricks. She knows where eyes, ears, mouths, and noses are and will point to them if you ask her to...but only if she's feeling motivated. She was sitting on Grandpa's lap and Andrew asked her where his nose was.

In response she stuck out her little pointer finger and waved it around, blatantly refusing to point to his nose.

"Hey!" said Reid, offended, "What are you saying?"

Reid turned to look at me.

"I used to like you..." he said, turning away snobbishly.

"No!" I tried to correct, "I wasn't saying that about your nose! I was saying it about Andrew's nose!"

I'm not sure that fixed things.

Andrew and I often gently tease each other back and forth about a number of things. He's made a jab or two about my toe-thumbs and I sometimes make remarks about his nose.

He deserves it. Anyone who can say, and I quote, "The baby just stuck, like, her whole hand up my nose!" deserves to be teased about the size of their nose. (But it's a really cute, big nose, honey!) 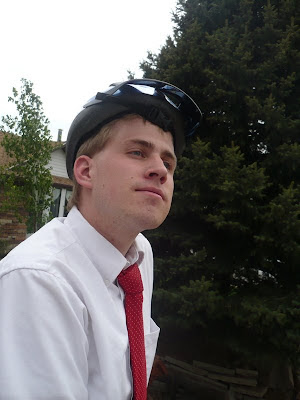 Andrew sporting his mother's bike helmet
But as my dad said last night when Rachel was searching for his nose, "How can you miss it? It's right in front!"

So really, whether a nose is big or small, it's kind of hard to miss.
Posted by Nancy at 12:41 AM