A bunch of us housebound women were waiting for the mailman to finish sorting the mail. Actually, there were just three of us.

Maria and I happened to be outside with our babies when we saw the mailman drive up. Sister Sorensen was out waiting for her grandson to meet her. Maria knows Sister Sorensen fairly well since they live in the same breezeway, but I don't really know her all that well.

See, Sister Sorensen doesn't go to church because she's apparently allergic to the stuff that they use to refinish the wood floors. That might be a valid argument except that our building doesn't have wood floors.

Anyway, Andrew knows her. He takes the sacrament to her quite frequently, at least he did when Ryan was the coordinator for that.

"Nancy. Nancy Heiss." I felt like James Bond, minus the junior bit.

"Andrew's wife!" she gushed, "And this must be your new little baby, though she's not so new anymore! My, how time flies! So, you're off to Egypt soon! I'm so excited for both of you! You know, I just adore your husband..."

She seemed to know everything about us--and many other people in the ward. Amazing, since she never goes to church or any church function at all. I always thought the Relief Society were the gossipy ones but apparently the Elders who take the sacrament to the housebound are far worse.

She seemed excited that our ward meeting time and location is changing. We'll now be meeting at the stake center at 9 AM instead of at the other chapel at 1 PM, which is so much better for naptime! I wonder why she was so excited though since the stake center does have wood floors that get refinished.

I was glad for the opportunity to talk to her, though, because she reminded me how much I love my husband. He's pretty much amazing! He's funny and charming and to tell the truth, Sister Sorensen is not the only older woman to be smitten with him. Sorry, ladies, he's mine.

He's still making me laugh everyday, just like he promised he would.

Today at dinner I decided to help him live longer. He's kind of nice to have around. We were eating pancakes, and although he was eating them with applesauce and strawberries, I thought he might need some prodding to eat some fresh fruit.

"If you cantaloupe," he said in his most sardonic voice, "Just get married."

Andrew cut into his pancake and started eating it. I started laughing.

"What are you doing?" I ignored his comment about the joke. It really was more lame than funny.

"You're holding the cantaloupe," 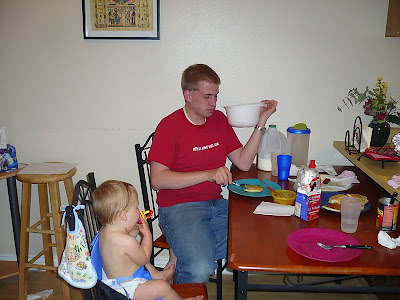 When I said to have some cantaloupe, I meant to eat, not to hold. Andrew did end up eating some cantaloupe, much to Rachel's chagrin. She loves cantaloupe. She'll eat piece after piece, shrieking when she's finished. She just can't get enough.
Posted by Nancy at 12:54 AM