After Emily's graduation party the few of us left behind played croquet.

I haven't played croquet for a long time. And almost every time I played it previously was in my grandma's backyard in Raymond with my siblings and/or cousins. We were almost always being completely goofy so didn't follow the rules of the game. Thus, I never really learned the rules of the game.

Andrew's parents were out taking Rachel on a walk, so Jacob tried teaching us how to play the game properly. He set the wickets up helter skelter, just like we would do when we were kids, and then he started explaining that we would go through certain ones on the way there, skipping several wickets, but then getting them on the way back; that you could move your ball in order to hit someone else's ball; and any number of rules that just didn't make sense to us.

So we made up our own rules and played two games that way. Jacob only played through the first round and then got frustrated and went inside. 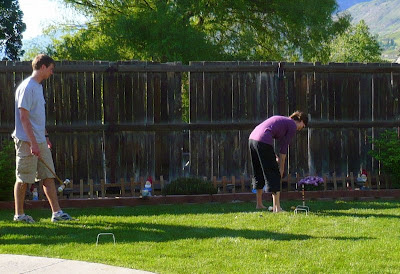 When we were in the middle of our second round, Jacob came out with the phone.

"James!" he yelled as he walked outside with the phone, "The phone is for you! Your family's called three times! Just go home!"

Of course, we had no idea the phone had been ringing because we were outside, so we were wondering why Jacob hadn't answered it. He had been reading and was wondering why we hadn't answered it since he yelled "PHONE!" Naturally we didn't hear him yelling for the same reason we hadn't heard the telephone ringing in the first place. We were outside.

"Hey!" said James when he got the phone, "Yeah, I'm playing crochet in the backyard with Andrew and Nancy."

There was a pause on the other end where we'll assume his mom said something along the lines of, "You're playing what?"

Andrew and I started laughing, "Croquet, James! Yeah, we're having a nice round of crochet."

He hung up the phone, "Phillip's coming over. I'm in charge."

His little brother ran over, "Mom and Dad are leaving. You're in charge of me. I'm going to Ian's! Bye!"

And with that we were back to our crocheting, er, croqueting, with James in charge. The game was rather confusing and pointless and we, like Jacob, were getting frustrated. 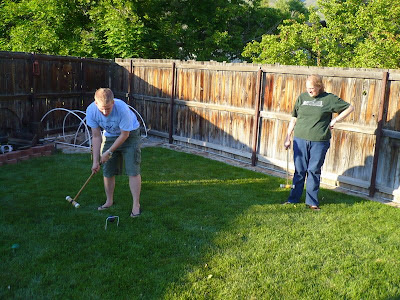 Then Karen wheeled Rachel into the backyard. When she saw our set up she exclaimed, "What are you doing?"

She taught us the rules and amazingly enough, croquet suddenly seemed a lot more entertaining. We no longer felt like we were aimlessly hitting balls around the lawn, but that we actually had a purpose and could strategize.

Let this be a lesson, Rachel (and future children), following the rules can actually make life more interesting and less restrictive. Go figure. It's a hard lesson to learn, but if you can learn it from croquet instead of from real life you'll be much better off in the long run. 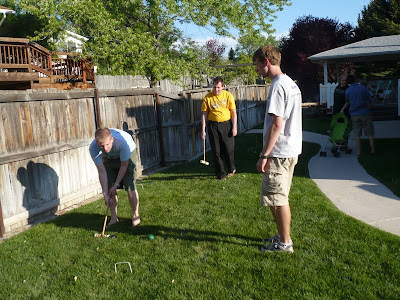 "We should take this to California with us and play on the beach!"

"Have you ever tried to golf in sand?" I asked. I haven't, but I hear it's difficult.

"That will just make it more exciting! We should take it with us to Grover, too!" Apparently Andrew finds croquet more fun than horseshoes. 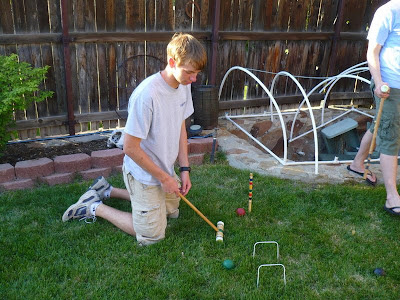 Hey, James, that mallet looks a little small for you... 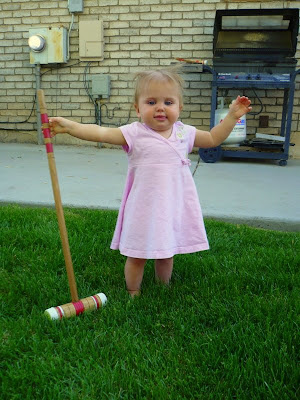 Hey, Rachel, that mallet looks a little big for you!
Rachel had fun playing the backyard, too. The balls were so heavy that she couldn't lift them with one hand. She would pick them up with both hands and try to throw them to Grandpa, but more often than not would just drop them on herself. She never gave up trying though! 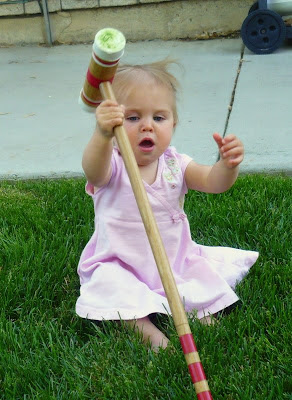 And what do I do with this? 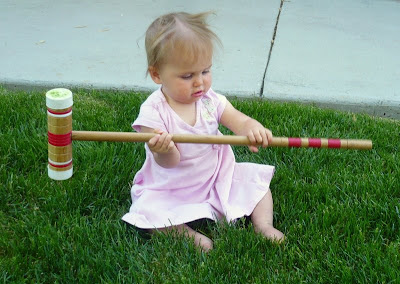 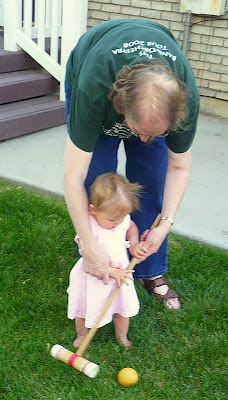 Grandma, will you show me how? 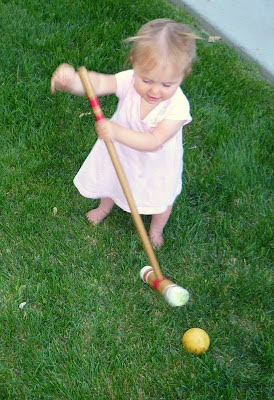