Dancing with the stars

We have stake conference tomorrow night, so we went to Jacob's ballroom concert this evening instead. It was fun! It made me want to be on stage again! I'm so glad that the ballroom program is still alive and well at Timpanogos, even with Alison retiring from coaching. The new coach seems to have done an excellent job of taking the team through the transition.

Jacob was in quite a few numbers again this year. He's very energetic, that's for sure, getting his groove on for the disco. I was partial to disco, too, Jacob, it's alright. 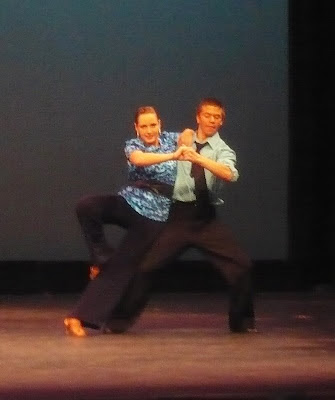 Not the disco number, still energetic

When Rachel saw Uncle Jacob after his performance she was a little wary of his faux tan and sweaty hair, but she warmed up with him when he offered to let her sit on the T-wolf. 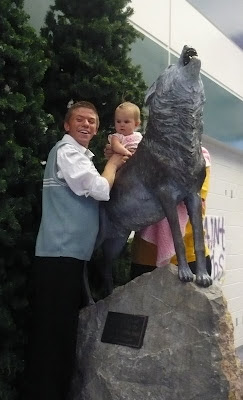 She really enjoyed the dancing though, often bopping up and down to the beat. The show was a little too long for her, though, and by the end of it she was pulling both of her ears and trying to fall asleep. She didn't though. She stayed away all through the concert, and all the way home, only to completely lose it the moment we walked through the door.

So, there was no teeth brushing, and no pre-bedtime potty break. She went straight into her pj's, had a little nurse, and then went, very willingly, to bed. I suppose staying out past bedtimes can have its benefits.
Posted by Nancy at 1:50 AM