Rachel spied a book on the bookshelf that she desperately wanted to read. It's the one laying on its side by the (sometimes violent) panda bear's feet. The only problem was that she had already pulled out the toy box, and the box of blocks, and had scattered toys all over the floor, rendering the bookshelf inaccessible. 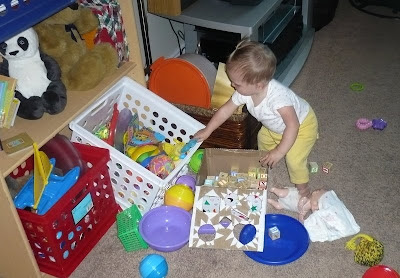 She could have walked or crawled around her mess to the red bin, but that route was too easy. So instead she climbed in the box of blocks ... 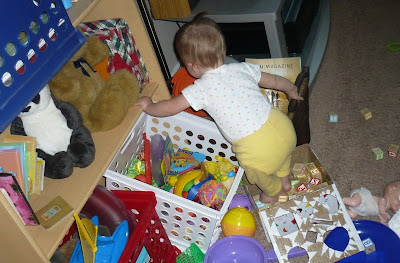 And from there into the toy box... 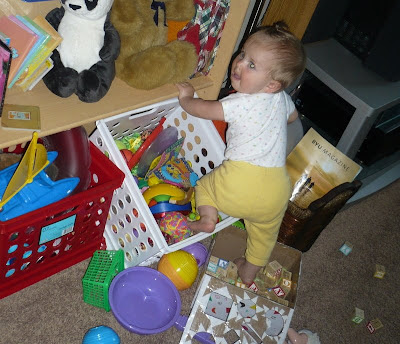 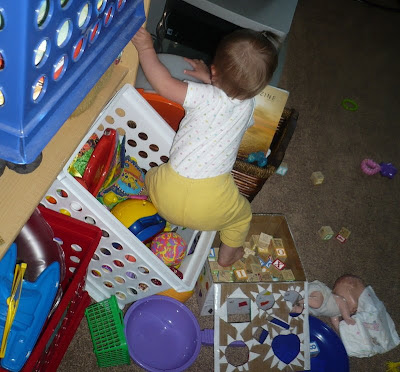 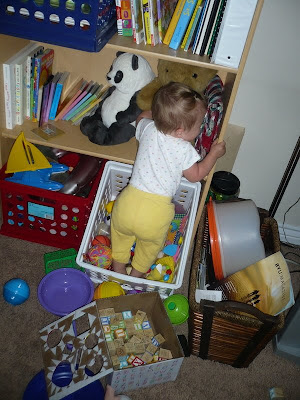 She shuffled towards the book as far as she could without tipping the bin over, only to realize that she couldn't lift up her hands to get the book without falling backwards. After trying her hardest to reach the book, she gave up and instead worked on getting out of the bin. 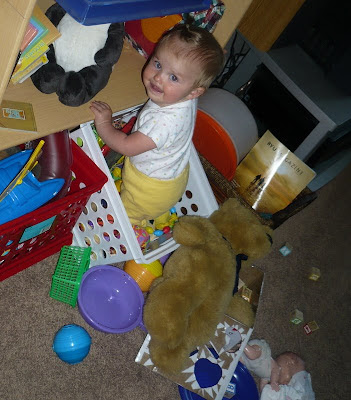 Getting out of this situation was a lot harder than getting into it...so Mommy had to rescue our crazy monkey.

As soon as I had her in my arms she stopped screaming and squirmed to get down, so I put her on the ground and she sped off to get that book. She grabbed it, and smiling broadly, held it up to me.

It's in Arabic. We have five children's books in Arabic and I can only read two of them. Those two have one word per page. I can handle that. The others have full sentences in fusHa, which is too complex for me at this point. Andrew actually struggles with them, too. They're fully voweld, Koranic sentences, and he stumbles over them, too, but not as much as I do!

Dejected, Rachel crawled over to Daddy, carrying the book in one hand, and offered it to him. After a short tussle about which direction the book should be read--Arabic books read right to left, which confuses Rachel and she tries to have us read them from finish to start instead--Andrew read her the story.

That was a lot of work for one little story.
Posted by Nancy at 5:48 PM