Grandpa Frank and Grandma Sharon just arrived home from their second mission. They aren't released yet though! They will still be working as full time missionaries until June but were sent home so that Grandpa Frank could get an operation and be able to recover in the comfort of his own home. 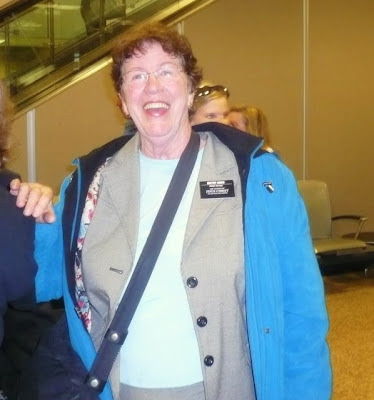 They've been serving in Frankfurt, Germany, for the past year and a half as humanitarian service missions. They were responsible for training and supervising the humanitarian efforts in Eastern Europe and the Middle East, which means they got to do a lot of traveling: Romania, Lebanon (where they served their first mission), Egypt, Jordan, Albania, Croatia, Moldova, Serbia, Slovakia, Syria. They most recently went to Holland on a little vacation to see the tulips. 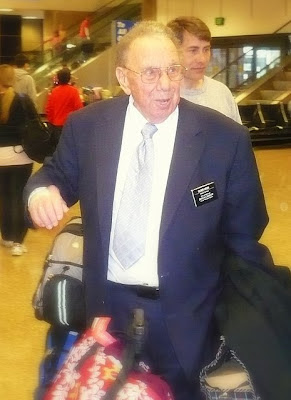 That's when Grandpa Frank really started to feel sick. They had been planning on stopping by Holland to see the tulips on their way home but then they extended their mission in order to continue serving until their "replacement" couple arrived. After they extended they still had permission to go ahead with their travel plans.

Little did they know, they'd end up coming home a week or so later!

We're happy to have them home safe and sound though, and hopefully Grandpa Frank* will start feeling better soon.

Rachel had a blast running around and making friends with people. She went up to visit a cop on a segway and he flashed his lights at her. She waved hello and goodbye to a multitude of passengers and flight attendants, many of whom wanted to know her name and how old she was. She ran around and around and around with her grandma, visiting the baggage carosels and sliding down banisters. She was making friends left and right and was as happy as could be. 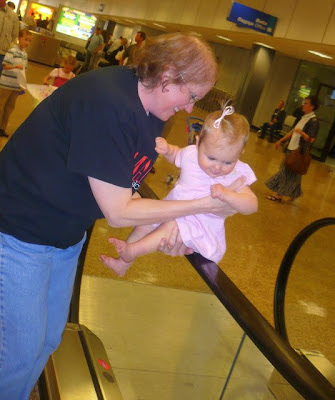 And then her greatgrandparents showed up. Then she wasn't so brave. She didn't want them to touch her or hold her, but she did eventually give a few shy smiles. I suppose they were a little scarier than the other strangers because they didn't just wave and move on. They stopped and talked to her and tried to give her hugs and kisses and she just wasn't too sure about that at all!

She'll get to know who they are soon enough. Welcome home, Grandma and Grandpa! 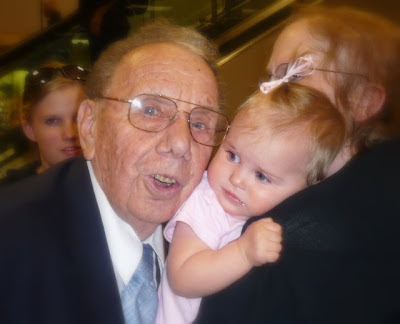 Rachel shying away from Grandpa Frank 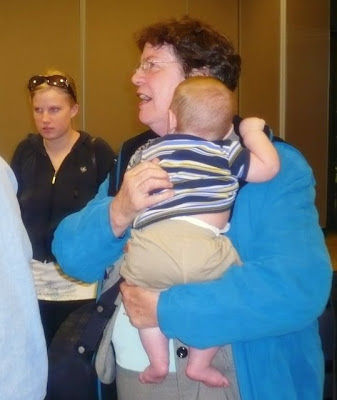 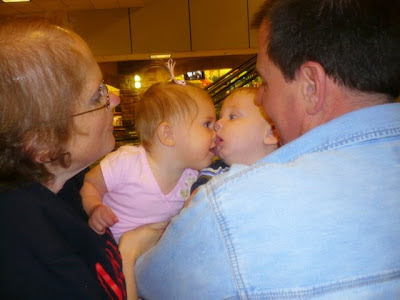 Rachel's not afraid of Kayl! 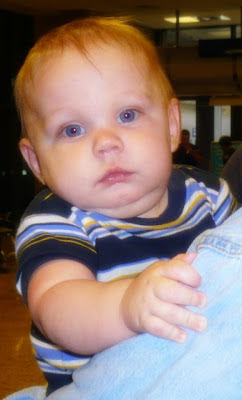 Such a handsome boy! 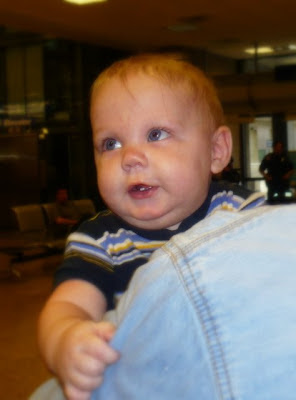 *Man, I just typed Uncle Frank. I suppose I should openly apologize to Grandpa Frank for any time that I may call him Uncle. I can't tell you how many times I've prayed for "Uncle Frank and Grandma Sharon" while they were out in the mission field. It's just that I grew up associating the name Frank with uncle-ness and sometimes it still just slips out.
Posted by Nancy at 12:04 AM