We let Rachel eat most of her dinner while sitting on the floor today. It was a MYOLO* day so Andrew and I had leftovers and ate while wandering between the microwave and kitchen table. Rachel got to eat on the floor because we're responsible parents like that.

"Don't spill," I cautioned her before setting the bowl in front of her.

Two seconds later she picked up the bowl and purposely dumped it all over the floor. Truthfully I knew it would happen but I was a little disappointed that it happened so soon. 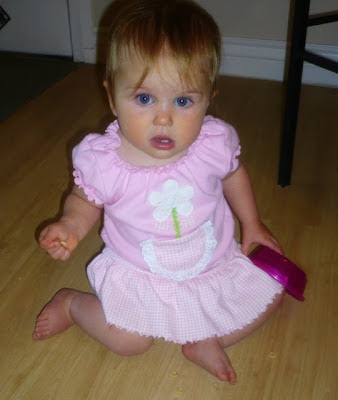 "Oh...you said to not dump them out?"
"Technically she didn't spill. She dumped." Andrew interjected, making me wonder whose side he was on. I shot him a hey-back-me-up look and he quickly cleared up what he meant by tacking on, "She clearly did that on purpose. Spilling is accidental. Don't dump, Rachel."

We picked up her cereal and put it back in her bowl. 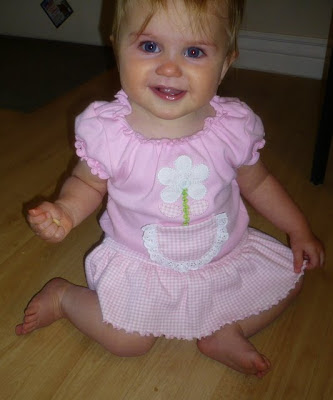 "Okay, mom!"
She picked up the bowl and put it up to her mouth. I can only assume she was trying to drink the Cheerios, which was a very effective way to spill them all over herself. She only tried that method once, thankfully.

We picked all the cereal up again.

"Seriously, baby...just take one at a time!" 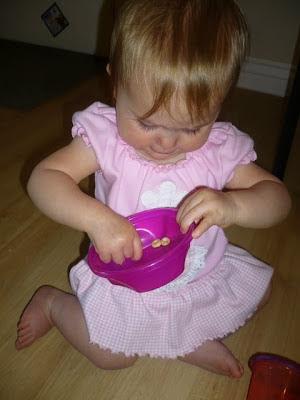 "But one-at-a-time is so tricky!"
After dumping them out probably fifty times more, and kicking them over once, she finally got the hang of taking only one (or two, or three) and thoroughly chewing before attempting another mouthful. 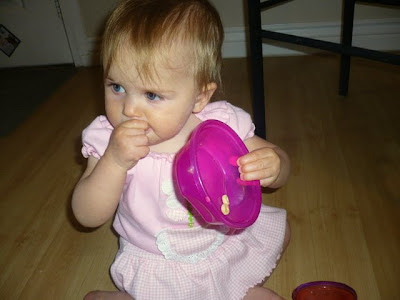 She was so proud of herself when she had eaten them all. She showed me her bowl.

She clapped her hands for herself so I clapped with her. She claps every time I say "all gone," "all done," "good job," "yay," and a number of other phrases. It's like she knows what comes next. 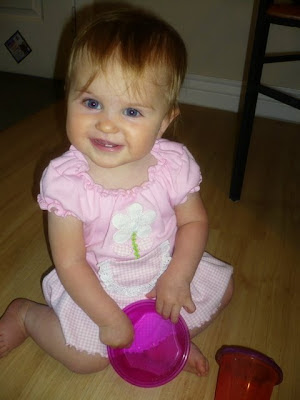 After she was finished eating I walked into the living room where Andrew was sitting on the couch and I expected Rachel to follow me but instead she started heading the opposite direction.

She pulled herself up on her chair and grabbed the lid to her bowl. Then she sat down and, holding the lid with one hand, picked up her bowl with her other hand. She looked at the lid. She looked at the bowl. She held them really close to each other, scrutinizing them.

Upon deciding that they did indeed fit together she put the lid on the bowl and then put them on the ground and pressed them together. 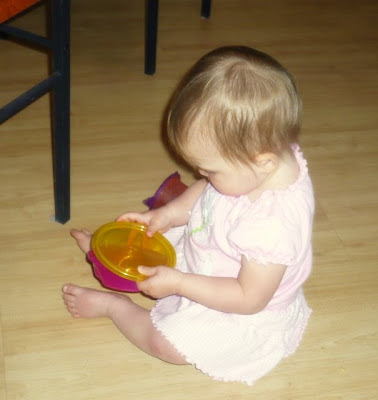 I thought I filmed it, but apparently I was too enthralled to push the record button. We were both so impressed; not only had she remembered where I had left the lid but, she put the lid on the bowl! Quite successfully, too.

Andrew examined her work and found the lid to be securely sealed almost the whole way around the bowl. She's so responsible! Learning how to take Cheerios one at a time and put lids on bowls in the same day! Soon she'll be washing the dishes!

I think it's cute that she put it on the floor and then pressed on it with all of her upper body strength. Apparently someone's been watching Mommy fight with the tupperware because I usually end up having to put the container on the counter and use all my concentration (and upper body) to get those dratted lids back on!

*MYOLO stands for "Make Your Own/Leftovers Day." In Andrew's house growing up it was YOYO, which stood for "You're On Your Own," which is cute but he couldn't remember it when we were making up a name for such a day. Who knows whether MYOLO or YOYO will win out?
Posted by Nancy at 8:15 PM