I pulled my hair into a ponytail today while Rachel was sitting on her potty. More often than not, motherhood is easier with a ponytail.

As I was wrapping the hair elastic around my fistful of hair I noticed something hard and crunchy in my hair. I stopped to feel around for a bit. In my hair I found a lollipop stick. Lovely.

Ordinarily Rachel is, by default, blamed for any foreign objects in my hair. However, I knew she was not guilty in this case because she doesn't eat lollipops yet and we have no lollipops in our house and I don't even know where she would get a lollipop, or even a lollipop stick, for that matter.

I picked the stick out of my hair, thinking back about when and where I would get an icky, sticky lollipop stick stuck in my hair.

We sat through a few skits waiting for Josie to get on stage and midway through one of the skits I felt something hit the back of my head, followed by a chorus of boyish giggles. I learned early in life that the best way to deal with boys is to ignore them, so I did. I'm quite sure they were the cause of the lollipop stick getting stuck in my hair.

It's amazing to me how boys grow up to be men.

I'm sure those boys had good intentions though. They were probably just trying to flirt. I'm often mistaken for a teenager. How were they supposed to know I'm a full-fledged member of the grown-up society?

Forgetting about the obnoxious, hormone-crazed gentlemen sitting a few rows behind us, I settled in to watch Josie's little play.

It was called "The Babysitter" and featured a number of very naughty children. My mom was sure to tell Rachel that this performance was an excellent example of how not to behave. 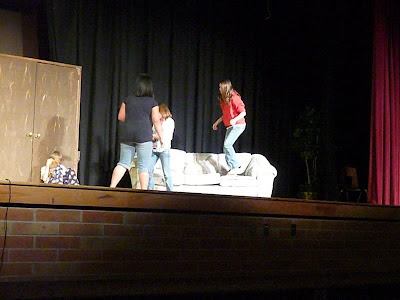 Josie jumping on the couch

She did a good job! It's always fun to watch her perform. I also enjoyed watching several impersonations of Gollum and the many skits where boys pretended to fight and shoot each other, though not nearly as much as watching my sister on stage.

Rachel liked looking at the lights and trying to communicate with another baby she saw on the opposite side of the auditorium. She had a lot of fun sitting with Auntie Josie and her friends--they were giving her jewelry, cellphones, and other little gadgets left and right. 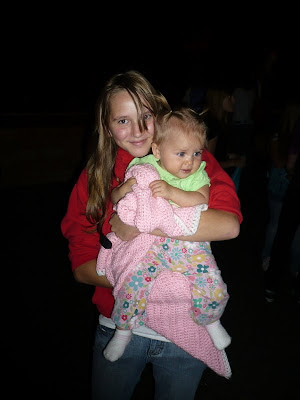 Rachel and Auntie Jo at school

I'm so glad I'm not in junior high anymore. So very, very glad. The hour I spent in junior high today was enough to last me for the next few years. My hat is off to junior high school teachers. I wonder how I ever survived the two and a half months I taught junior high. I can't believe I thought that I would actually enjoy that...
Posted by Nancy at 1:59 AM