Partying sure is different when children are involved! What would be an intimate setting of seven or eight suddenly multiplies to three or four times that, once spouses and children are added in! I'm telling you, we're like rabbits!

Our parties also start and end a little earlier than they used to. In fact, our party was over by the time our parties used to start. Guests started arriving shortly before 6 PM and everyone had left by 8 PM. Bedtimes are very, very important.

This year Shallee offered her cute little house to host the party at. It has a nice fenced-in yard and she has a decent-sized living room. Our family was the first to arrive and after a few minutes we were began to wonder if anyone else was going to show up. Luckily, most did! 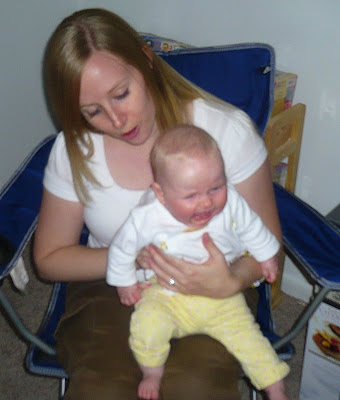 Shallee and Rachel A.
Becky couldn't make it because she was sick. I didn't really give Cristina enough notice. And my brother had class. Other than that, we all showed up. All 22 of us! That's right, 14 adults and 8 children. Let's see if I can name them all... Amber, Scott, and Andy; Kristi, Rachel, and Kimberlee; Joy, Joe, Karen, and Rachel; Me, Andrew, and Rachel; Shallee and Dan; Shaille, Casey, Matthew, and Kelsi; Rebekah and Nathan; and Matt. 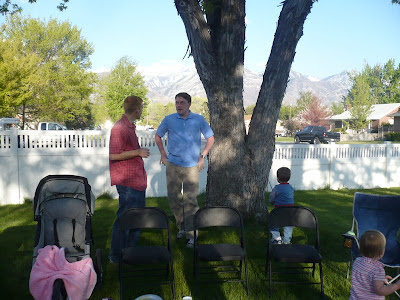 The weather was good enough that we were able to eat outside, although it did get a little chilly so we ended up moving inside. 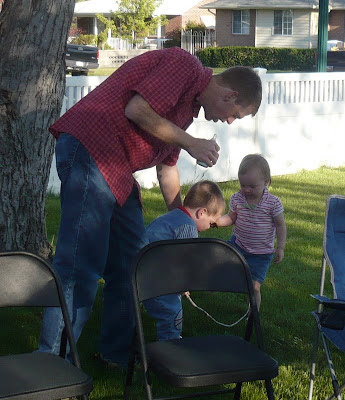 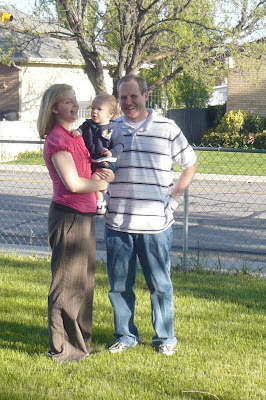 Shallee let the kids look at her rats. Our Rachel was a little nervous about them. She would walk right up to the cage and stick her fingers inside but when the rats would come up to sniff them she would jump and scream. Andy was definitely in his element. Karen and Rachel D. were a little braver than our Rachel, but not near as brave as Andy. Matthew just isn't afraid of anything. 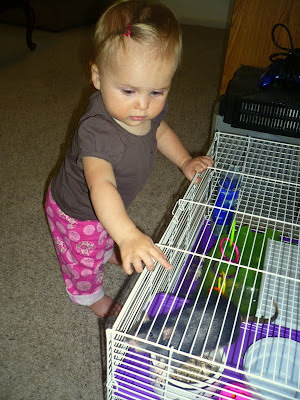 The kids were definitely the stars of the party. They were so funny. A little shy at first, perhaps, but that's because we don't get together all that often--Joy lives in North Carolina, for crying out loud! They all warmed up to each other pretty fast. 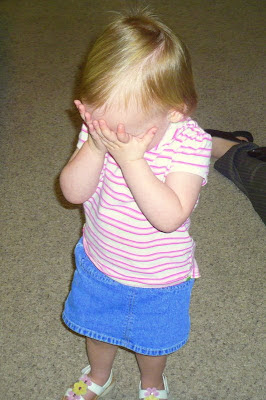 Karen, hiding behind her hands
Matthew, Rachel D. and Karen were off paling around on the staircase and they thought it would be a good idea to jump down them. Matthew took the first jump and ended up running into the living room to get some hugs and kisses from his daddy. This made the girls wonder if it was such a good idea. Karen's turn was next.

Karen jumped. She wound up in her daddy's lap, crying too.

With no one to egg her on, Rachel D. began to wonder if jumping was such a good idea afterall. She came to ask her mommy.

Yes, Rachel, please note exibit A and B, howling up a storm. It's definitely dangerous.

Matthew never really did recover from "jumping" down the stairs. They had to go home. He was up way too late the night before, playing with his aunt and uncle. Casey and Shaille arived last night from Oregon--they drove--so it was much too exciting to go to bed. Since he had stayed up so late he just couldn't compose himself.

As they were just getting ready to walk out the door, Karen came up to say goodbye to Matthew.

"Give Karen a hug," Casey and Shaille prompted.

Matthew looked around and then ran over to Dan and gave him a big hug. 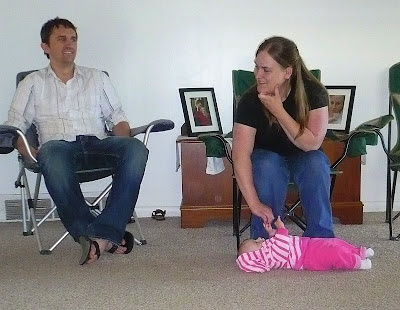 "That's not Karen!" Dan had never been mistaken for a little girl before. He was shocked.

Matthew looked around and found Matt. He gave him a big hug.

"That's not Karen, either,"

Matthew gave our Rachel a hug, and just about everyone else a hug but he just would not hug Karen. She was a little miffed and had to go sit on Joe's lap again, but she got over it pretty quickly.

"Don't worry," Joe consoled her, "One day you'll be pretty and boys won't ignore you anymore."

Rachel was excited after Matthew and Rachel D. left because that meant that Karen didn't have anyone else to play with but her. She was a little hands-on, but having been scolded for trying to poke Karen's eyes when they first arrived she was relatively gentle. She patted Karen's head a lot, but was gentle enough that Karen didn't seem to mind. 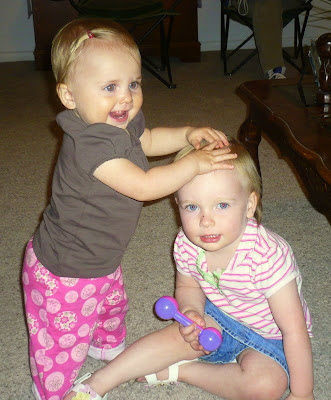 Soon, though, both Rachel and Karen started acting like it was bedtime. Rachel A. was already asleep in her carseat. Joy left and then we helped clean up a bit and left Shallee and Dan to their own devices. They don't have kids yet, so they probably had time to throw another party!

It was so much fun to get to see everyone. This will probably be the last "Circle of Joy" party that I get to go to for a long time! I hope we keep having them, though!
Posted by Nancy at 11:22 PM