"I'm not even going to set an alarm," Andrew said when we went to bed on Friday night. And for once there really was no need to. No soccer, no church, no school, no plans.

"Sounds good. But I'll probably wake you up at four o'clock in the morning to tell you I'm in labour," I joked.

With contractions now fifteen minutes apart it certainly didn't seem like real labour. What happened to longer, stronger, and closer together?

Wait? Five minutes now? Maybe I should wake up Andrew...

"I think we might need to start making some plans...now."

I held up my phone to show him my notes, which was just a list of start times for each contraction.

"That's why! They don't stay regular! How am I even supposed to know?!"

"Okay, yeah, let's call the doctor!" I said. While I did that Andrew called the Doyings, a sweet couple in our ward who I hoped were in town for the long weekend. Our neighbours across the street--who we had a standing agreement with to call first--had gone out of town for an anniversary weekend. She told Zoë to stay put until she got back but...

"Yes, I'm sure I'm in labour. No they're not regular. Between four and ten minutes apart. But it's my fourth baby, I tend to go quick, and I'm GBS positive."

We got the green light to head to the hospital and then tortuously waited for the Doyings to arrive. Andrew kept urging me to be patient. I kept reminding him that I was having contractions every four (or ten) minutes. It really didn't take them long to arrive looking just as I imagined they'd look for having been dragged out of bed early on a long weekend--an "I woke up twenty minutes ago" version of their freshest selves.

We gave them some quick instructions (mostly along the lines of "the girls know where everything is, take Benjamin potty, we left the house key right here") and drove off into the beautiful sunshine, arriving at the hospital just as shift change was happening (note to self: not great timing). We were shown into the very same room we saw on our hospital tour, was handed a gown to change into, and then were left alone for quite a long time.

"They do know I need an IV, right?" I said to Andrew at least a million times.

Eventually we were assigned a nurse and she put the fetal monitor on me for "twenty minutes" (or what turned out to be an hour and a half). She apparently wasn't allowed to start the IV until the doctor examined me and eventually the doctor (Dr. Choi) got there, too, and announced I was dilated to a seven and they could start the IV and then they wouldn't intervene to make things go faster (by breaking my water, for example) until around 1:00 (after the four hours the antibiotic needed to run its course) but that I should call for her if I felt any urges to push.

We discussed pain management. I chose nothing because I really didn't enjoy the epidural I had with Benjamin (though the spinal tap with Rachel was alright) and I was curious to see if labouring naturally was better when I wasn't strapped to a table (as I was with Miriam).

From my point of view my contractions didn't ever get closer together, though they certainly were getting longer (so long. SO. SO. SO. long) and stronger.

"This is weird," I said to Andrew. "Usually I just show up to the hospital and have my babies. Boom. Just like that. This waiting around part is...kind of boring. Entertain me!"

We watched a show and I walked around a bit. Andrew rubbed my back and...asked me why I was so tense. Because that's a fabulous question to ask your wife when she's been in labour since three in the morning. Chances are she'll answer you rather sarcastically if you ask her that.

The nurse came in and asked me how things were and if I was having any urges. I said no. She left. And then I think we called her back in with the next big contraction. I didn't feel like I had gone through transition yet but on that contraction I suddenly blurted out, "I CAN'T DO THIS!" which was the sign I needed to tell me I was going through transition (because the five-to-ten-minutes-apart contractions certainly weren't letting me know).

"That means I can!" I translated for Andrew, realizing that I'd been ignoring urges for quite a while. "I do need to push! Call the nurse!"

She called the doctor who determined that "my body was telling me the right thing," and gave me permission to push with my next contraction.

"What position do you want to be in?" she asked.

I was flat on my back at that moment, having just had a pelvic exam.

"Not flat on your back?" the doctor asked bemusedly. "What a strange request..."

She helped me get the bed into a more chair-like mode and then we waited around for the next contraction. I mentioned these were long contractions, right? Like five minutes long. Or right on top of each other with no break between. Either way.

I pushed through one contraction, or for approximately five minutes.

My water broke on the first push (as per my usual) and the doctor said, "There's the fluid!"

"No, fluid," the doctor assured me. "Your water broke. One more push. I see her head. There's lots of hair! You can push again if you'd like and...look! Here she is!"

Those five minutes of pushing were among the longest minutes of my life and I felt like I was going to be ripped in two and I may have said things like, "Why did I decide to do this?" and "MAKE. IT. COME. OUT!" but we all survived and I was assured by everyone in the room (only three people this time: Dr. Choi, nurse Debbie, and Andrew (it felt kind of lonely after the party we had for Benjamin--everyone and their intern was there)) that I had not screamed like the lady who I could now hear screaming next door.

"I screamed so much," I said, quite embarrassed, seconds after Zoë was born.

"You really didn't," Dr. Choi assured me. "This was the calmest, cleanest, quickest, and quietest birth we've had in a while."

"Here you go, Dad," she said, handing a pair of scissors out to Andrew.

To my surprise he actually reached out to grab them.

"What?" Andrew said, shaking the dazed look off his face and seeing the instrument of torture he was about to accept. "No, no, no," he said. "I don't do that kind of thing."

He does the kind of thing where he leaves the room when I get an IV, watches labour from the head of the bed, and sits on a chair making uncomfortable faces while I get stitches put in place (minor tearing on the seam of a previous pushing wound). But he also gives me thumbs up when I'm all through, so he's pretty supportive. He just hates gross stuff. 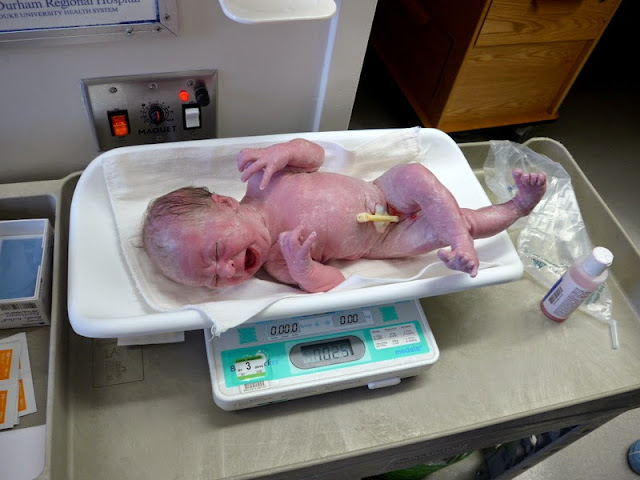 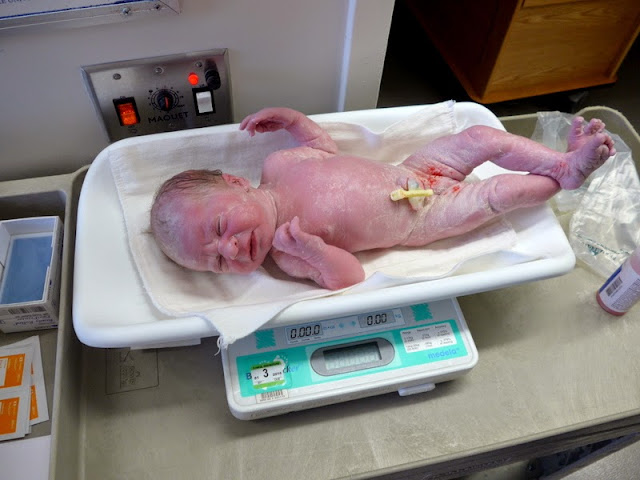 She was not very happy about being brought into the world and told everyone about it. Here she is screaming with her proud Daddy: 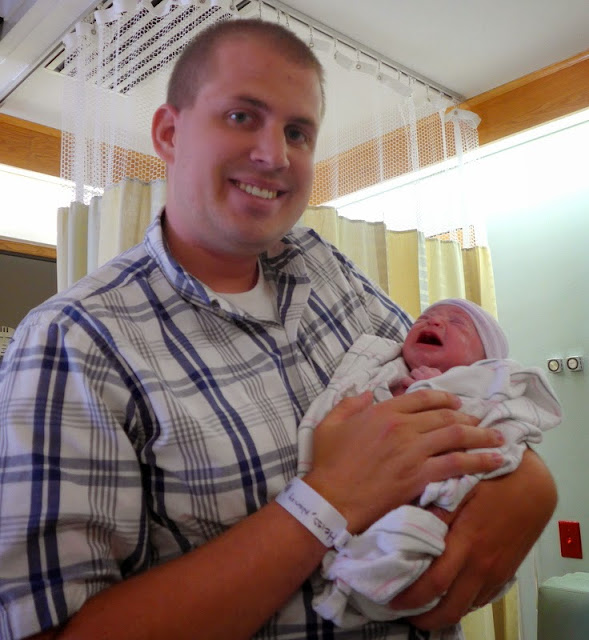 And here she is looking a little more peaceful and...less covered in vernix: 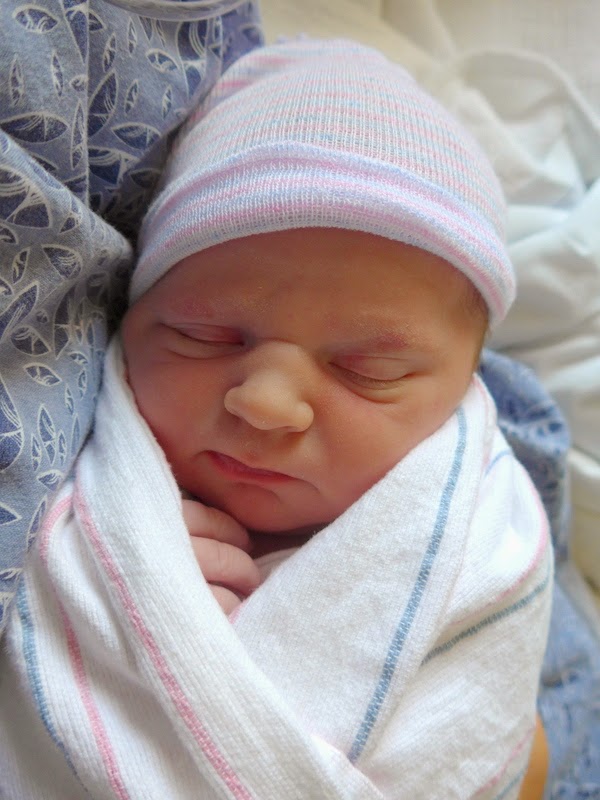 Andrew texted our sitters a picture of Zoë and they showed the picture to our kids, who I hear reacted adorably when they saw it. Then they texted back to tell Andrew that they were all locked out of the house so he rushed off to let them in and get me a milkshake.

Turns out it was his fault they got locked out. We left my keys for them and Andrew decided to take the key off my key chain so they didn't have to carry around a big gob of keys (really just one key and a carabiner and a whistle and a scripture key chain). I thought it was a silly idea because a big gob of keys is easy to know you have with you and it's easy to find in your gigantic diaper bag (not understandable to someone who keeps their keys in their pocket) and it hooks onto things. But he took the key off anyway, so when the Doyings left the house, Miriam grabbed my gob of key chains (now without a key) and said, "I've got Mom's keys!" and the Doyings locked the handle and closed the door behind them...but they had no key.

But I got a milkshake out of the deal, so I guess it's okay that Andrew left me all on my own so soon after having a baby.
Posted by Nancy at 11:51 PM