It's been one week since you looked at me...

I tried to get breakfast before Zoë woke up this morning but I had hardly managed to walk out of the bedroom when she started to fuss. So I sat down and made Andrew bring her to me. 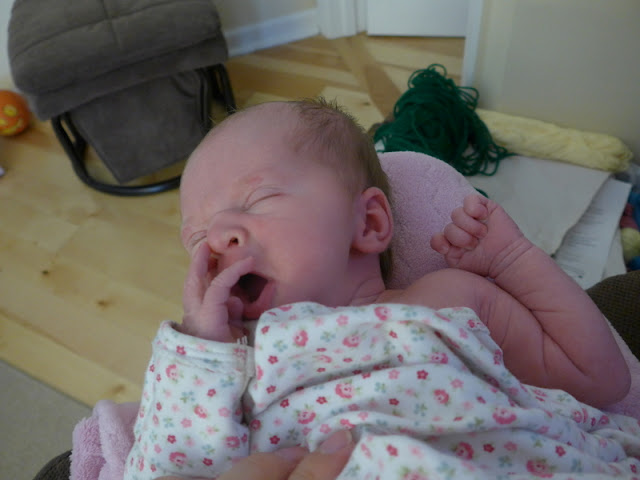 And, indeed, she was halfway out of her pyjamas when he brought her to me. I lifted up her nightie to check her diaper and behold—her umbilical cord had fallen off (and had managed to stick itself to her tummy (I had to peel it off))! 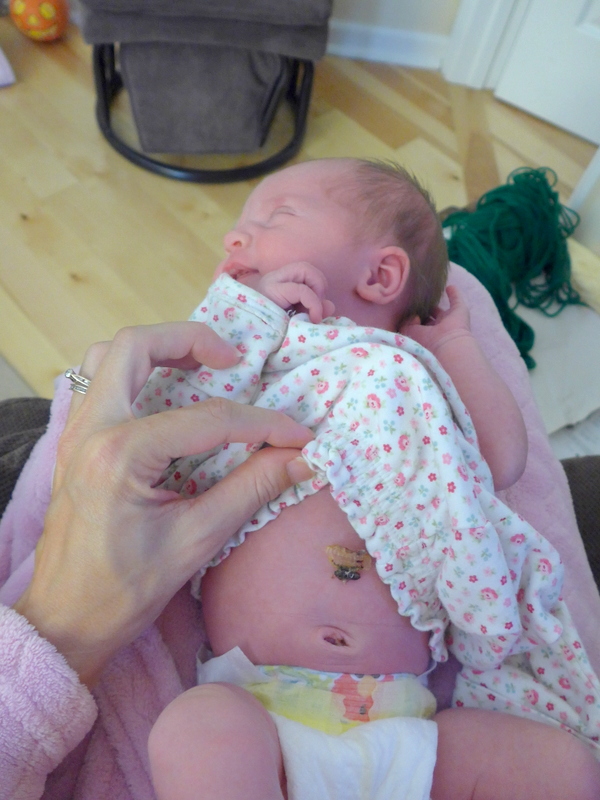 Andrew just about did a happy dance. He hated that cord stub. All the kids did, too. They used to beg me to get her dressed so that they didn't have to see it or risk touching it accidentally. Today they asked if she could stay naked so they could feel her soft skin. Silly kids.

Benjamin was the last to find out. "What? Why her no bili-co-cord?" he wanted to know.

He was Daddy's shopping buddy this morning so it was just the girls at home. We celebrated Zoë's first week of life by pointedly doing tummy time on the floor—her first time! She's done tummy time on me but I just never thought to put her on the floor until now (perhaps because today was the first day Benjamin was out of the house during her awake time (having her on the floor when he's bouncing around really stresses me out)). 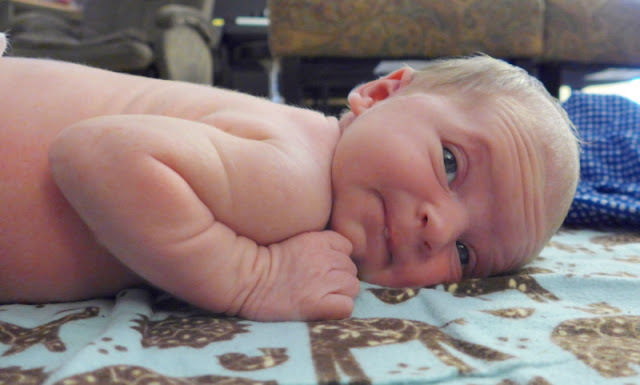 She took it like a champ; no crying or anything.

While Zoë did her best to fight against gravity, Rachel practiced braiding Miriam's hair (and Miriam patiently sat there, talking to Zoë, while Rachel braided her ponytail over and over again). 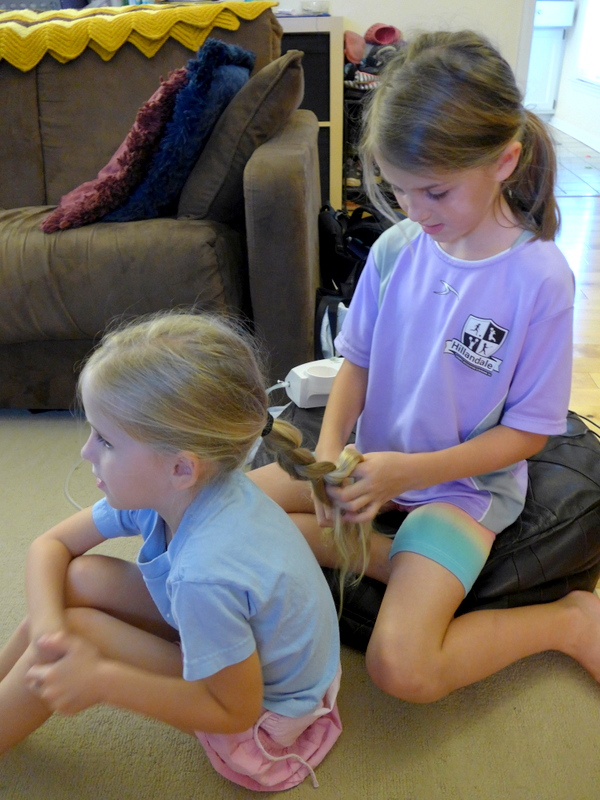 She was getting pretty good at it by the time Miriam got sick of sitting there and told her enough already! 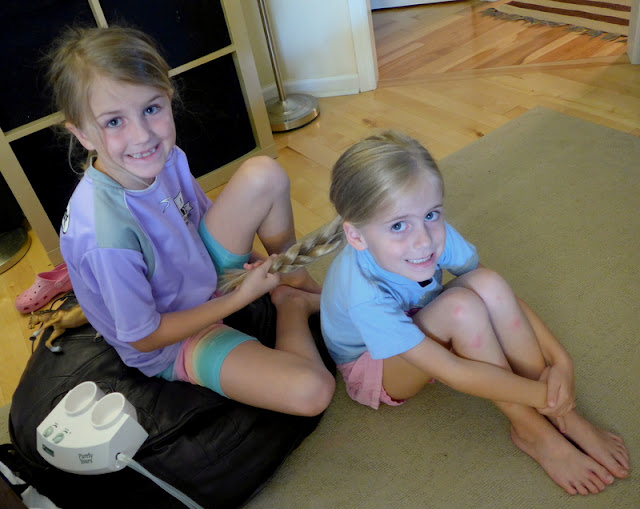 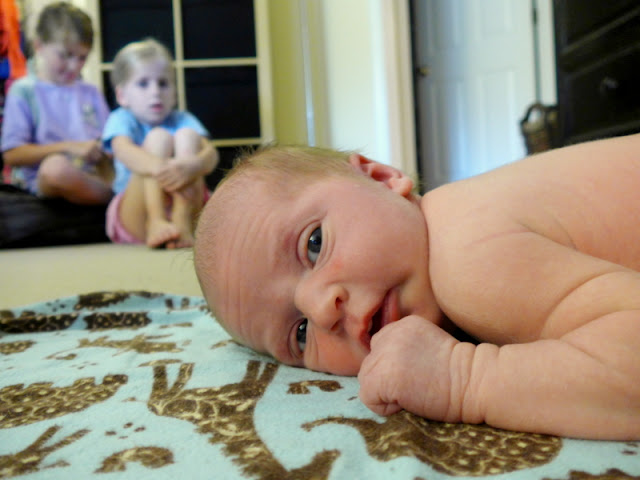 And then she very nearly rolled over! She pushed herself onto her side and would have flipped over except her other arm was in the way. I will never be one of those moms who can just leave her baby on a high surface and feel carefree about it. My kids always seem to roll early. 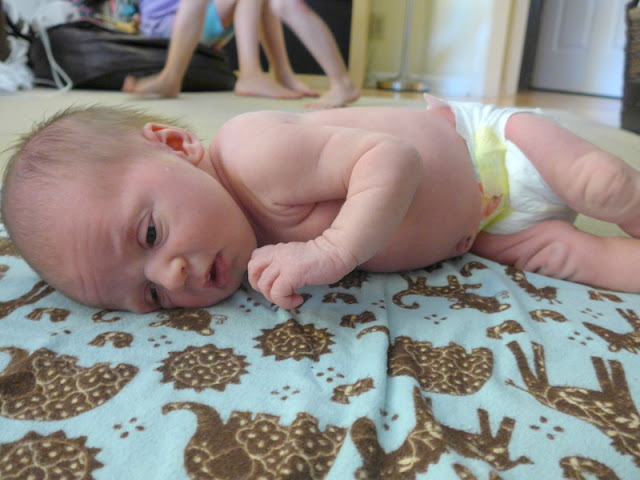 Rachel and Miriam were both rolling over consistently (back to front and front to back) by the time they were three months old (Miriam held off on crawling until she was eight months old; Rachel started crawling by five months, was cruising furniture by seven months, and running by ten months). Benjamin began flipping off his tummy and onto his back before he even hit his due date (shortly after we came home from the hospital, so around five weeks old). We credit that, in part, to his big head—it would pull him right over—but he never stopped rolling like my cousin's baby did when he "grew into his head," so to speak (I suppose Benjamin still hasn't quite grown into his head, so that's probably why he retained his rolling over skills). 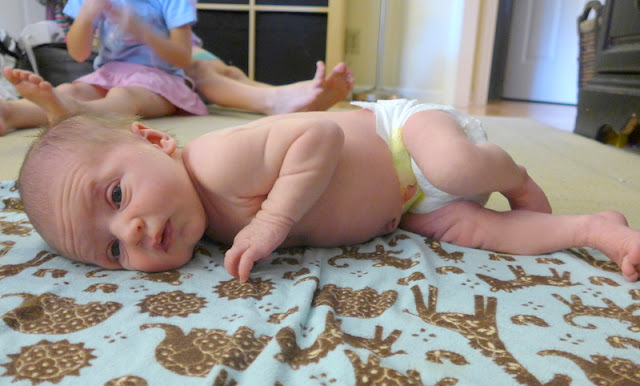 I remember we once invited some friends over for dinner when Rachel was just over a year old. They brought their five-month-old with them and she left the baby on the couch while we had dinner. I was flabbergasted.

"Are you sure she's going to be okay there?" I asked.

"She's not going to roll off the couch, is she?" I asked.

My brain just about exploded because my baby had been crawling around the living room at five months—pulling ornaments off the Christmas tree and mucking with all sorts of stuff. I couldn't fathom leaving a five-month-old on a couch!

If my children ever wonder why I'm slightly crazy, let it be know it's because some of them gained mobility a little too early (Rachel I'm looking at you (but really the rolling thing was everyone—just stay where I put you, babies!)). 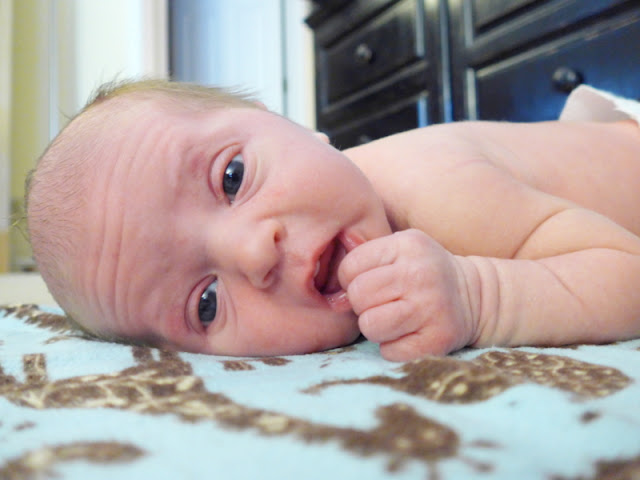 When Benjamin came home from the store he wanted to hold his baby Zoë. I asked him to smile, so he did, and then he checked to see if Zoë was smiling. She wasn't. 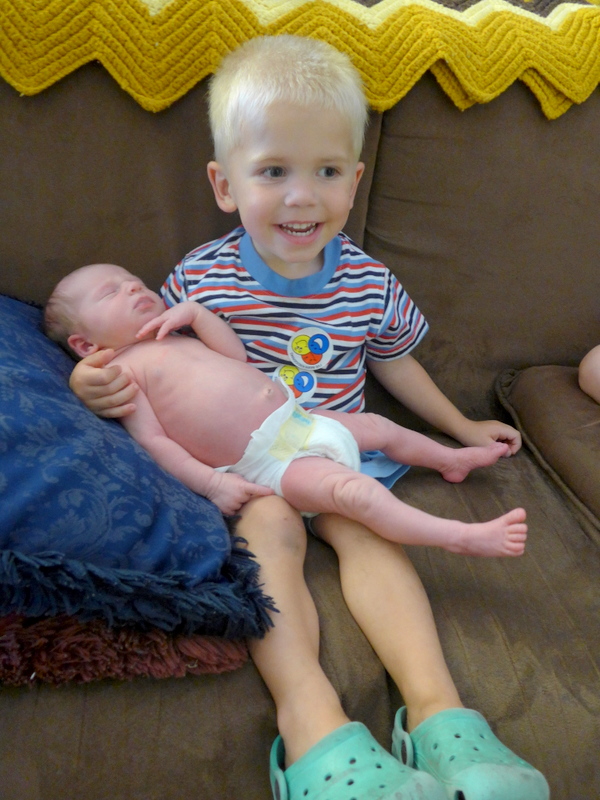 He was rather perplexed by her obstinate behaviour. 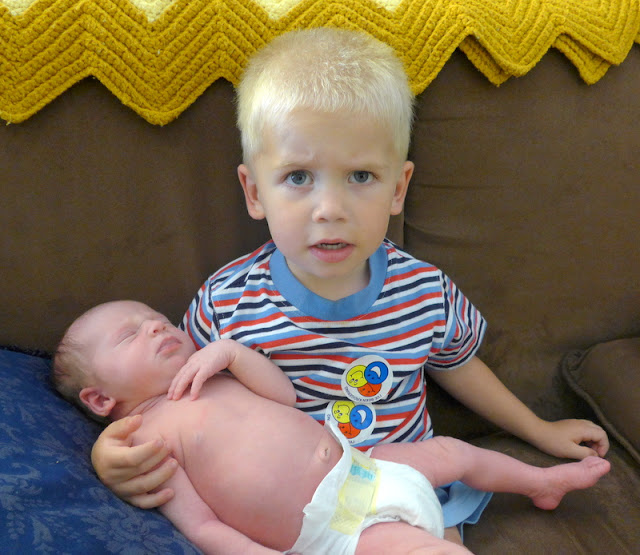 Miriam, meanwhile, was perplexed by her bug bites. Mosquitoes love this girl and last night she went out firefly hunting without putting bug spray on (big mistake). 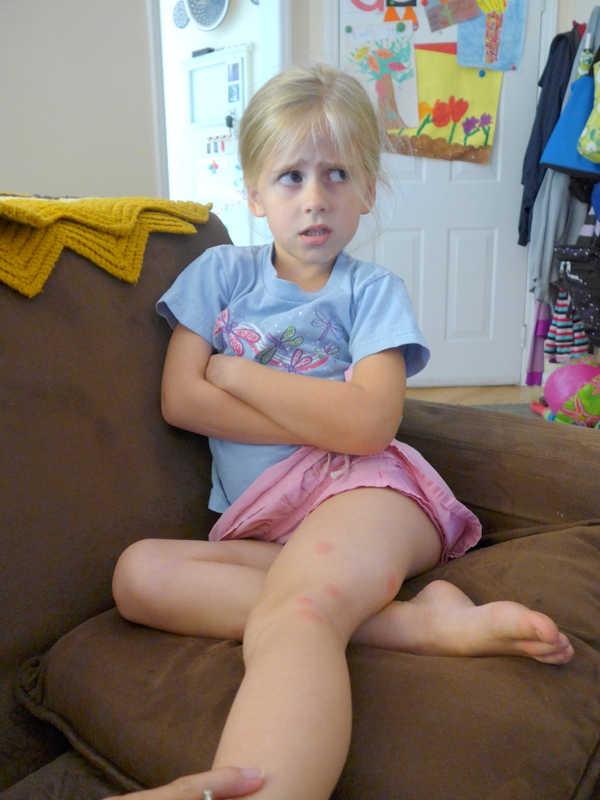 Having a turn holding Zoë cheered her up quite a bit though. 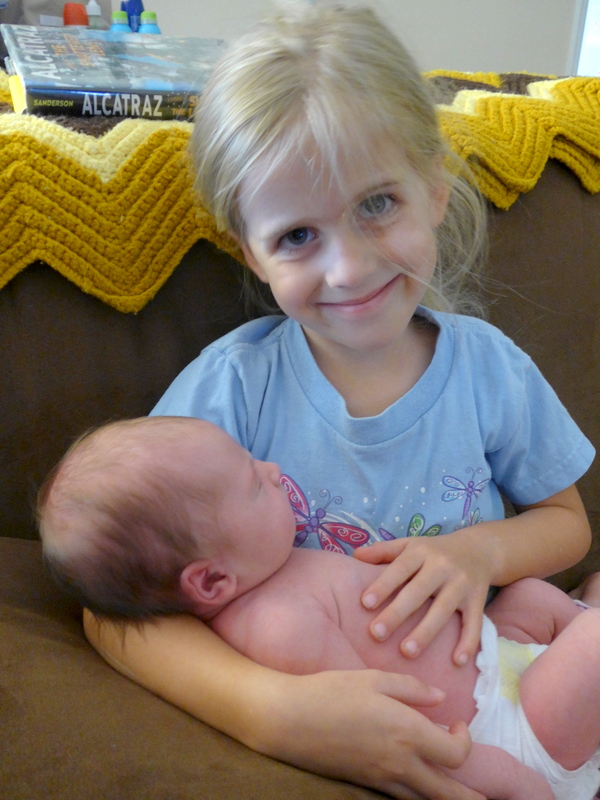 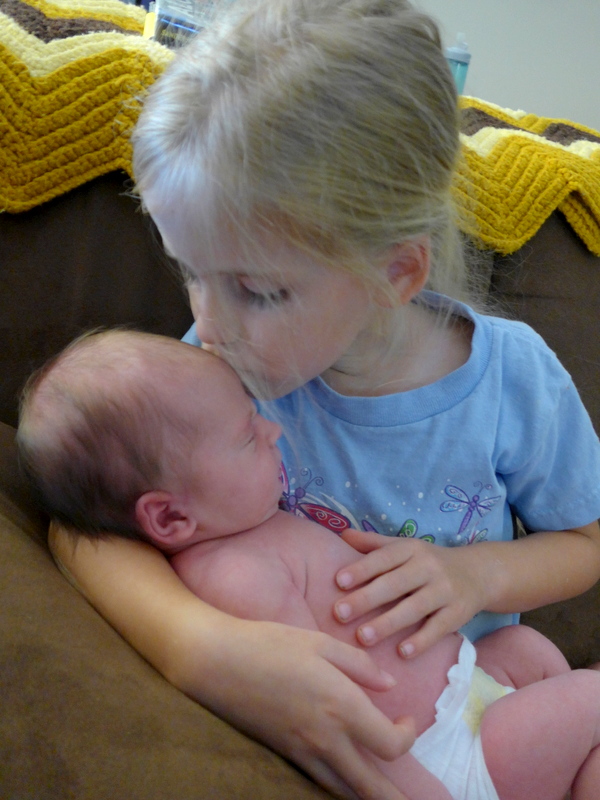 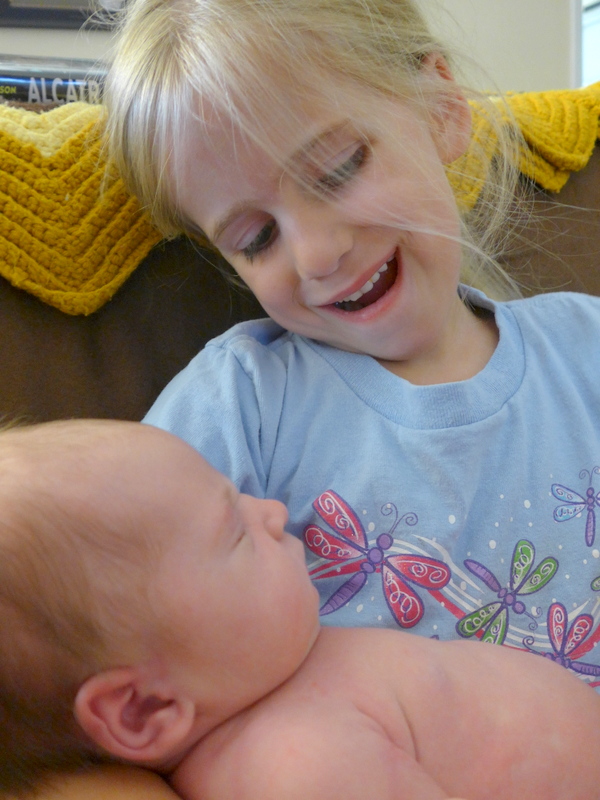 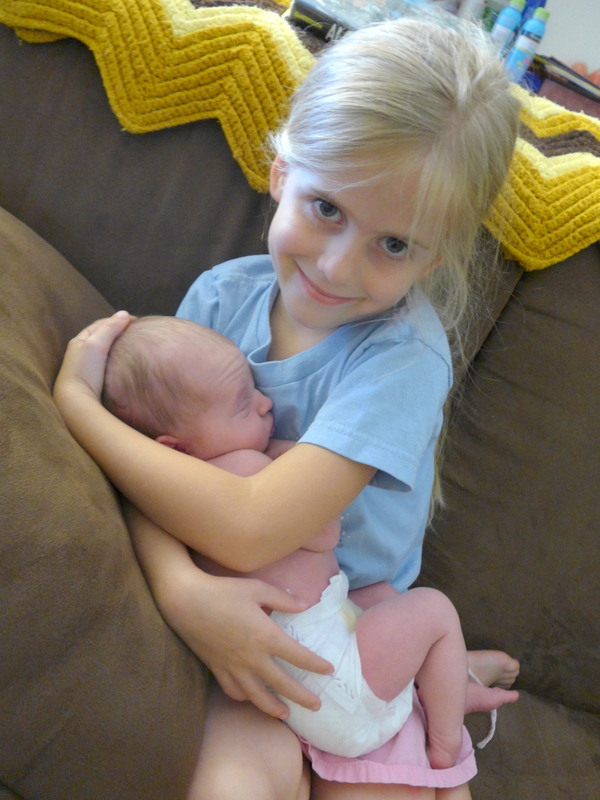 Rachel took a turn holding Zoë as well but I didn't take any pictures because she's capable enough that I can do stuff while she holds Zoë so I don't hover around her with the camera like I do with the other kids. I'll have to remedy my lack of photos later.

Here's the outfit Benjamin picked out for Zoë to wear on her one-week birthday—he insisted on the hat so she took a nap with it on before we ditched it (it's hot out!): 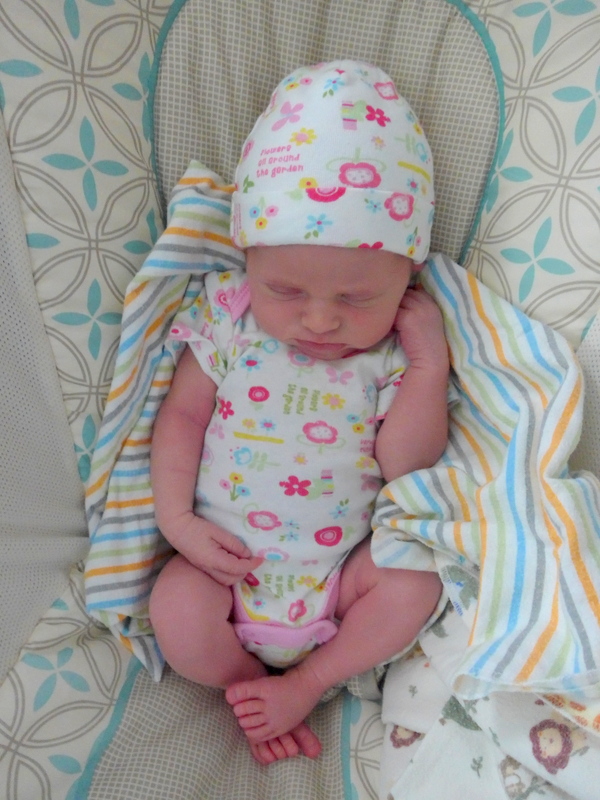 Perhaps the most exciting part of Zoë's one-week birthday was that Uncle David arrived today! 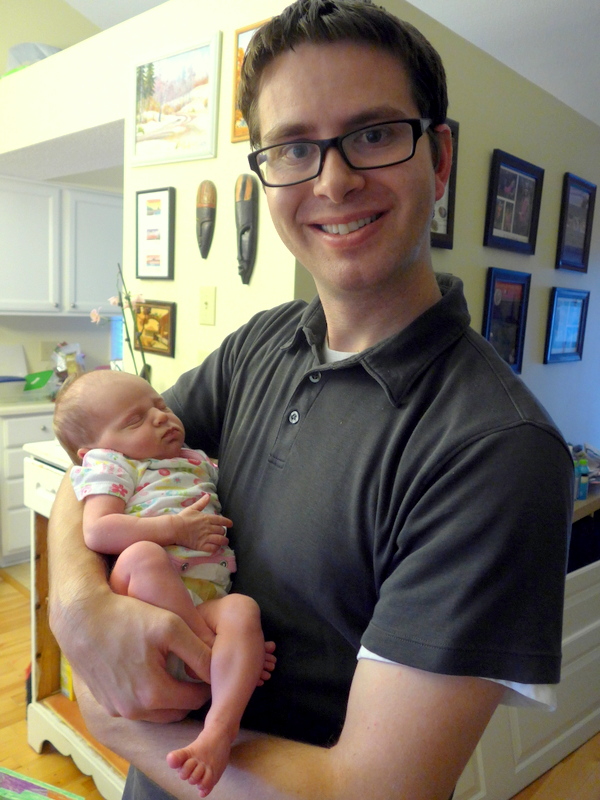 The kids were all so excited for him to get here. They spent the afternoon making welcome cards and posters and singing and talking about him nonstop. Andrew took the three older kids to the airport to pick him up while Zoë and I stayed home to nap.

So far Uncle David has not been a disappointment. The kids took him outside to draw with sidewalk chalk and he took the kids firefly hunting and then went on a family walk with all us. Instead of walking up and down our street, which is what we've done every night since Zoë and I came home from the hospital, we went on a longer "to the speed bump" walk and I'm definitely feeling the burn.

The first half of the walk went okay but I started lagging behind on the way home. Perhaps by Zoë's second week birthday that walk won't seem so hard anymore...