Today was a crazy running-around-nonstop kind of day. Andrew asked me to cut his hair just before I had to leave for the doctor. I was like, "Really? Now?" He volunteered to start it himself (and did start it himself) as a commitment device. So I finished it for him. Then he decided to convince Benjamin to get his hair cut as well.

"No, sanks," Benjamin replied calmly. "I don't like haircuts. Them is scary. I will cry."

When I came home from the doctor Benjamin had a freshly buzzed head so Andrew was successful in luring him over to the clippers eventually.

Andrew left for work as soon as I got home and Benjamin and I left to pick Miriam up from preschool soon after that. We came home for lunch, we made an attempt to clean up the house a bit, I rode the exercise bike and washed a nearly-brand-new garbage can we're donating to a family at Rachel's school (an apartment complex nearby burned down a week or so ago and we're trying to refurnish apartments for a few families at our school who lived in the complex and lost everything), and then we gathered up materials to decorate doors at the school and headed on our way.

Here's what we did for Rachel's teacher (one of her favourite colours is pink): 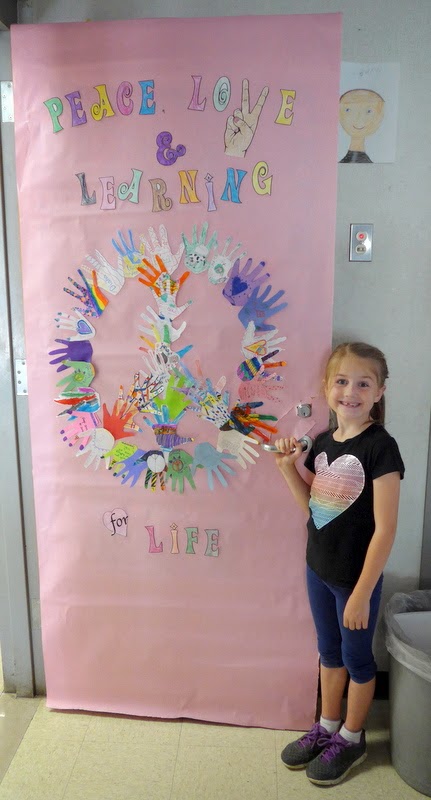 Peace, Love, and Learning is her classroom motto. I asked the kids to send in handprints with thank you notes on them and we turned them into a big peace sign. Rachel was a big help putting everything together; Miriam was a big help making little rolls of masking tape for us to use (and she helped colour the letters earlier in the week); Benjamin ate fruit snacks and did his best not to be too pesky.

There's a new girl in the class that Rachel has been complaining about. She's a year older than everyone else, she isn't kind to anyone, she misbehaves, blah, blah, blah.

On the way to church this past Sunday I told Rachel a story of when I moved to Utah. My brothers and dad drove down a little while earlier and got things settled in the new house. My mom, sister and I stayed up in Alberta a while longer so I could go to Young Women's Camp and help wash walls and things like that. My grandma helped drive us down when it was time to move. We arrived, I believe, on mutual night (the activity night for the youth at church) and it was a dance in the parking lot. I showered, ate dinner, and walked to the church, which was four houses up the street from us.

And then I awkwardly stood around being shy and not talking to anybody.

Soon, though, I fell in with some wonderful friends—Annik and Shallee. Later, after we'd been friends for a while, Annik confessed something to me. She said she went home after mutual that night and said to her mom, "Ugh—there's this new girl who just moved into the ward and she is such a snob! She didn't talk to anyone the whole night and just stood there like she was too good for everybody. She is so stuck up."

And her mother said, "Did you talk to her?"

"Didn't she just move from Canada?" her mom asked.

"So, this girl arrived today from another country and stood alone at mutual and she's the snob? I think you have this backwards. You need to talk to her."

Annik did. And the rest is history. The moral of the story is that sometimes it's easier for those well-established in an environment to reach out to a new person than it is the other way around, and sometimes being new can make people seem a little prickly but they're probably really nice once you get to know them.

But then I found this girl's handprint in the stack and giggled. Perhaps she'll be a harder egg to crack than I was—though I still believe (part of) what she needs is a chance and some friendship. You see, the thumb and three fingers of her handprint had been folded down leaving just one special finger sticking straight up.

I smiled and shook my head as I uncurled those rogue fingers and taped all five of them flat against the door. 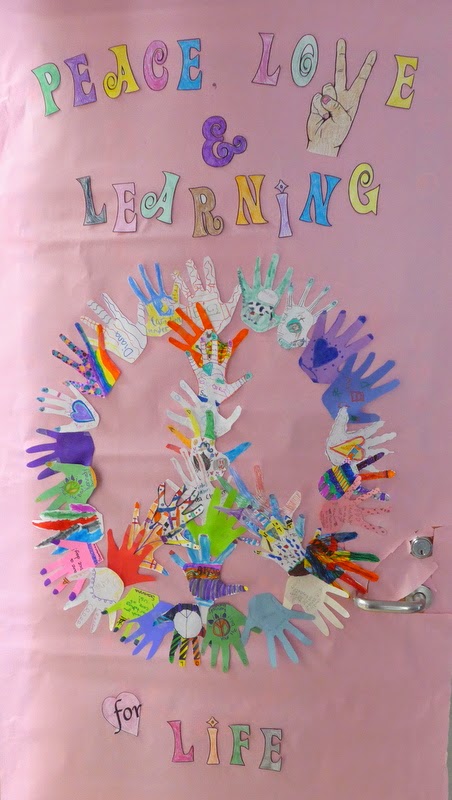 And then we moved on to the PE teacher. I think I like this door better, although the other door has a personal touch that this door lacks. We went for a LEGO theme.

"I have no idea," I said. "I've never met her. I just signed up to decorate her door because no one else had." 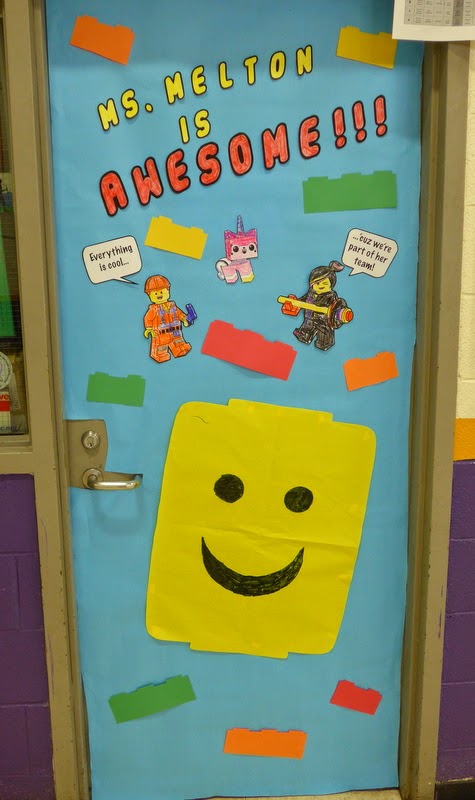 That could totally be a reference to sports, right? Of course right.

I cut out the little LEGO bricks shortly before we left the house because I was afraid it would be too plain without them and we made the big LEGO head there. Rachel traced my water bottle to make the eyes and we drew the mouth freehand. Then Rachel got a black felt marker from her classroom and she coloured the mouth and let Miriam colour the eyes. Benjamin also left his mark, which the girls found distressing, but which I didn't care about because we'd already spent a healthy amount of time decorating doors after school and had to get out of there! 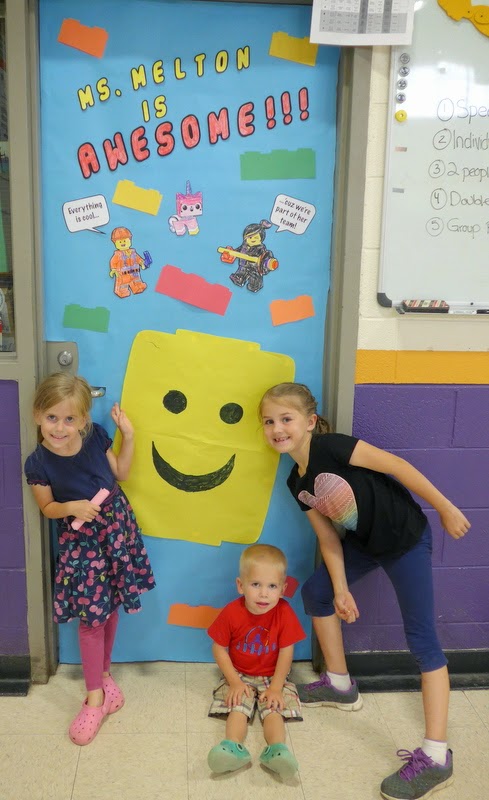 This door was actually easier than Rachel's homeroom teacher's door because I told Benjamin to pick a line on the gym floor and follow it around. That kept him occupied for quite some time.

We didn't finish at the school until 5:10! We rushed home to make sandwiches for dinner and I was crossing my fingers the whole time that Andrew would be there already to get things started but he still wasn't home either! The girls rushed to get into their soccer things while I pulled the makings for sandwiches from the fridge and cut some cheese. Daddy came home while we were throwing sandwiches together and quickly put one together for himself and somehow we managed to leave the house almost on time.

Andrew and Rachel were on time for soccer but Miriam was a few minutes late since her field is about fifteen minutes away from their field. Benjamin was fast asleep by the time we arrived (he was the first one up this morning so that didn't really come as a surprise) so Miriam grabbed her stuff and ran to her field while I unbuckled Benjamin and—for the first time in five or six months—lifted him into my arms and carried him down to her field.

I figure that since I've been given permission to go into labour the thou-shalt-not-lift-nor-carry-thine-tot commandment has been lifted as well.

Miraculously he stayed asleep while I explained to Miriam's coach that I had a meeting to go to but that her friend's dad would be taking her home. I introduced the coach to Justus and they said they'd take care of everything (Miriam's friend Marcella has soccer the same time on the adjacent field) and then I walked up to Marian's van with her so we could rearrange car seats before leaving for Relief Society.

Once we had all the carseats into Marian and Justus's van, Marian and I left for Relief Society meeting, which was wonderful. A counselor in the temple presidency was there with his wife and they spoke to us about how to make the temple an anchor in our lives. And then there was cheesecake.

I didn't have any for obvious reasons and Marian didn't either because although she's not dieting, per se, she's been trying to "behave herself" since getting back from a trip she and Justus took to Italy (where she gorged herself full of gelato everyday because why wouldn't you?). We sat and talked about childbirth instead because we're young mothers and sometimes that's what young mothers do. She had her last baby at the hospital I'm planning on delivering at, so it was nice to hear her experience.

Then I picked Benjamin up from the nursery (because he came with me, I think I forgot to say) and he showed me the origami throwing star he had and informed me that, "Avery's dad is very good at making these stars!"

And then I sat down and wrote this and I am still kind of feeling like today was one big blur.
Posted by Nancy at 10:08 PM