It's hard to believe we've been home for four days already and that tomorrow Zoë will be a week old! We actually went in for her one-week check up today and she's already back up to her birth weight so—hallelujah!—we don't have to go back in until her one-month check up.

Zoë had to go in for a check up the day after we got home and at the end of the appointment the NP who saw us said, "Ordinarily I'd have you come in for another weight check tomorrow but since you have so much experience with breastfeeding I guess we can wait until your one-week appointment, which you can make for this Friday."

Support, in my mind would be a home-visit from a nurse. Dragging mothers and babies out of their house to sit in a germ-infested waiting room so many times in the first week of a baby's life seems...cruel. But maybe that's just me.

When she was weighed before we left the hospital she was 6 lbs. 11 oz.

Now she's back to 7 lbs. 2 oz. and she's going to get rather chubby until around 4 months old when her growth will start to slow down and then doctors will start to get on our case about keeping her weight up. But that's just how my kids have all grown.

Anyway...we came home from the hospital four days ago and this is what Zoë looked like (we've since found the head support that goes with the carseat): 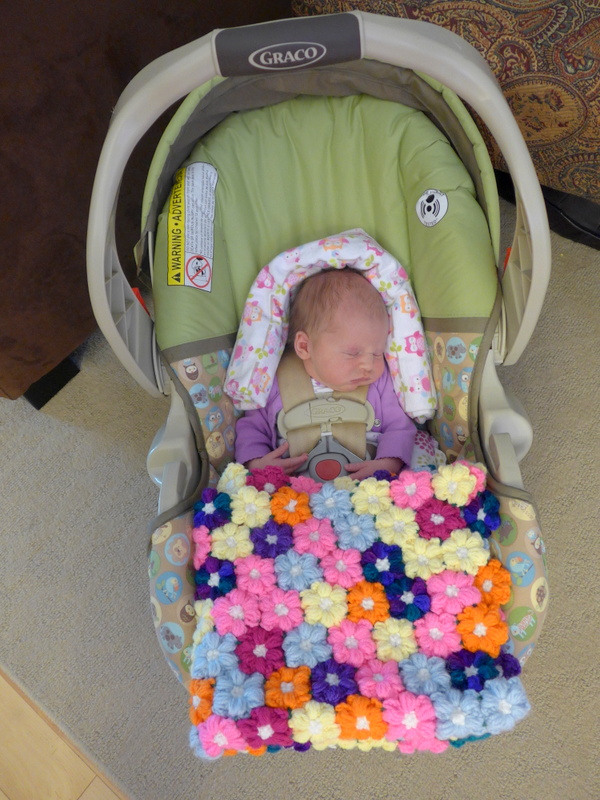 The kids were all very excited to get to hold their sister and they haven't stopped begging to hold her since. 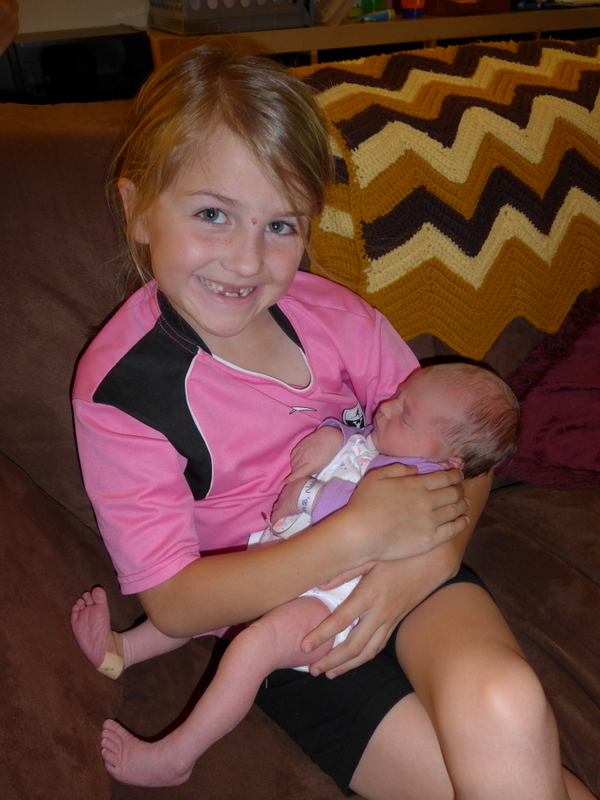 And here's Miriam with Zoë: 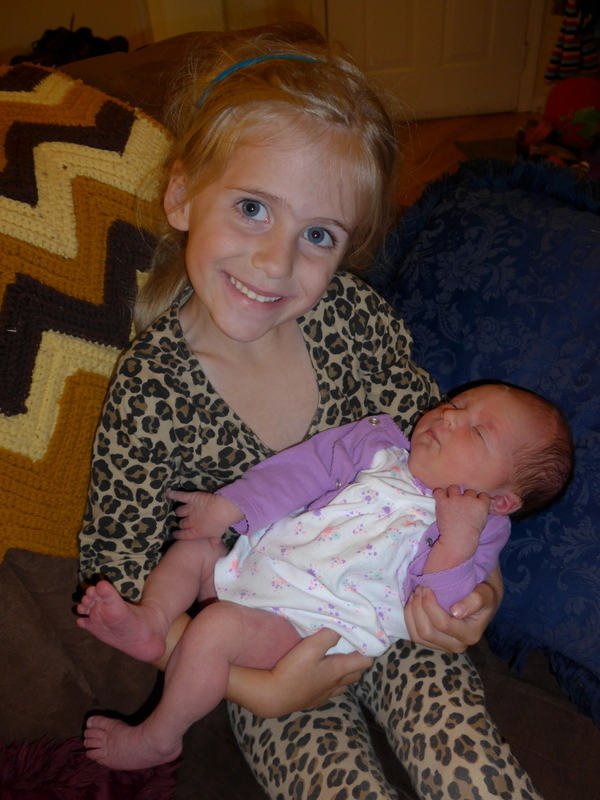 And here's Benjamin with Zoë (he gets two pictures because the kissing picture was just too sweet): 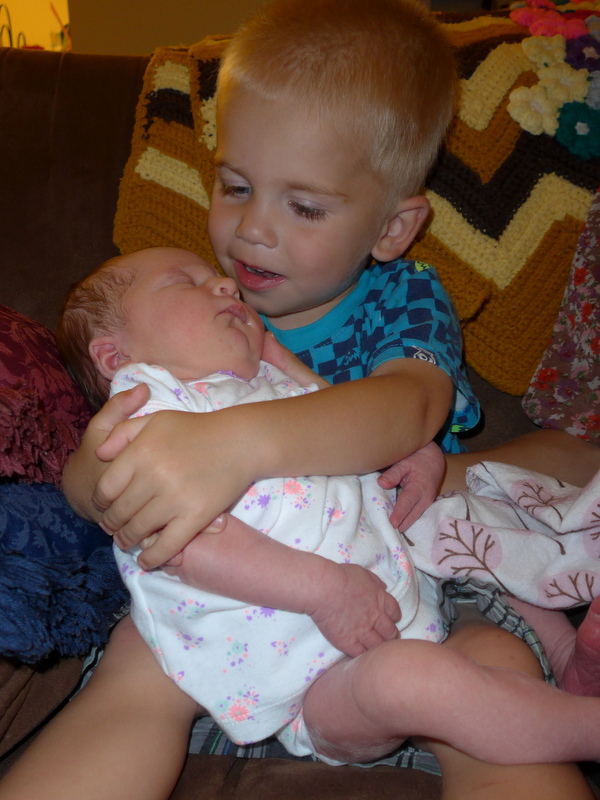 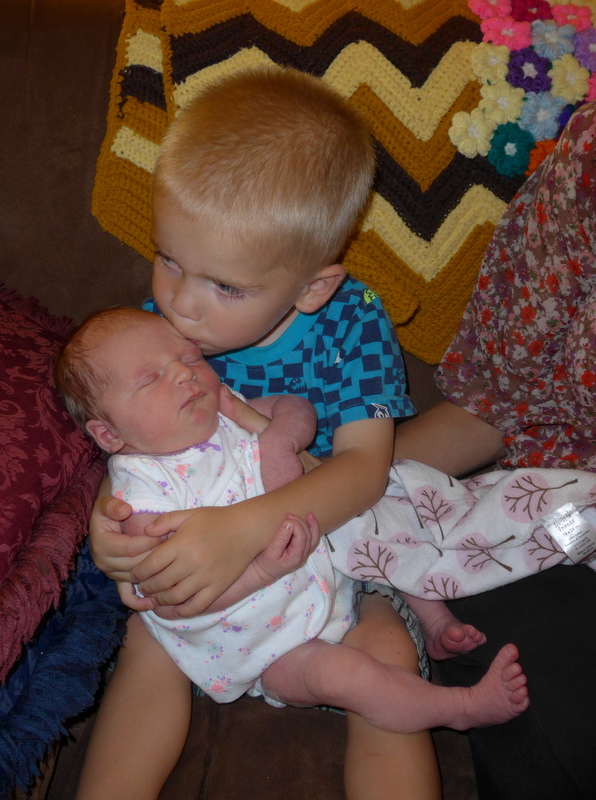 He can't walk past his sister without crooning at her. He'll walk into the living room talking to me about something, "Mom! I can't find my..." and then he'll see Zoë and say, "Awwwwww! She's a cute baby!" and completely forget what he was talking about in the first place.

He's always kissing her and loves to help get diapers and wipes. Right now we have diapers with Sesame Street characters on them. When I was a first-time mom I wondered why such a thing was important—I mean, the baby doesn't care what pattern is on their diaper—but now that I've had toddlers and babies at the same time I know exactly why they put beloved characters and cute pictures on them.

The lottery of which-monster-will-I-get is the highlight of Benjamin's life lately. Every time he hears the tell-tale sounds of a poopy diaper he rushes to ask if he can do the honors of getting a new diaper.

Elmo is his favourite monster in the world, or, as Benjamin says, "Elmy is mine savit monkey inna wold!"

The other day he was quite upset that she dare desecrate an Elmo diaper and declared he'd find a new one to put her in. I was a little nervous about this because he was choosing from a whole row of diapers, but somehow he managed to find one. He just plunged his hand in the package, right in the middle, and somehow came up with Elmo. "I did find Elmy!" he said. "You said I wouldn't but I did!"

So, there's Elmo and Big Bird and Cookie Monster and also just a heart that says "Pampers." Benjamin thinks those diapers are the biggest joke—some kind of manufacturing defect or something.

"What? No monkey?!" he'll say and put the lame diaper back so he can pull one out with a monster on it.

He'll be disappointed when we switch to cloth. The doctor said Zoë's umbilical cord should fall off in the next couple of days and I'm starting to feel like maybe laundry is a possible task to accomplish again so that will probably be soon. And then there will be no more Sesame Street monsters. But we have some pretty cute newborn diaper covers so I suppose he'll learn to be happy with those.

I keep getting so far away from Zoë's homecoming, don't I?

One of the first things we did was take her outside so we could take some nice pictures of her. The kids were being a little wild so Andrew told them to go play elsewhere while we just took a few pictures of the baby in peace.

The girls decided to climb the tree in the front yard, which they do a lot, but within about two minutes Rachel fell out of the tree (she's fine), Benjamin tripped in the driveway and scraped his knee, Zoë decided she'd had enough of whatever we were doing to her, and Miriam got stuck in the tree. 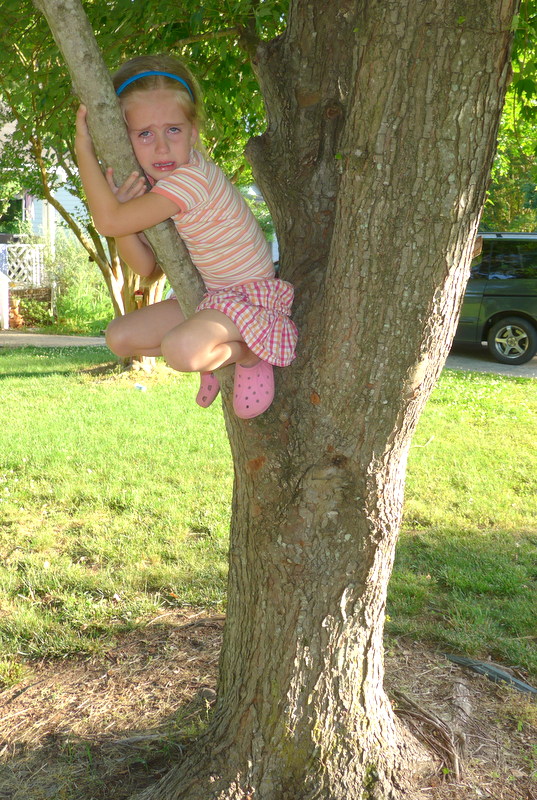 All four kids were screaming and crying and carrying on and I'm sure our neighbours shook their heads over all our craziness...because four kids. What were we thinking? I don't rightly know.
Posted by Nancy at 7:18 PM