Last night I went to bed and...didn't wake up again until 6:00 in the morning. And then I went back to bed until around 8:30. And then the kids let me take a nap in the afternoon. And it was glorious because the night before last I kept being woken up by contractions every 20 to 30 minutes—not enough to make me think I was in labour but just enough to make it impossible to really fall asleep (and nothing would stop them; it was infuriating). I was exhausted all day yesterday and when I tried to take a nap it was a big fail (the kids wouldn't even sit quietly to watch a show). But today I felt like a new person. It was great!

Fortunately, Miriam had a field trip to the farm yesterday and they were rather late getting back so I only had Benjamin home, which meant he had no one to fight with. We made banana muffins together with the cool morning air blowing through the windows. When we were finished baking the house was only 74°F! Our A/C is set to 78°F so this was kind of a huge deal—baking...in May...without the air conditioner working its hardest? Amazing. We've been having gloriously cool mornings and evenings.


Our friend Diego, who's been fighting childhood cancer (Wilms' tumor), was planning on running an "Alex's Lemonade Stand" booth at the Spring Fling today and needed donations of baked goods for to "sell." Technically everything was free...for a donation (they ended up raising $237.97). His mom asked that everything be individually wrapped so I packaged them like this (and thought they turned out rather cute-ish): 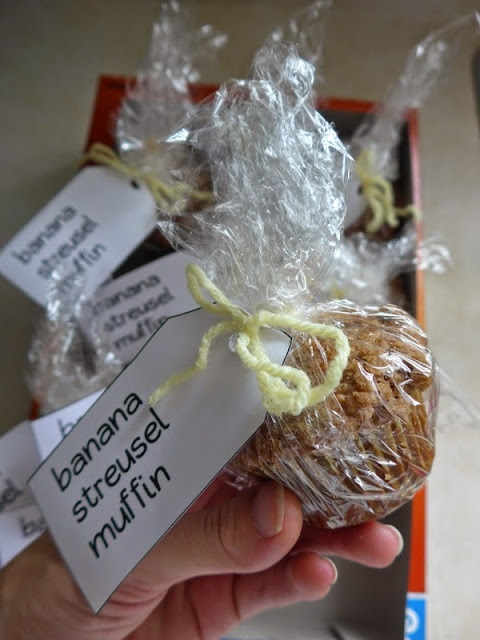 Andrew got home, picked one up, grimaced, and said, "Are these for the bake sale?"

"A little weird," he scoffed. "Who's going to bid on them? Like, what are they going to do? Plop ten cents down and take one?"

"That's the general idea..." I said, a little offended that he hadn't been impressed by my stellar packaging job.

"Oh, really?" he said. "I thought it was a silent auction thing."

"No, no," I said. "These are for the lemonade stand. That plate is for the auction."

I pointed to a larger plate full of muffins.

We still had a few muffins left over for the kids to eat after dinner last night and they gobbled them down, so I guess they were good. I didn't eat one so I wouldn't know (eighteen days—but who's counting?).

This afternoon when Rachel got home from school we went to the library where we ran into a couple families from church, which was fun. We rushed home to get ready for the spring fling, which involved packing a picnic dinner.

This is how Benjamin helped (which was really quite helpful): 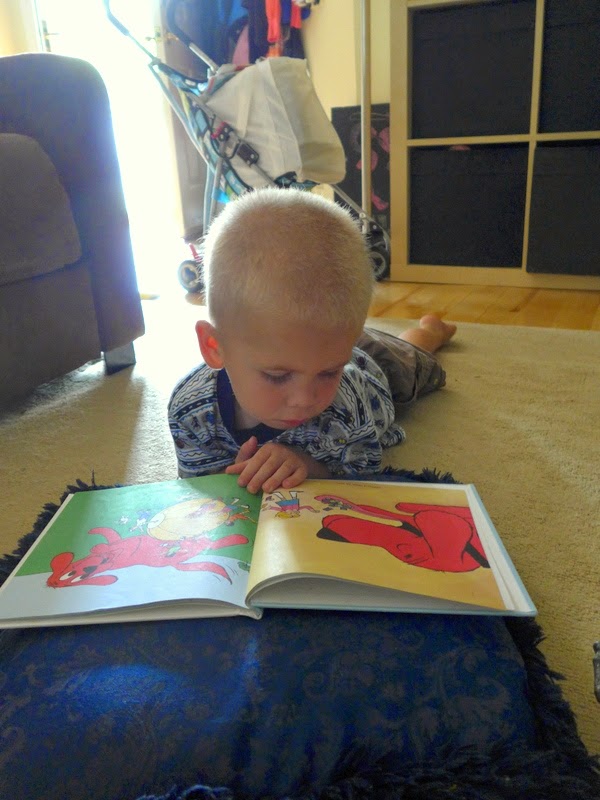 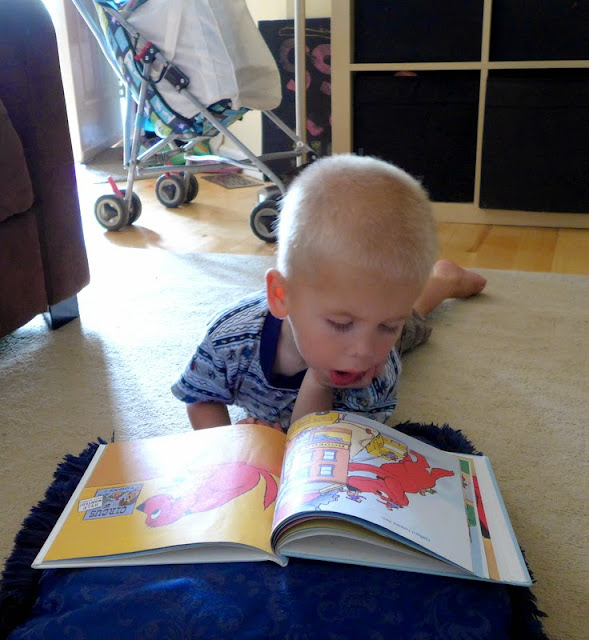 The girls made sandwiches for themselves and Rachel peeled a cucumber, which I cut up, apparently so that Miriam could do this: 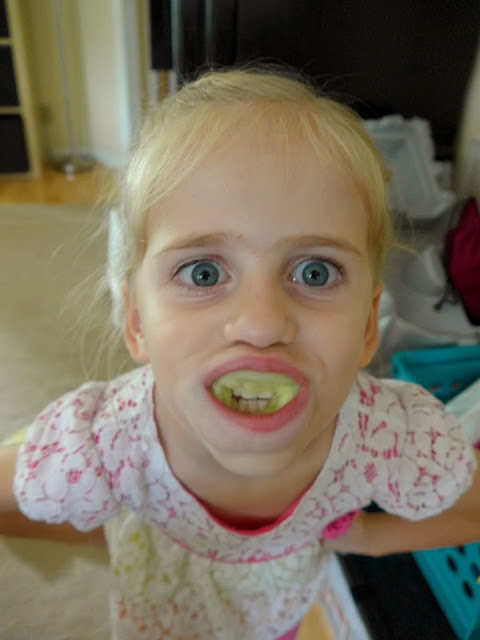 When Andrew got home we loaded into the car and headed off to the spring fling, which was just an informal gathering of sorts at Rachel's school. There were a couple of booths set up (pizza, Pelican's SnoBalls, a scout troop, and Alex's Lemonade Stand) and a few games the PTA had planned (which my children shunned in favour of the playground), and families picnicking all over the field.

We hardly saw Rachel and Miriam; they were running around with friends. But I did get a picture of Miriam's hair before she took off: 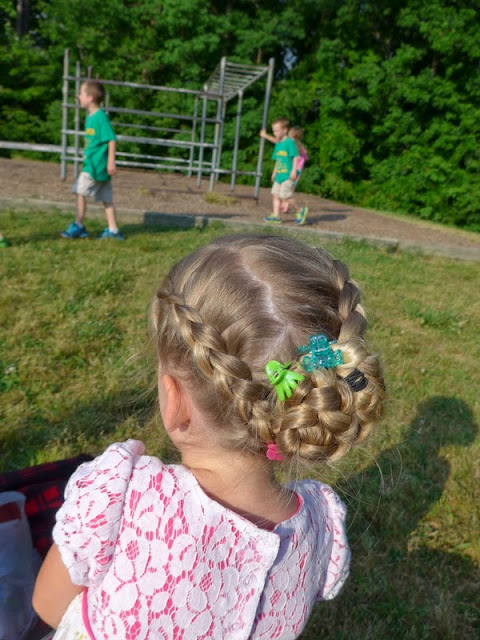 And here's Rachel running back to us to get a drink or something before taking off again: 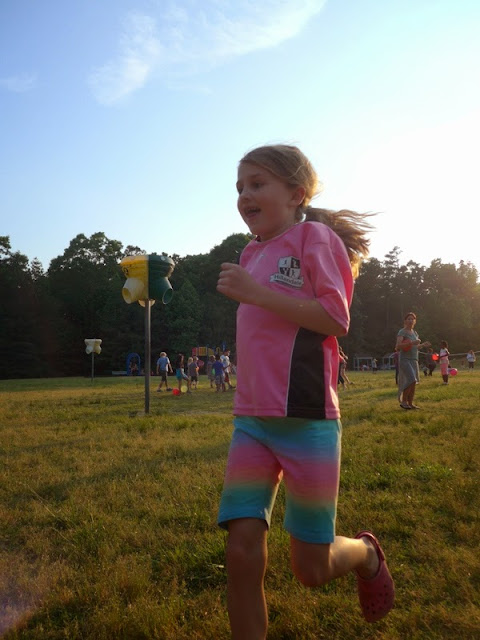 Benjamin mostly hung out around us. He tried to play amoeba tag with the big kids, which was hilarious. He stood around listening to the rules but when the kids scattered and started running around he turned on his heels and booked it back to us. The look on his face was one of sheer terror. I'm sure he thought he was going to be trampled to death (and, truthfully, I was a little worried about that myself). He was much happier when they brought out balloons for that game where you tie one to your leg and try to keep yours whole while popping other people's. He didn't play the game—he just grabbed a balloon and loved it...to death. 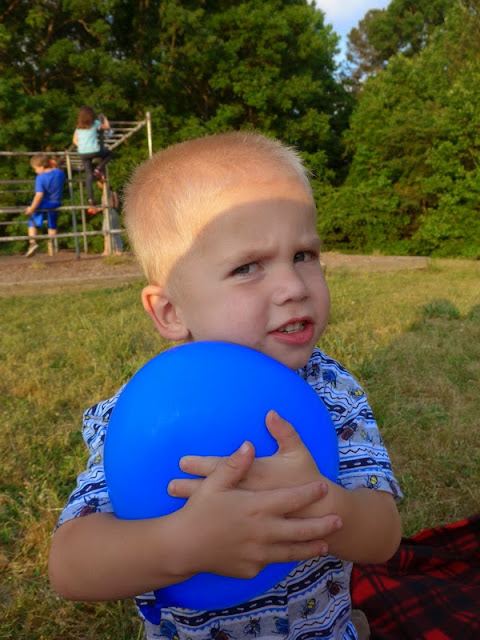 When it popped he asked me to fix it, which I said was impossible, so he asked Daddy to fix it and Daddy said he'd try and took a piece of the broken balloon and blew it up: 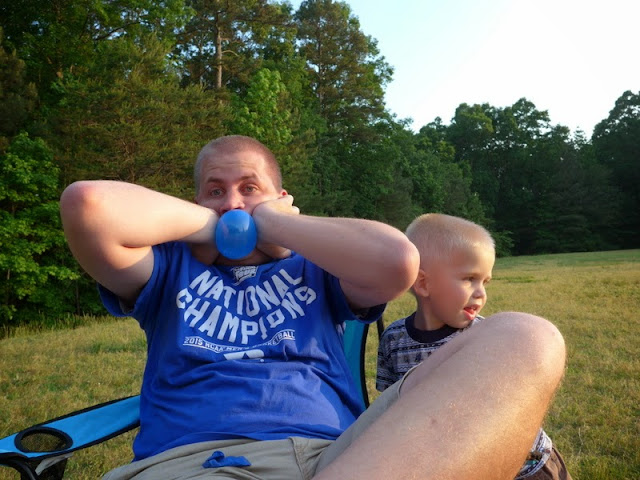 But he ultimately the task was impossible so Benjamin stole Baby Jay's balloon (and Baby Jay was fine with that). 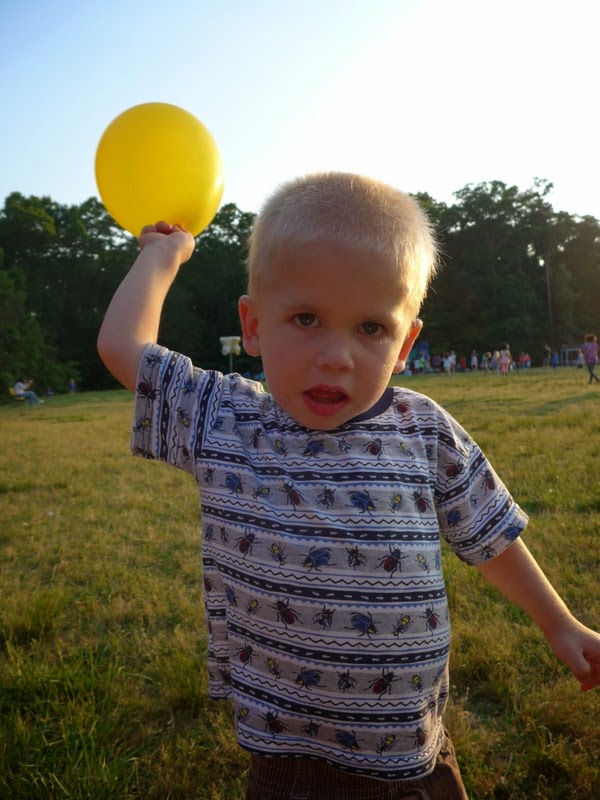 I kept trying to get a picture of Benjamin's bull horns—it's his new way of greeting people for whatever reason—but he would not do them for the camera. He did them for Miss Annie at the library. He did them charging out to his sisters in the field. But will he do them for Mom? No.

Eventually he said he'd do them if Daddy did them, too, but he wasn't very enthusiastic about it: 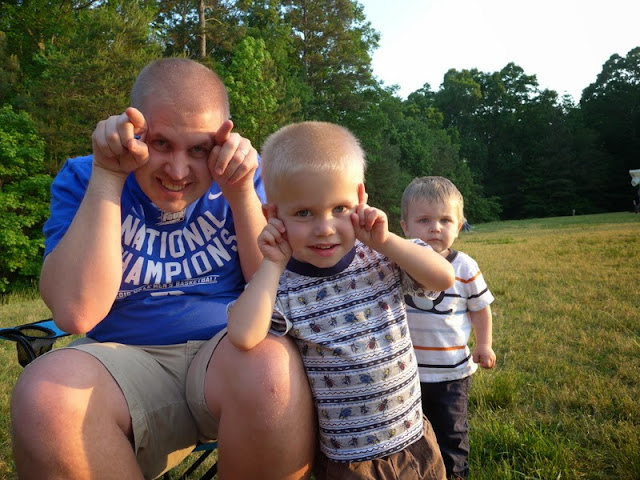 He was pretty well ready for bed at this point and kept requesting we go home to read stories. In fact, even though he wasn't happy to be put to bed and fought a valiant fight, he's currently the only one asleep over here...
Posted by Nancy at 9:38 PM