Even in the throes of labour it was difficult for me to imagine actually having another baby. I couldn't picture another baby. Even with her feet jabbing my rib cage constantly I somehow couldn't all the way believe there was an entire human being inside of me the past several months. And yet--look at that--there was!

If Andrew or I have any concern about bringing another child into our lives, our family, the world, we are not the only ones. Concern Baby is concerned.

She's concerned about pretty much everything. She'll open her eyes, look around, and sneer at everything, wondering, I'm sure, what in the world she's doing here.

Now that she's here it already feels normal again (or nearly normal) to be caring full-time for a tiny, completely dependent little person. That said, I know it's going to be a whole new ball game once we're home in a house full of children, rather than being doted upon by hospital staff.

Andrew brought the kids in to meet Zoë on Saturday afternoon. They were one-part awed, one-part disgusted (Zoë still hadn't had a bath; they wait at least 12 hours to allow the baby time to both absorb some vernix and to prove they're capable of regulating their body temperature on their own).

Rachel's face in this picture is priceless (and Miriam's shirt is on backwards): 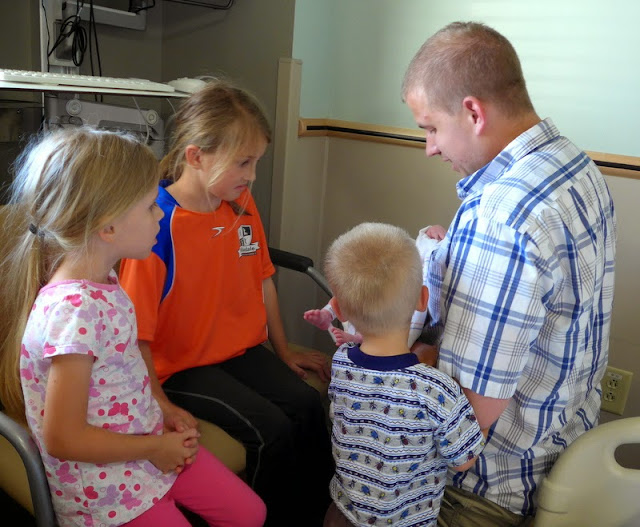 I'm not sure if Andrew was showing her the umbilical cord or a chunk of vernix, but whatever it was Rachel was not impressed. Here's Rachel a little more at ease: 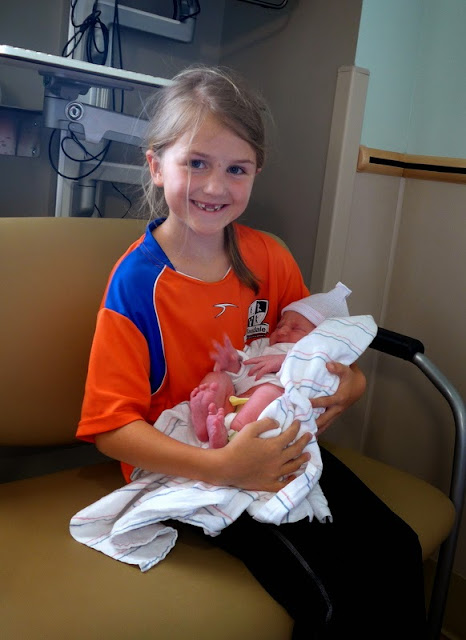 And here's Miriam holding Zoë for the first time: 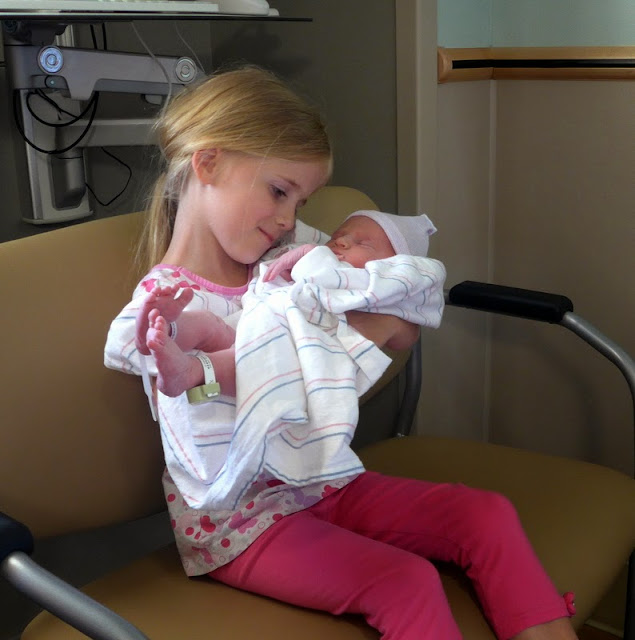 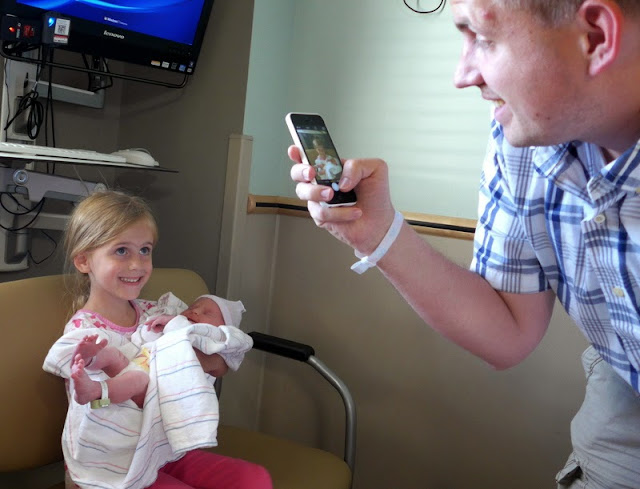 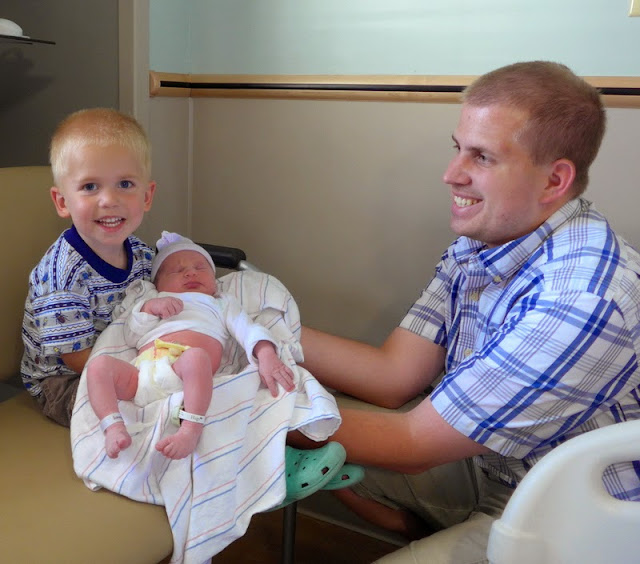 He was such a sweetheart, and it turns out he listened rather intently at the sibling class we went to a couple weeks ago.

I'm pretty sure he heard that line once—at the class—and tucked it away for future news. We certainly didn't review the information before his visit. Sometimes it's nice to see evidence that he can listen because so often we only see evidence that points to the contrary. In fact, one of Benjamin's most frequently used words is, "What?" (only he says, "Ut?").

We'll say something perfectly simple, like, "Put your shoes away," and he'll say, "Ut? Ut you say? Ut?"

Often we can turn it around and say, "I know you heard me. What did I say?" and he'll answer (usually correctly), but other times we have to repeat, repeat, repeat (until we feel like we're going crazy).

At one point while I was labouring my nurse walked in to check on me and informed us that a little boy had just been born in the next room. After she left I turned to Andrew and whined one of Benjamin's catchphrases: "When's it gun' be my turn?"

Andrew looked at me and responded in perfect Benjamin fashion, "Ut? Ut you say, Mom? Ut?"

And we both thought we were so funny. It's probably a good thing no one else was around to hear that exchange because they'd probably had thought we were crazy, but it did serve to lighten the mood.

Anyway, here are all four children together (with Miriam's shirt now on the right way): 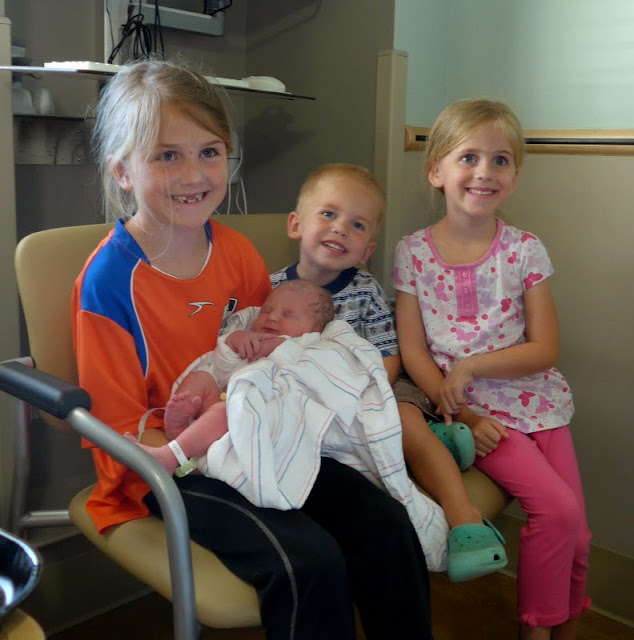 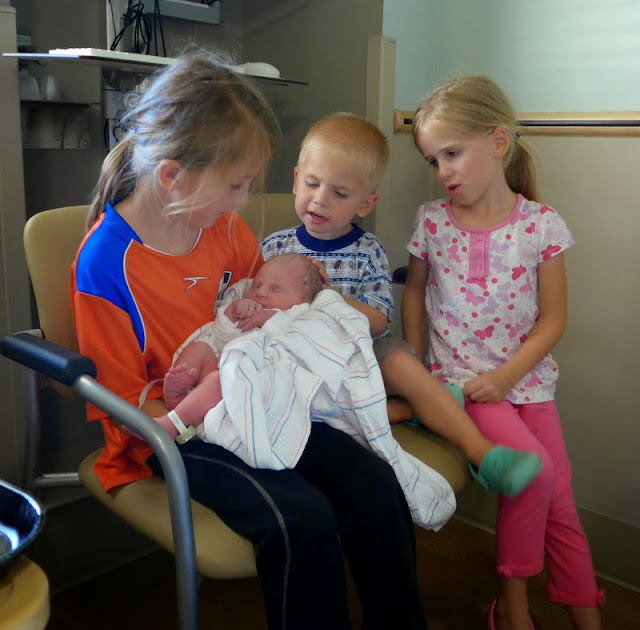 And here's a picture of me and Zoë (there's one from the delivery room as well but it left me feeling a little too...exposed...so I made Andrew take a new one): 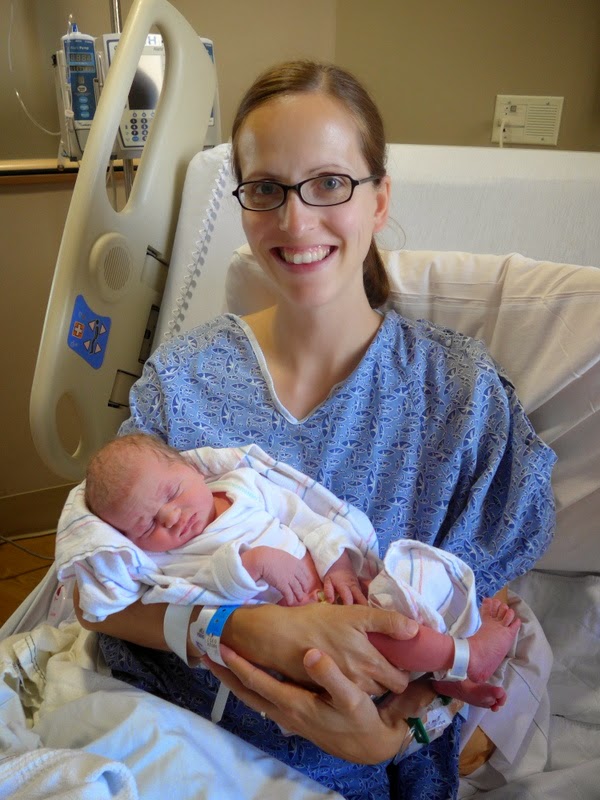 And here's our first family photo, taken with our trusty timer: 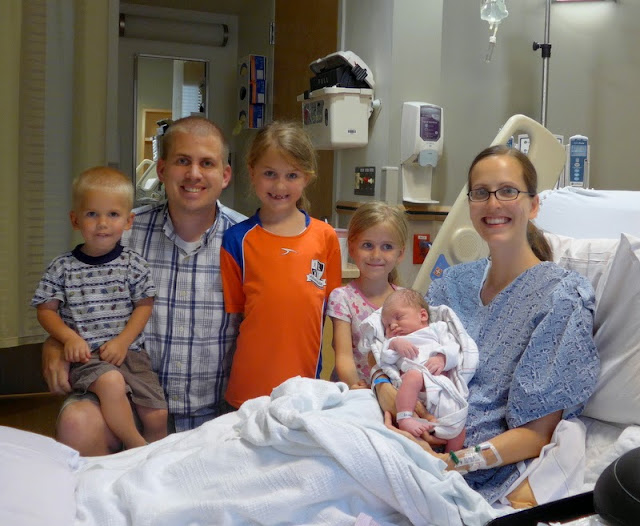 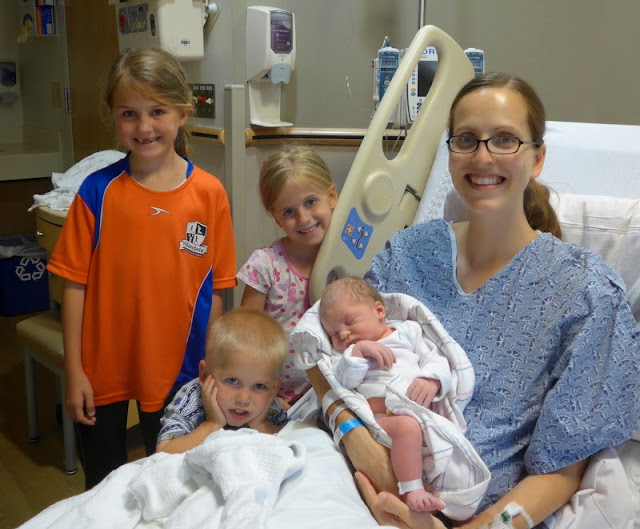 After delivery they hooked me up to some oxytocin to help get my uterus back into shape. Their reasoning was that the more pregnancies you've had, the longer it takes the uterus to shrink back to its original size. This was my first time on oxytocin and...it definitely caused some amazing contractions. My nurse eventually took pity on me and didn't make me finish the whole bag.

I still had to keep the IV line in for several hours though because I'm "higher risk," which was a little uncomfortable. I was so happy when they finally took it out!

Zoë did great. She had no issues with her blood sugar levels at all—except that they kept coming in to poke her heels. They called her "little blood sugar baby." Since her numbers were so well controlled on her own for the first twelve hours of life they abandoned measuring it, which was nice because her little heels are all bruised up as it is (so many pokes). If her numbers had been wonky she would have had to continue being tested, so I guess all my hard work controlling my blood sugar was worth it after all.

Oh! The night before she was born I had just finished filling out the last box on my record sheet, so I pulled out a new one and wrote down the dates May 23 through June 2. "Oh, Baby," I sighed, patting my big tummy. "I really didn't want to start another one of these sheets."

She must have understood because she came before I had to record any blood sugar numbers on that new sheet! What a considerate baby!

Here she is looking a little more at ease with life: 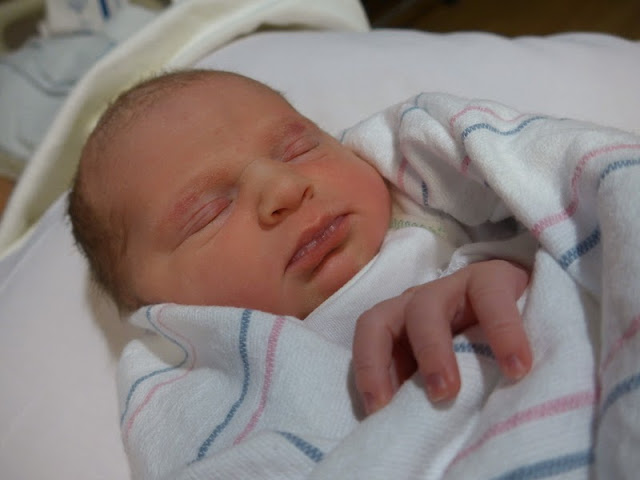 Her hair makes me laugh. Rachel's hair was so long I was clipping it out of her eyes when she was just a few weeks old, so when Dr. Choi said, "I see lots of hair," that's kind of what I was expecting. Zoë's hair, however, is a little more "business in the front, party in the back."*

She's practically bald on top but has beautiful thick hair in the back. 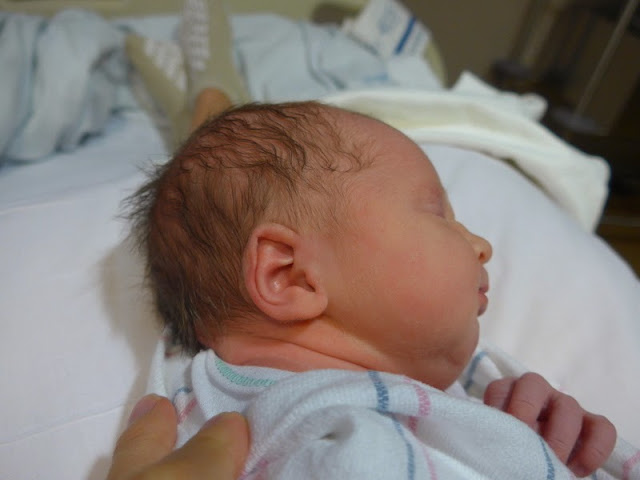 She also has hairy ears like Rachel did, but where you could practically comb the tufts of hair on Rachel's ears, Zoë's ears are just fuzzy, fuzzy, fuzzy.

She sure is a good baby: lots of eating, lots of pooping, not a lot of screaming. Quite enjoyable, really. 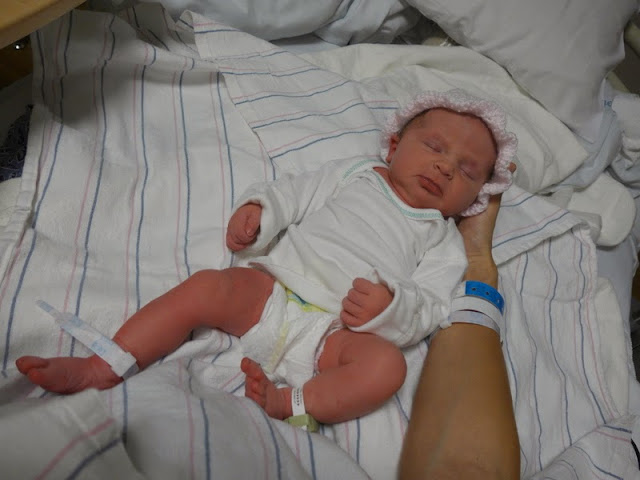 *Disclaimer: I've never actually seen the movie this quote comes from. But I have heard the quote.
Posted by Nancy at 1:26 PM