A message came home from the school informing parents that they still needed volunteers for field day, specifically for the second grade so I sent the PE teacher an email saying that I would be there...unless I was busy having a baby.

I was put on the first shift in the "wellness tent," which meant that I just sat there waiting for children to injure themselves, but our morning went rather smoothly and we hardly saw a child until they started filtering through to get drinks or to squeeze a sponge over their heads. They were really into the idea of cooling off by dumping water on themselves even though we lucked out and got a 70°F morning for our field day. (Yesterday was field day for kindergarten and grade one and although we weren't there for that we did walk to the park—and then looked longingly at the pool because it was so hot and humid, but today? Today was beautiful.)

We stayed at the wellness tent for about an hour before Miriam and Benjamin got bored enough that we decided to follow around Rachel's group for a while.

Our favourite station, I think, was the jump rope station. Rachel's become quite the pro, both on her own and also with others spinning the rope for her. Here she is mid-jump: 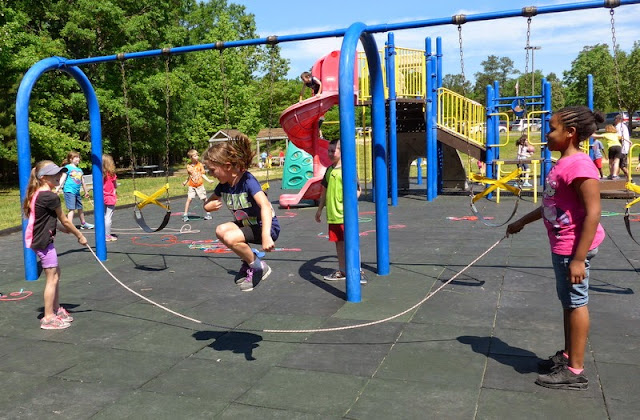 And here she is gracing me with a glance and a smile: 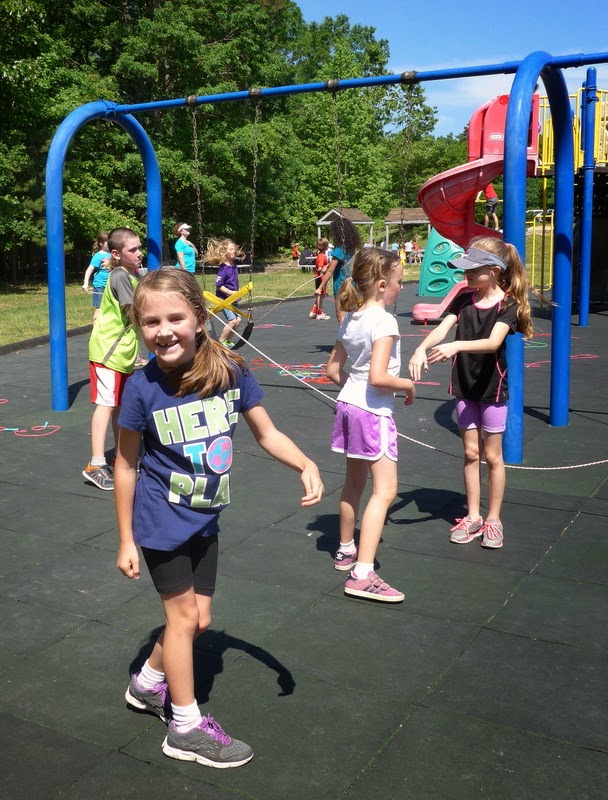 Miriam didn't quite get the concept of jumping over the rope but she was great at jumping under it: 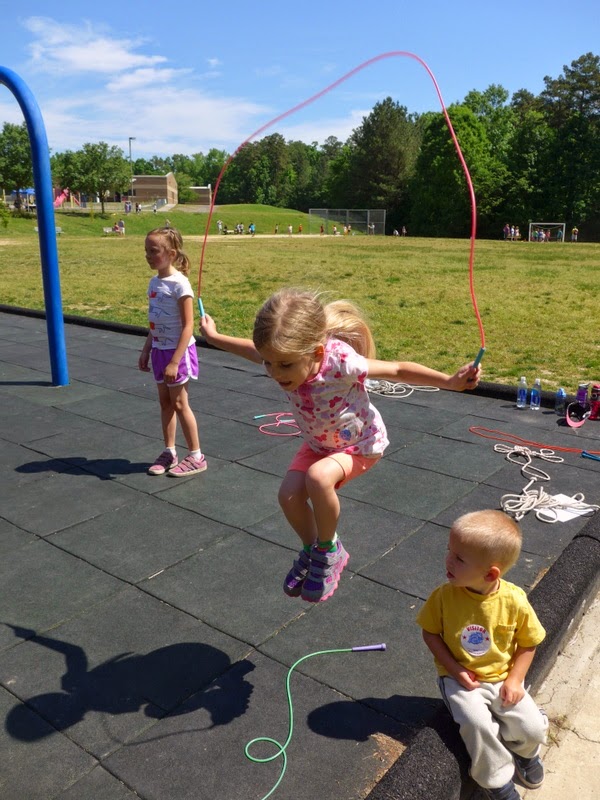 Rachel's so proficient at jumping rope now that she's doing tricks and things! She can do criss-cross arms and everything. I took a turn jumping rope as well—and, at nine months pregnant can still manage criss-cross arms—but that nearly made me wet my pants so I cut my turn short.

I openly welcome the day my bladder isn't being constantly squished by another human being (no pressure, Zoë, but you've got 19 days to get out—the sooner the better).

I'm trying not to be too impatient because "full term" is technically 39 weeks now (whereas doctors used to say 37 weeks was full term, now that's considered "early term" and you're only full term weeks 39 through 40) and I'm fully supportive of that. Premature babies are no fun and I find it slightly annoying when pregnant mothers are in a big rush to get their babies out. I had a friend once (actually, my friend's little sister—or my little sister's friend (both ways work)) post on Facebook, "I'm 37 weeks, which is full term, so I'm basically overdue but my doctor won't let me schedule an induction!" and I was like, "Sweetie—you can't schedule an elective induction because you still have two weeks until your baby is full term." But she wouldn't believe me even though I posted an article from the American Congress of Obstetricians and Gynecologists to back up my argument because she went to a birthing class so she knows (well, la-dee-dah).

Having had a premature baby, I understand that they're better in than out until they're term. Full term is best, honestly (and two of mine were full term) but right now—even though Andrew constantly makes fun of me because of this Facebook argument I got into—I'm kind of ready.

Mostly because I just want to eat stuff again without stressing out about every little thing that goes into my mouth. I've never had an eating disorder and have never really cared what number registers on the scale but I'm pretty sure I'm coming close to understanding what obsessing over eating is like.

My meals are carefully calculated. My preschooler reads nutrition labels, carefully adds up carbs for me and weighing them against grams of proteins. It's basically become a family obsession because Mom. Needs. Good. Blood. Sugar. Numbers. (Or she will cry).

I eat for, exercise for, sleep for good numbers.

I think I only cry because I'm so invested in this. I try so hard. And, honestly, my numbers are looking pretty great (not that I'm bragging (I might be bragging a little bit)). However! I really don't know how long I can carry on like this. I really would like to, for example, eat a sandwich with two slices of bread or, you know, eat an entire banana if I want to rather than trying to make someone else eat the other half. It's not so much that I crave eating unhealthily; I crave eating normally. Normal people can eat a banana with breakfast or have a closed-faced sandwich for lunch. I can't. Whatever.

Nineteen more days of this (as long as Zoë comes on time).

I can do nineteen more days of this.

But, I mean, technically Zoë's lungs and central nervous system should be developed well enough by now that she'd be fine. She is term, after all. So if she came after only one more day of being diabetic I'd be okay with that. Nineteen days sounds doable at this point. Slightly miserable, but certainly doable. One day sounds like...awesomazing.

But I'm fully expecting to deliver at 39 weeks and 5 days (because that's when both Rachel and Miriam came).

Here are some shots of Miriam at the bubble station. She was hilarious with those big bubbles! 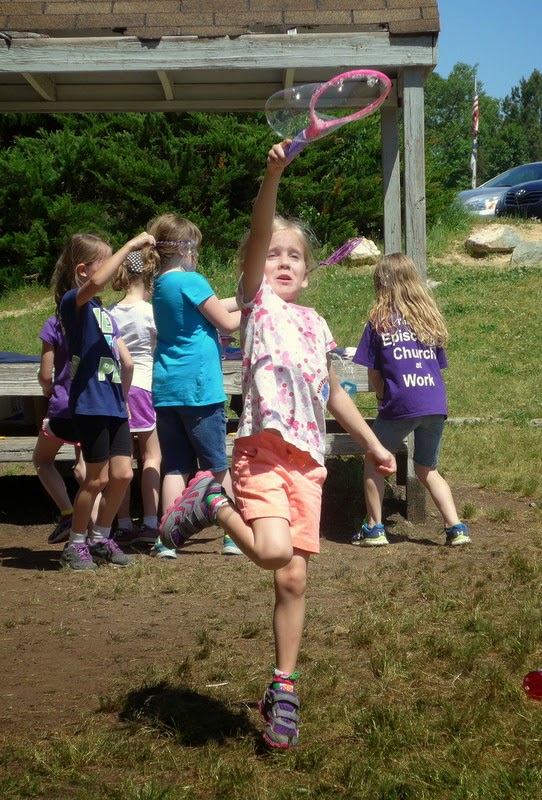 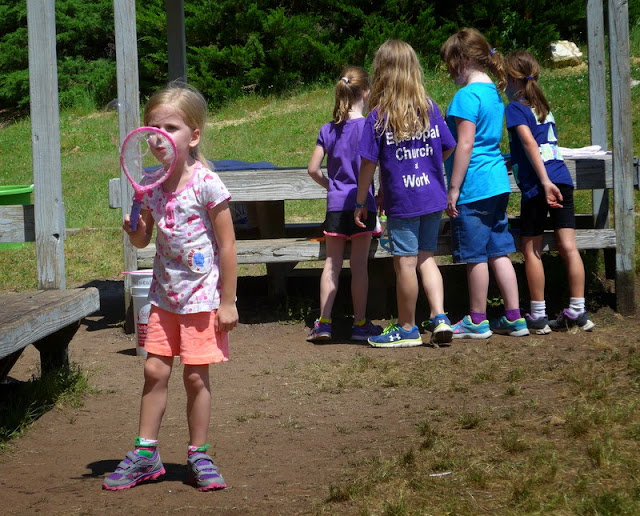 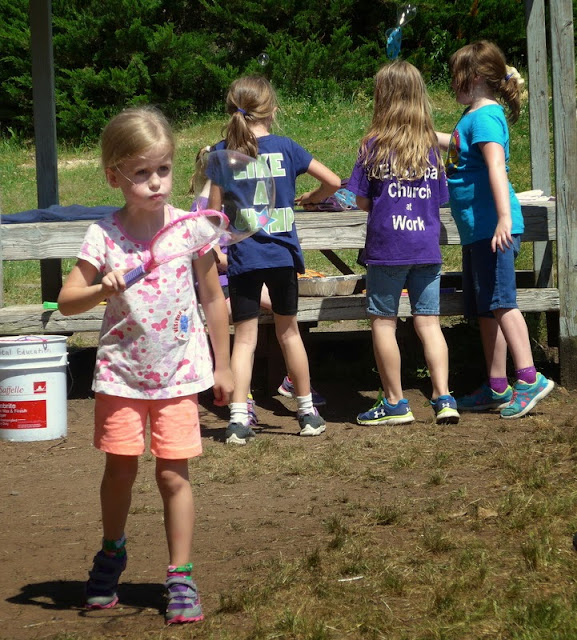 Rachel, you might have noticed, is in the background with some of her friends. That was mostly where she was all day. She didn't even say goodbye to us when we left—she just got in line and went back inside with her classmates. I suppose that's fine...but I'm not that uncool, am I?

Maybe she'd have acted like she knew me if I hadn't insisted on jumping rope...and nearly wetting my pants in public. Who knows?

Benjamin was afraid of being trampled (with good reason) so he hung out by me. 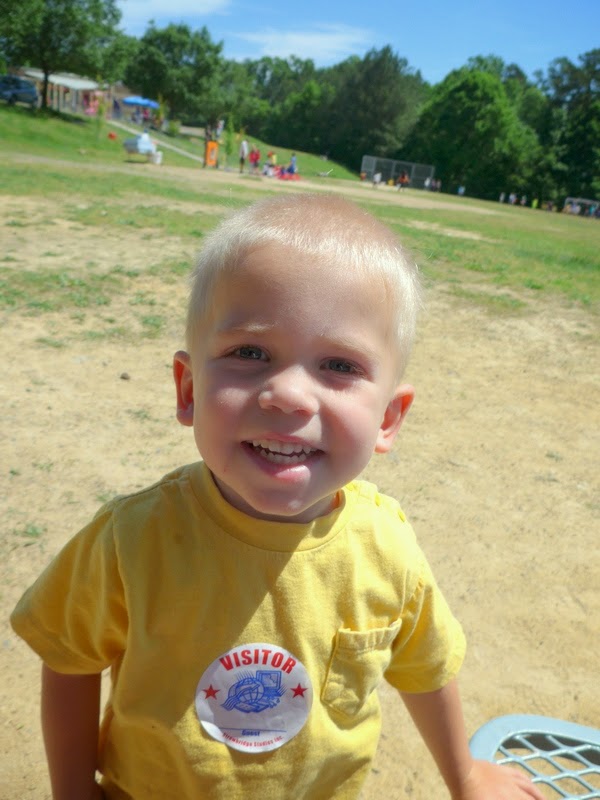 The cup stacking station was a lot of fun and it was more challenging than it looks because the breeze was rather rambunctious at times. I wouldn't say it was windy, necessarily, but the wind was playful enough to send those cups scattering—with children scrambling all over the place after them. 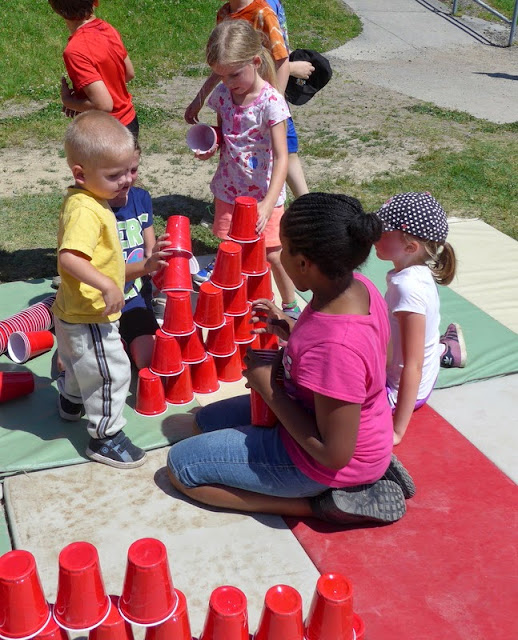 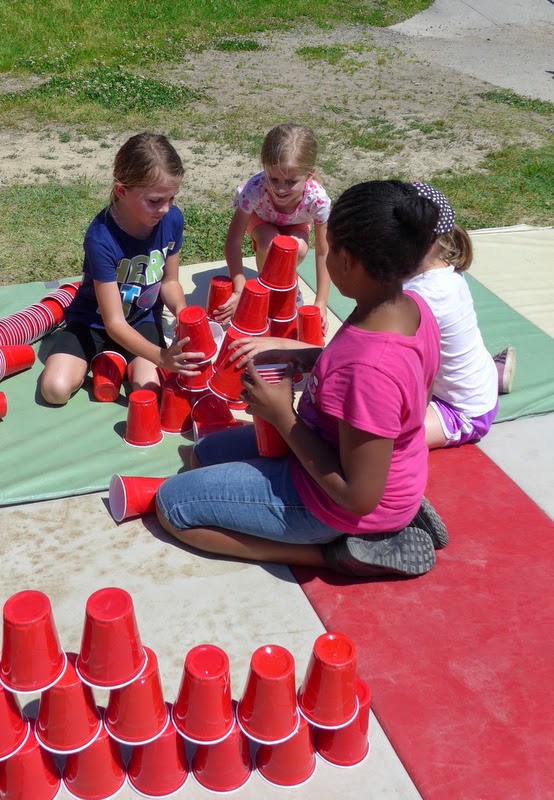 There were ten stations total but I didn't take pictures of all of them, obviously. The girls had so much fun (and Benjamin did, too, when he was brave enough to join in with the big kids). Miriam was gushing all day about how she'll be in kindergarten next May and will get to be in field day for real. She's quite excited about starting next school year...and the current one hasn't even ended yet!
Posted by Nancy at 9:49 PM