My mom is doing a series of posts about her life history and her most recent one was describing the process of freezing corn on the farm. She says,


When Colleen married her farmer, and was about to harvest her corn for the first time, she called Mom and said, "I don't know how I am going to do it all without any children to help me!" Mom assured her that it might actually be easier without the help of children! That was the first time I realized that the joyful event that freezing corn was--was a carefully created tradition that required patience and sacrifice on the part of our parents. We thought they needed us, but really we needed to help.

"Amen!" is what I thought when Miriam asked if she could make banana bread "by herself" this afternoon. Baking is another one of those things that is much easier without the help of children...and yet something children need to help with.

To her credit, Miriam did do a lot of the work herself. She mashed the bananas, which is my least favourite job (I made Benjamin do it the last time I made banana bread (we haven't been eating bananas very fast lately and today was another cool, rainy day)). She measured the flour, baking soda, baking powder and salt, but the sugar container was nearly empty so I had to get out our big bin and fill it up before she could measure that.

"Is it alright if some of it floofed out of the bowl?" she came to ask me while I was putting the sugar bin away.

But then I saw how much "floofed" out and cringed inside.


Then came the egg cracking, which she wanted to do by herself, of course. The first one she cracked all over the table. The second one she managed to crack the shell—and peel off quite a bit of it—but didn't break the membrane. It was all quite messy but we did eventually get enough egg in there.

I spooned it into the muffin tins while she made the streusel topping, and then she crumbled that on top.

She was quite proud of what she did "all by herself." 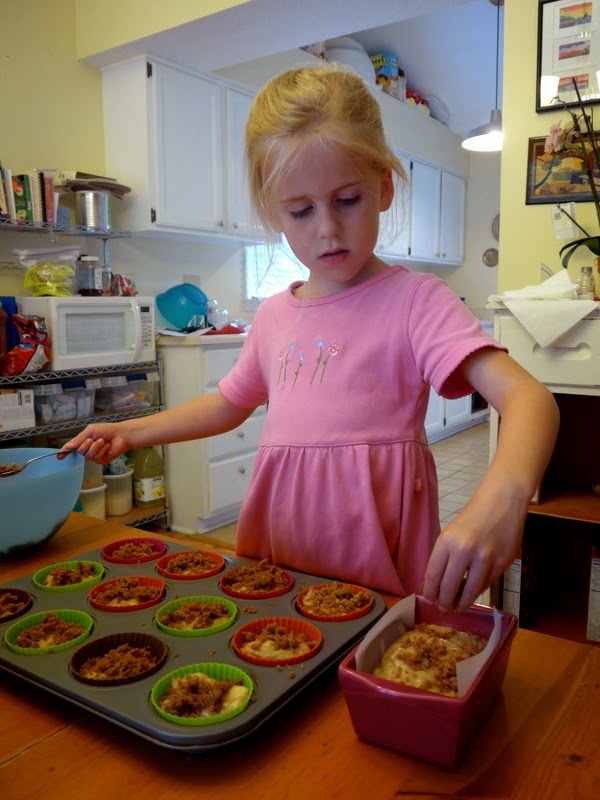 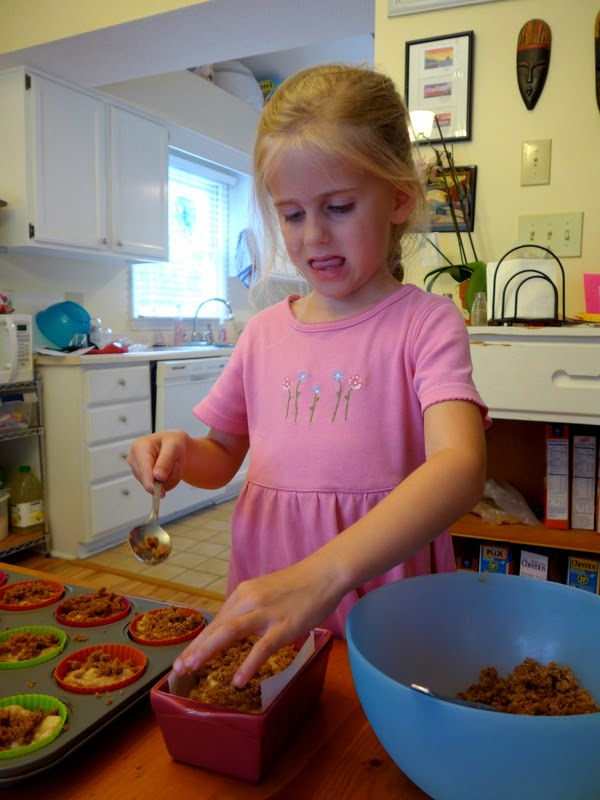 When they came out of the oven and had cooled a bit, the kids devoured a good half dozen for an after school snack. Miriam lovingly wrapped up the loaf for her preschool teacher—today was her last day and she's a little devastated about it but giving her teacher a loaf of banana bread and a homemade card made her feel a bit better about leaving preschool behind.

The funniest part of the afternoon was when she asked me, "Is there really an Iron Chef?"

"I think so," I answered. "It's a television show of sorts—like people go on and compete to be the best chef. It's kind of like a game."

"Oh," she said. "That's what Esther wants to be when she grows up."

Discussing their life aspirations was part of their "last day of preschool" lesson. There were several hopeful police officers and a few doctors. More unique responses were: a scientist (that was Miriam's), a plumber, and a queen.

After her baking success this afternoon, though, Miriam's thinking she might go up against Esther on "Iron Chef," if that's still a thing in twenty years.

(If you're wondering where Benjamin was throughout this process, he asked to take a nap this afternoon. Weird, right?)
Posted by Nancy at 9:05 PM