We don't always have our children teach family night lessons (I taught last week); they've simply been enthusiastic about the idea of teaching lessons (that or one-upping each other, I'm not sure which). This week Miriam volunteered; she worked hard to keep her lesson focused on a central theme and came up with multiple activities ands points of discussion all on her own. 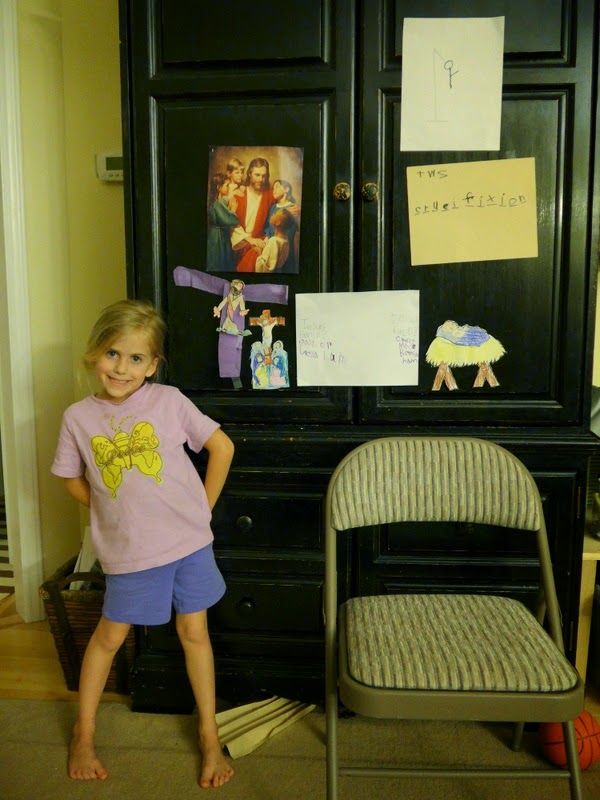 This is how she began her lesson: "Okay, everybody start guessing letters!"

"Perhaps you should explain what we're doing first," I suggested.

"Okay, well, we're going to play hangman so everyone needs to guess letters!" she said.

I started my lesson last week with a game of hangman, which is probably why she thought of doing that this week. The word she chose was "crucifixion" (the topic of her lesson) and it had everybody stumped for a while (except for me because I had written the word down for her earlier in the day). I really wasn't sure she'd be able to lead this game—crucifixion is a long word—but she kept track of the letters just fine, even if she was a little overenthusiastic about the hanging.

"The person who we're hanging starts with an R and ends with an L," she said, looking at Rachel as she drew the head under the gallows.

Fortunately, we only got a head, torso, and one arm up there.

"Too bad," Miriam sighed, climbing down from her chair and dropping her felt marker. "We didn't get to hang anybody today, but I did drop my marker, so..."

That totally makes up for the lack of hanging.

"Now," Miriam said pointing to the picture of Baby Jesus, "Who can tell me about this picture?"

She had a paper up that said, "Jesus hwen?" and we were supposed to tell about when and where the picture took place. We answered that the manger picture was from Christmas and that Jesus was born in Bethlehem. She wrote that down.

"Good," she said. "Now, who can tell me about this picture?" she asked, indicating the picture of the crucifixion she'd coloured. We answered that it was around Easter in Jerusalem.

While Andrew and I were busy laughing so hard that tears were running down our cheeks, Miriam played deny-meeny-miny-mo among us, eventually following our cues to pick Benjamin.

She got down a figure of Jesus that she had drawn and instructed him to hang Jesus on the cross.

"Come on, Ben! Reach higher! Push him down hard so he sticks!" she cheered.

Andrew and I were dying of laughter at this point (but trying to swallow our peals of laughter in order to appear invested in the lesson). What in the world made her think of a pin-the-Jesus-on-the-cross game?! She'd been so adamant the whole evening about hanging people (she was quite disappointed when we guessed the word crucifixion before successfully hanging "Rachel") and now she wanted us to take turns pinning Jesus to the cross?!

In our church we prefer to skim past the crucifixion in order to spend more time celebrating the resurrection. The symbol of a cross is one we've long eschewed, making this lesson even more hilarious (not that we avoid talking about the crucifixion, per se—because obviously our five-year-old knows enough to give a lesson on the topic; it's just that we usually address the topic with reverence and seriousness, and stay quite to-the-point...without devolving into pin-the-tail style games).

She ended the lesson on a serious note, bearing sweet testimony that Jesus died for us so we could return to live with Heavenly Father and have eternal life.

All in all it was a great lesson. Miriam was beaming with joy the entire time.

And there were no tears (besides the ones from laughing too hard).

I'll call that a Family Night win!
Posted by Nancy at 9:09 PM