The kids and I went for a walk this afternoon (it was a little chilly (for these parts) so no one else was really out) and the kids found a bunch of dropped fruit balls from a sweetgum tree so they started chucking them around. It's a game we've played for ages (we used to head outside during our North Carolina Christmases to have a fruit ball fights since we weren't ever able to have snowball fights) but today things took a new spin.

"It's the coronovirus!" Benjamin yelled, hurling a fruit ball at one of his sisters. "I'm going to infect you!" 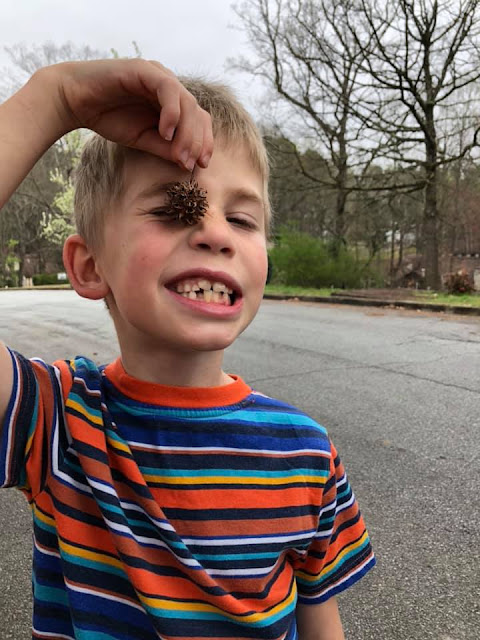 They started running around, chucking handfuls of fruit balls at each other while screaming made-up statistics about infection rates and so forth. At the end of their game they agreed that social distancing matters; after all, they could only launch those large-scale coronoviruses so far.

Perhaps Coronovirus Tag will be the next Ring Around the Rosy—slightly morbid, somewhat enjoyable (though the connection between that game and the Black Plague (which Benjamin believed was pronounced plag-you until just a few short days ago) is tenuous).
Posted by Nancy at 11:50 PM