Our new car seat arrived today. Getting a new car seat wasn't really part of our agenda. In fact, our original plan was for Rachel to stop growing so that she could just keep using her infant seat until we left for Egypt. After all, she can technically use that seat until she's a year old and she won't even be 13 months when we move to Cairo. We totally could have done it...

Except that she already passed the height limitation two months ago--she pulls her feet up with her hands when we put her in the car so that we don't squish them against the seat. And the buckles are increasingly difficult to do up. We have them almost as loose as they can go and I still find myself having to tug and pull and say, "Suck it in, girl! Suck it in!" Her head almost reaches the top of her seat.

Rachel was very excited when the mailman came to the door. She clapped her hands when the doorbell rang and pointed to the door. She thought this would be a good opportunity for her to get to see the outside world. It was a rainy day today and she was feeling cooped up.

Unfortunately she was eating lunch and was strapped in her highchair so I went to the door without her. The minute she realized this she threw her cracker on the floor and started screaming.

"I didn't wake the baby, did I?" asked the poor postman.

"No," I said over her shrieking, "She's just...uh...screaming. We were just having lunch."

"Oh, good. When I heard her crying I thought it was my fault. Sign here, please."

Well, it kind of was your fault, Mr. Postman. If you hadn't have come to the door she wouldn't have remembered that she wanted to go outside and then wouldn't be thinking she was hard done by and thereby wouldn't be screaming. No matter. We soon had a big, mysterious box in the living room. Rachel stopped screaming, pointed and said, "Ooooh!"

She had suddenly lost her appetite.

After somehow convincing her to finish her cracker, now twice dropped on the floor, I washed her off and let her investigate. She walked around all four sides of the box, licked it a couple of times, picked at the tape, tried to knock it over, banged on it like a drum, and scratched at some stickers.

I got out a pair of scissors and sliced open the top of the box and revealed, surprise!, a car seat. Just like the one pictured on the box. 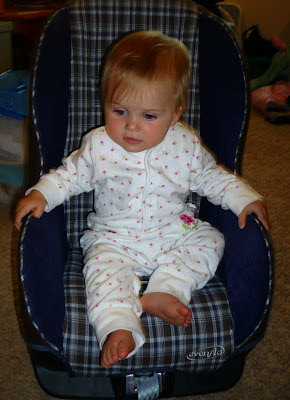 Let me think about this... 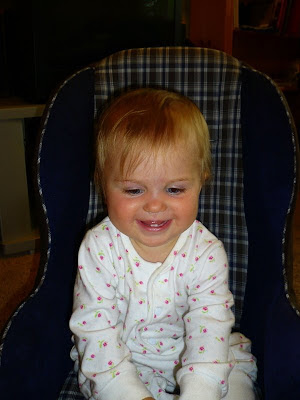 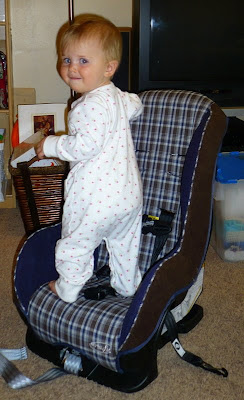 After playing on her car seat for a few minutes Rachel remembered the box. This next series of pictures I like to call "Rachel discovers box." 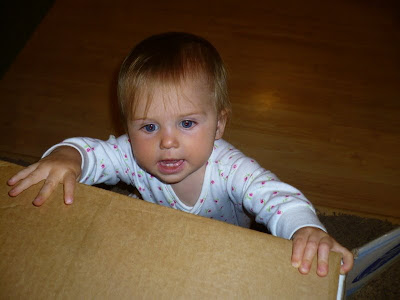 Hey! I think I could fit inside this thing! 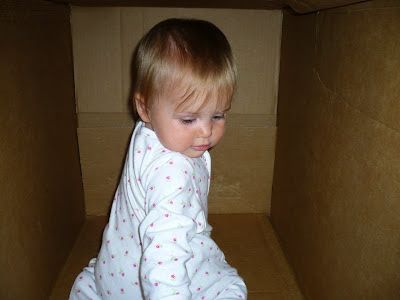 Promise you won't close me in, okay? 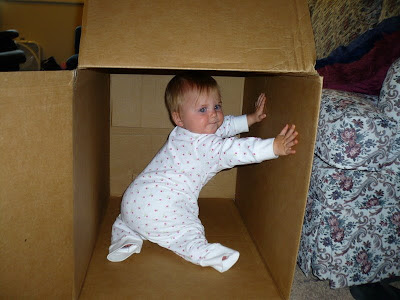 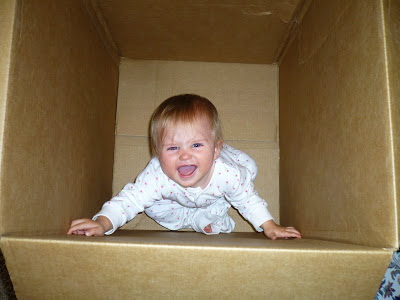 Hey! You trapped me! 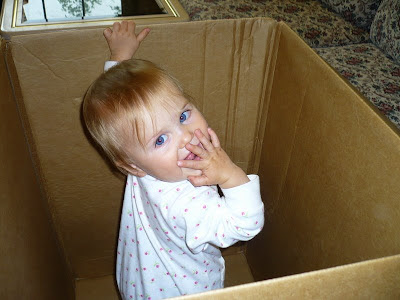 If I blow a kiss to you, will you take me out? 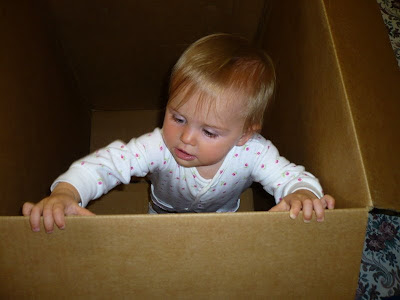 That's strange. Bribery usually works. Now how do I get out of here?

We played in the box all day. And since Rachel was so content playing, that means she stayed in her pyjamas all day. Gotta love days like that, don't you? One day I'm sure she'll be happy to play without me sitting there watching her. The minute I get up to do something productive she would flip out, so mostly I sat and watched her play all day, ready to take the block or ball she was handing me. Ready to give it back two seconds later. Ready to give her a reassuring smile every five seconds she lifted her head to make sure I was still there, not doing anything but watch her. Heaven forbid I should read or sew or write or go to the bathroom. Seperation anxiety is great, but you have to think outside of the box. 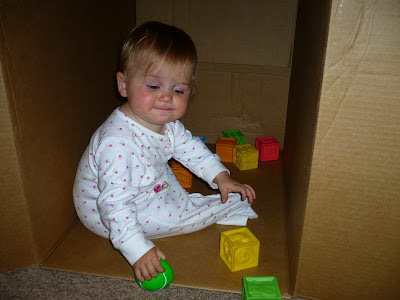 I happen to like being in the box, mom!

There are times I enjoy the separation anxiety thing. Like today when I said, "Okay, I need to go," and Rachel flipped out. And on Saturday night when we left her with Grandma (Heiss) so that we could go to stake conference and she flipped out. It makes me feel like she wants to be with me...and somehow that translates in my mind as doing a good job.

The times I don't like it are when she doesn't want me to hold her or play with her but she wants me close by. She wants to play alone, but I can't do my own thing. She has me all day long, and yet will scream if I leave her perphery for a split second.

I realize that this is a perfectly normal stage for children to go through, but honestly, Rachel, just because everyone else is doing it...
Posted by Nancy at 11:43 PM