I've had checks piling up on my desk for weeks, so Rachel and I finally trudged off to the bank today. We got all set to go, making sure we had gathered a few essentials: the stroller for walking, an extra diaper for emergencies, her favorite blankey for emotional meltdowns, and some kleenex for runny noses.

Double-checking to make sure I had my house key, I closed the door, lugged Rachel's stroller down the stairs and (after stopping to touch a tree, point out a bird, and pick a dandelion) we were on our way. 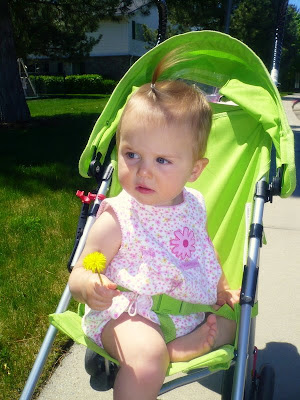 Rachel held onto her pretty flower the whole way to the bank (and back). She cuddled it up to her face and showed it to every car, person, or light pole that happened to cross her path. When there was no one else to show it to she would turn around, push her stroller visor out of the way, and show it to me. 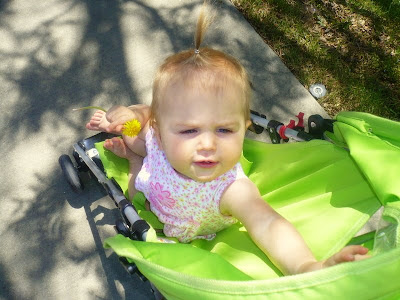 We were walking down a busy street, with cars whizzing past us. Rachel was holding out her flower to each car in turn. One white van that she held the flower out to slowed down and flipped a U-turn so that it was on our side of street. The driver, a lone male, sidled up beside us as if to offer a ride. I gave him my best "you're not welcome here" look.

Unlike my sister, I'm not very good at giving dirty looks. I try not to hand them out like candy, but in our culture it is kind of taboo for an unknown male to approach an unaccompanied woman. At least in my idiom it is, so the driver was therefore deserving of my most crusty look, whether he realized he had broken my rules or not.

He sped off, so I guess my glares can be pretty good, if necessary.

The remainder of our walk to the bank was pretty normal--we almost got hit 3 or 4 times while trying to cross state street, even though the "walk" sign was clearly in our favor. It's kind of like playing frogger. The left-turning cars turn the moment they think we're out of their path while the right-turning cars are cutting off our way to the safety of the sidewalk. Just good practice for Egypt, I guess.

Another little baby arrived at the bank at just the same time we did, which made Rachel very happy. She pointed at the baby and showed off her flower. The other mom and I were called up to the counter at the same time. We set up our babies facing each other so that they could chat while we did our business.

It seemed to keep them happy enough, until a man approached Rachel, completely ignoring the sign dictating to "wait here for next available teller."

I looked at the man. It was the driver of the white van. He broke my idiom twice. Not only do I believe that men should not approach women, I believe that people should obey signs. He got another crusty look.

Completely ignoring my glare--okay, so maybe it wasn't as mean of a look as I intended--he reached out and stroked Rachel's cheek.

"Here's the pretty girl I saw on the sidewalk," he crooned, tugging gently at her ponytail.

Rachel recoiled. Apparently she had the same feelings for the man that I did. I don't know why I didn't like him. I just didn't. Seeing him look at my baby from his white van gave me shivers.

I grew up in a big city. I was taught not to talk to strangers, to not take rides from strangers, and certainly to not let strangers touch me. Sometimes we would be warned to avoid a certain color and type of vehicle before being dismissed from school for the day. Little kids are picked off the street all the time.

I thought everyone was taught that. But perhaps this man missed that day of school.

"It's okay, baby," I said, protectively pulling her stroller closer to me.

"Have a nice day," gushed the teller. "Can I help you?" she asked the man.

"Thanks," I said through gritted teeth before barreling out the door.

The man's white van was sitting in the parking lot.

He approached the teller, so perhaps he really did just bank there.

Still, he made me nervous. Why did he slow down beside us? Why did he arrive at the bank moments after us...since he was driving and we were walking? Why did he give so much attention to my baby and ignore the other equally cute baby?

Those questions were enough to put me ill at ease. I walked away from the bank as fast as I could, trying to put as much ground between me and the man as possible before he left the bank. I checked behind me every so often to see if I could see his van following us.

Oddly enough, that's kind of hard to do while you're pushing a stroller--especially when you're on a busy street and there are too many cars to keep track of--so I pulled off onto a quiet side road before going home so that I could better check to see if he was following me. My plan was to run to Heather's or Kristi's if he happened to be.

The coast was clear. He probably was just an innocent bystander who needed a refresher course in "How to Not Scare the Living Daylights out of People 101."

We live in a scary world. I remember playing at the park by myself when I was four. I don't see any four year olds doing that today. This is America. Strange men don't slow down and drive beside women. They don't single them out in banks. His behavior was, by my standards, completely out of line.

Still too nervous to go home, Rachel and I went to the park instead. My friend Megan was out with her little boy, so it was nice to get to talk to someone while calming my nerves. Nice until two boxers came out on the field to see if our babies wanted to play with them. That helped me get brave enough to go inside pretty quick! 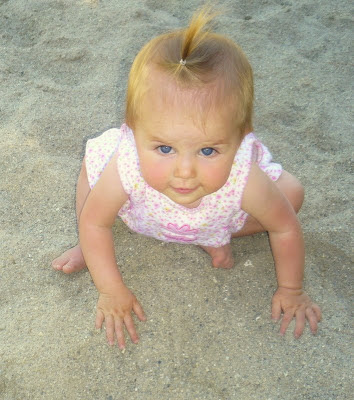 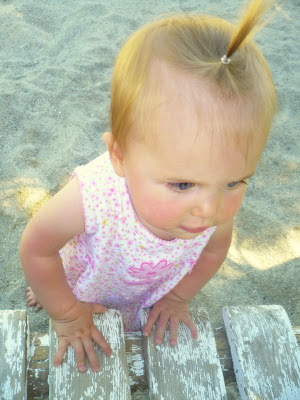 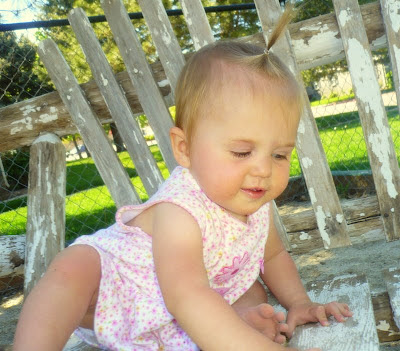 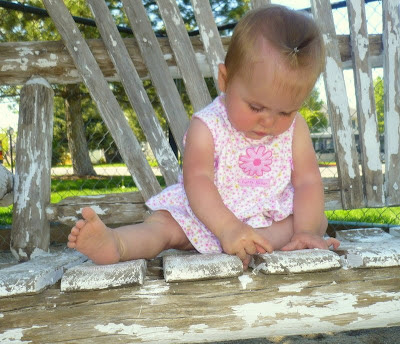 I'm not sure when I'll be going to the bank alone again.
Posted by Nancy at 12:57 AM