So I never thought it would happen but today it finally did: one of my children asked for a nap. I've always read about people's children doing this but have never experienced it for myself.
Miriam's been waking up in the night again. Haha. I think the only night she slept through the night the entire time Andrew's been gone was on Mother's Day Eve (a true Mother's Day Miracle). Anyway, she's getting her four canine teeth in right now and we all know how painfully slow a process teething is for Miriam. On top of that she's been sick. So, basically, we haven't been sleeping. That makes for a tired (and grumpy) baby, not to mention a tired (and grumpy) mommy.
Anyway, we just went on a walk to pick Rachel up from school and when we got home Miriam wanted to nurse. Again. So I fed her and when she was finished she said, "Blankey. Down. Bed."
"Do you want to have a nap?" I asked her.
"Yeah," she said.
So I put her down for a tears-free nap. 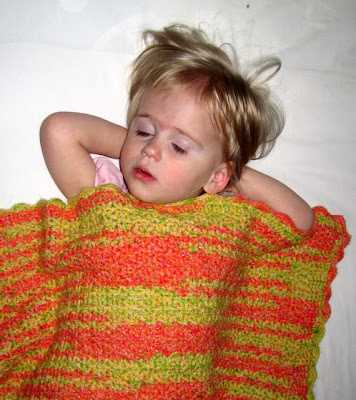 She laid down and put her hands behind her head so I had to sneak in and take a picture—she's so funny!

Also, look—I changed her clothes today! She's wearing pink instead of green. Not that I ever let my kids just sleep in their clothes and get up and wear the same clothes the next day. No, never. Not me.

Sheesh. It's not like her clothes were filthy...
Posted by Nancy at 2:04 PM