We spent the night in Flagstaff so that we would have time to stop by Sunset Crater and the Wupatki National Monument in the morning. The visitor's center for Sunset Crater was very interesting. Rachel's favourite part was the seismometer—they had a pad you could jump on and it would record your own personal earth quake. 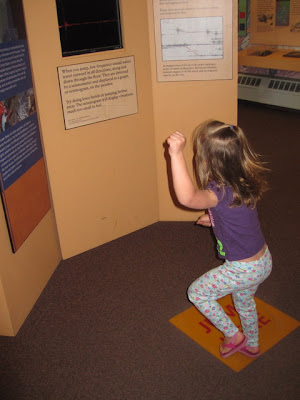 My favourite part was a sign that said something like, "Whether the natives found it terrifying or fascinating, they no doubt wanted to find out what it was," as if the quality of being terrified rules out the possibility of being fascinated. I submit that it's possible to be both terrified and fascinated at the same time.
The drive through the volcanic area was very interesting. Grandma said that parts of Hawaii look very similar. Lava flows cut up the landscape and ash covers more than 800 square miles (over 2000 square km) of the area. At times it looks like someone tried to pave the mountain since the ash looks strangely similar to the asphalt we were driving on. 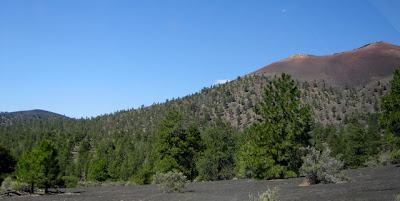 The visitor's center at Wupatki was very kid-friendly. Instead of signs reading "please DO NOT touch" their signs read "PLEASE TOUCH." 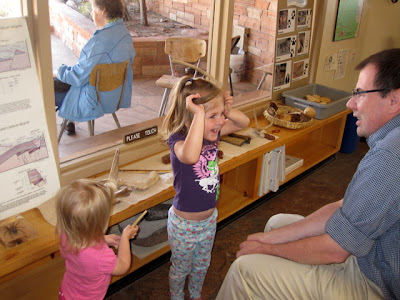 Going out of the visitor's center was a little bit like culture shock after the freedom we had experienced inside. We were asked to not touch rocks, to stay on the path, and to not walk on the walls bordering the path, among other things. It was a bit of a...battle. 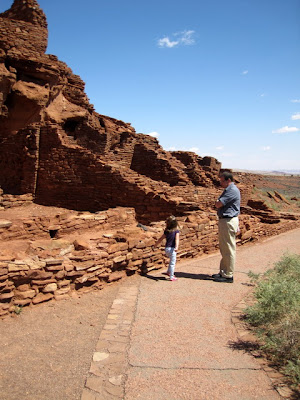 Wupatki was first inhabited around 500 AD but experienced an influx of population around 1100 AD...about the same time Sunset Crater had finished its terrifyingly fascinating eruptions. The area was dusted with enough volcanic ash to help the soil retain water, encouraging plant growth (instead of covering it so thick that nothing would grow for centuries, like what happened in areas closer to Sunset Crater). 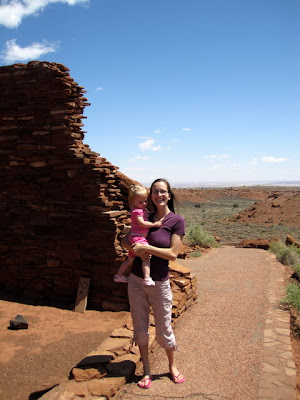 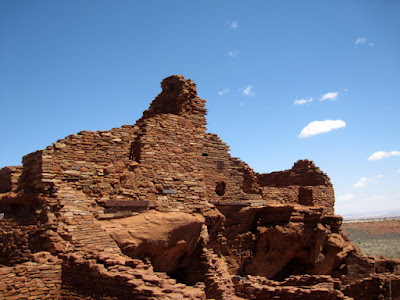 I wonder what Wupatki would have looked like before it was abandoned; I'm sure it was much more brilliant than it stands today. Still, it seems a little crude and primitive compared to al-Azhar mosque. I suppose it's similar to the feeling Andrew had in Ghana—people live like this? It's hard to imagine that two places that exist simultaneously could be so different. 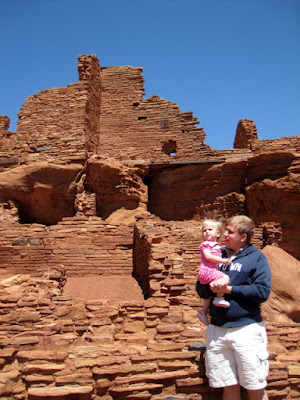 Like I said, Wupatki was abandoned (by 1225 AD) and fell to ruin so it's possible it was once much more grand than it stands today. It is curious to see the houses built up in the middle of no where and the people building them had just experienced a bit of a trauma, so I suppose the primitive workmanship is both understandable and admirable. 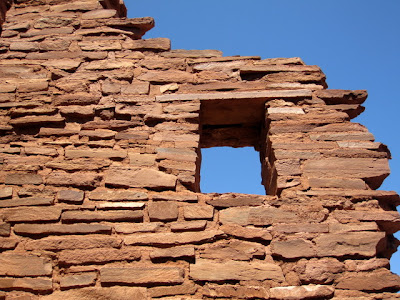 I'm really not sure what kind of house I'd be able to build in he middle of the desert with limited supplies (such as rocks and...mud). The fact that they had three storey houses built entirely of rocks mortared with mud boggles my mind. 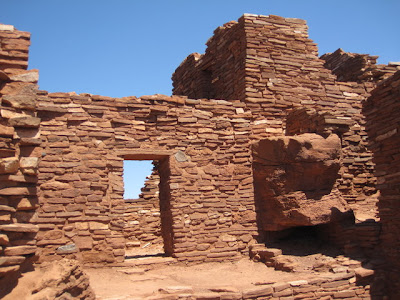 Equally mind-boggling is that when Wupatki was added to the National Register of Historic Places in October of 1966 they told the people living on the land that they could live there until they died, unless otherwise decided. Later it was decided that their herds were overgrazing so they were kicked out and forced to move across the river. How lovely. 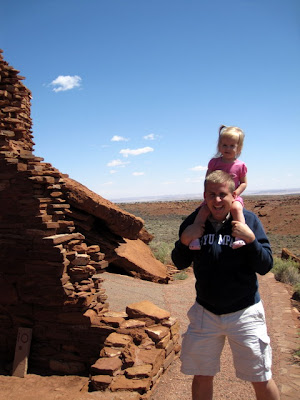 There's a blowhole near the ruins, with a grate covering the hole so that small children don't fall down inside and disappear forever. Andrew held Miriam over it, which made my heart sink into my stomach, so I chided him, so he put her down on the grate. Has he no respect for rules? 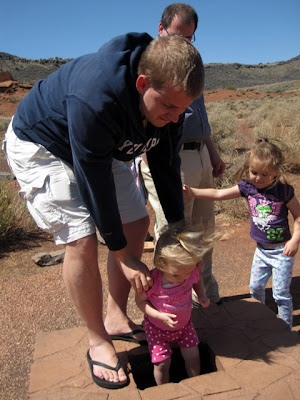 I quickly ushered him away from the blowhole and we went into the ball court where my girls were thrilled to be off the "path" and on the dirt. This time we were allowed to be "off the path" since the path included the arena but I had a heck of a time getting Miriam to put down the rocks she found. 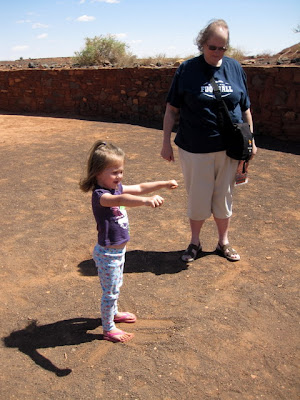 Those are $300 a piece. Seriously. I'm not sure they should have rocks at a place they allow children to be. No worries, though—they were eventually forced from her vicegrip and left for the next visitors to enjoy. 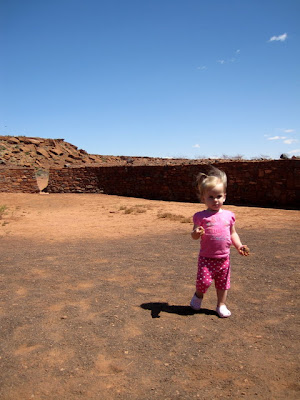 There was also one room that visitors were allowed to enter. Half of the room was walled by a natural outcropping of stone, so it was a rather convenient place to build. 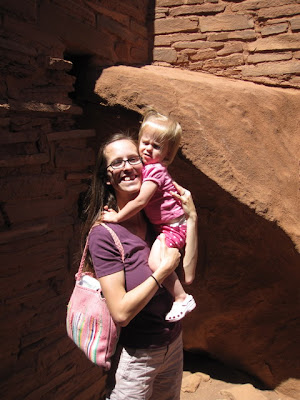 It was interesting to see the contrast of the landscape between the red rocks in the Wupatki area and the ashen land beyond it. 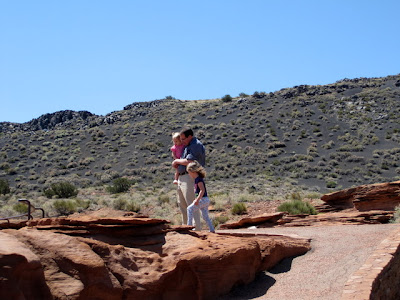 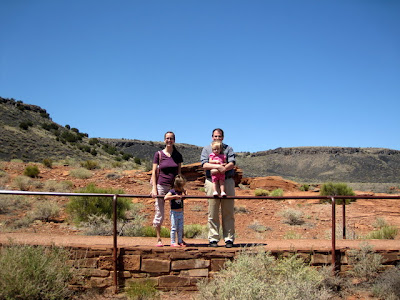 The rest of the day was just as beautiful, even though we spent the majority of it in the car. At least when we looked out the window we were seeing blue skies and sunshine instead of grey skies and blizzards! 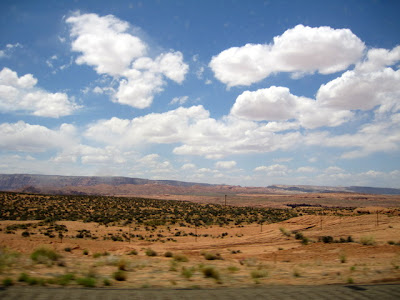