Koforidua and Burro (May 3)

We left Accra again this morning to head north again (you can’t really go south…), this time to the city of Kumasi. On our way, though, we took a long detour on horrible roads to a smaller city named Koforidua, current home of an incredible social entrepreneur—the guy who invented Cranium, the board game.

Whit Alexander initially worked for Microsoft back in the 90s and was part of their Encarta team, which helped make digital encyclopedias really useful (helping Wikipedia out years before it even existed). He left Microsoft after a few years to start his own company, but rather than get into the dotcom craziness (which would later come crashing down), he created a board game (the ever-awesome Cranium) which eventually grew into a huge gaming franchise. He sold the Cranium corporation off a few years ago and decided to move to Ghana and start up a socially sensitive business. 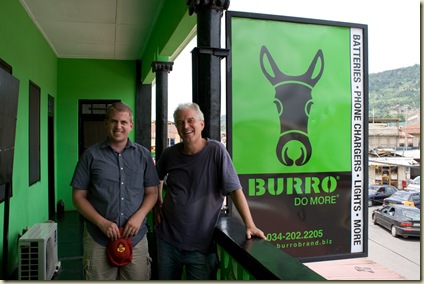 Most of Ghana is off the electrical grid, which is why companies like Empower Playgrounds have been working on innovative solutions for lighting and electricity. People out in the villages regularly use or have need of electricity—most use expensive and dangerous kerosene lamps for lighting, and almost everyone in Ghana has a cell phone. Phones need to be charged, obviously, which require most villagers to travel into some larger town once a week to plug in. Because kerosene is so expensive, lots of villagers have flashlights, but those use batteries, which are really expensive.

Whit noticed that villagers were spending and wasting tong of money on throwaway batters, so he created a product and a system that could reduce villagers’ battery cost and reduce or eliminate the need for kerosene. His company Burro is the result of this.

Burro distributes rechargeable batteries through a reseller-based subscription service. Villagers pay a 1 cedi deposit ($0.66) to begin their subscription and then take some AA batteries and a D-sized convertor. Once the batteries are dead (or “fallen” in Ghanaian parlance), they take them to the village reseller, who exchanges them for new ones for 20 pesawas each ($0.13).

The reseller meets with Burro route drivers once or twice a week to drop off the fallen batteries and buy new ones for village exchanges. The fallen batteries are then all taken back to the branch headquarters in Koforidua for recharging, and the cycle continues. It’s an ingenious idea and it’s had a ton of success so far. They also sell battery-operated lamps and battery packs for cell phones, so people don’t need to travel all the way to an electrical plug to charge their phones.Whit’s hoping to expand it to other branches throughout Ghana, and hopefully throughout West Africa once he gets the system perfected and profitable. It was incredible to see his energy and passion. I could never be an entrepreneur—I totally don’t have that type of personality—but it’s amazing to see what people like Whit can do. 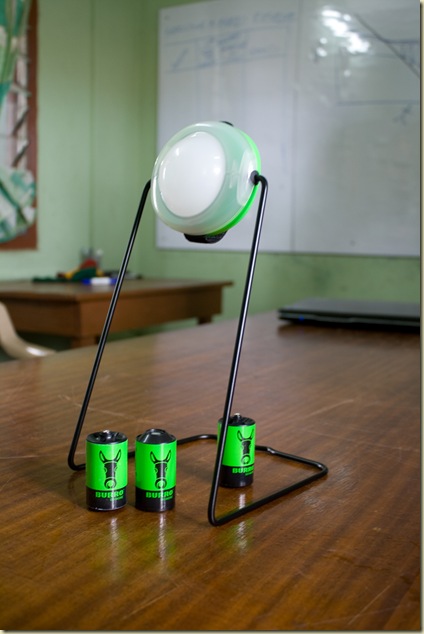 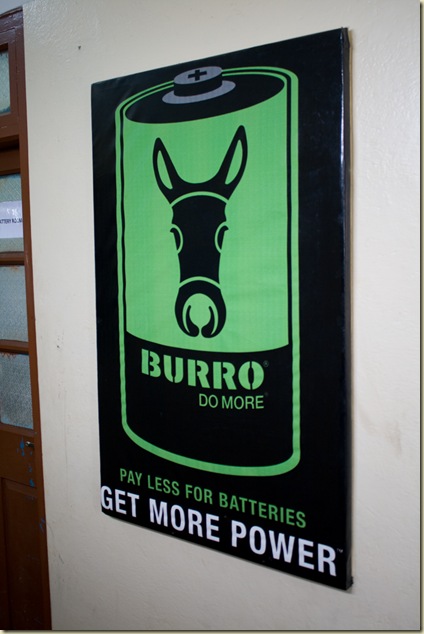 After meeting with him and touring the Burro facility, we all walked over to a local restaurant with Whit. Koforidua is so different from slummy Accra—it reminded me a lot more of smaller Middle Eastern cities like Helwan, Zagazig, or Giza and far less like the transplanted village life of Accra. I loved walking down the busy streets of Koforidua, narrowly escaping speeding taxis (my favorite thing to do! :) ). There’s just a different—more comfortable—feeling up here away from Accra. 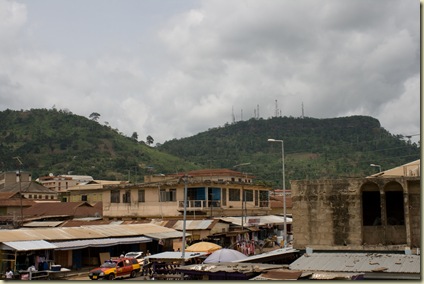 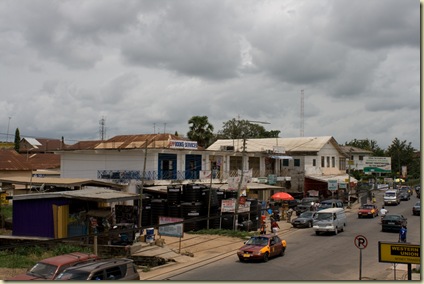 Lunch took three stinking hours—they cooked all our stuff one plate at a time (fortunately I was one of the first to get their food), so we left Koforidua later than we had intended. The drive to Kumasi took another few hours and we made it to our hotel late in the evening. I’m excited to check out this city tomorrow. I’m assuming and hoping that it’ll feel more like Koforidua, less like Accra, and more like the urban or semi-urban third world that I love so much.