Although I’ve been in the country for 5 days now, half of our group has been here for a lot longer. Six of the people in the study abroad came a few days early to stay with some village families in Pediatorkorpe, the final island before the Volta river meets the ocean (and henceforth known as the Island). Ben Markham, a BYU graduate and founder of Empower Playgrounds—the company that uses merry-go-rounds and swing sets to generate electricity for villages—has close connections to the Island, which has one of the early playgrounds. For the past couple years BYU students with the MPA trip have been going early to get a taste of rural Ghanaian life.

Today we left Ho and headed to the Island. I am so glad I got to see/experience the Island, but I’m even happier that I didn’t come early to do it for four days—it would have been absolutely terrifying.

We met up with Isaac, a member of the Church and employee of Empower Playgrounds, in the city/village of Big Ada. Isaac and a couple Islanders (Jacob the nurse and John the assemblyman) took us on a quick boat ride from the mainland to the Island, where we all gathered at the schoolyard (with the now-famous playground) before splitting off with the Island-goers. 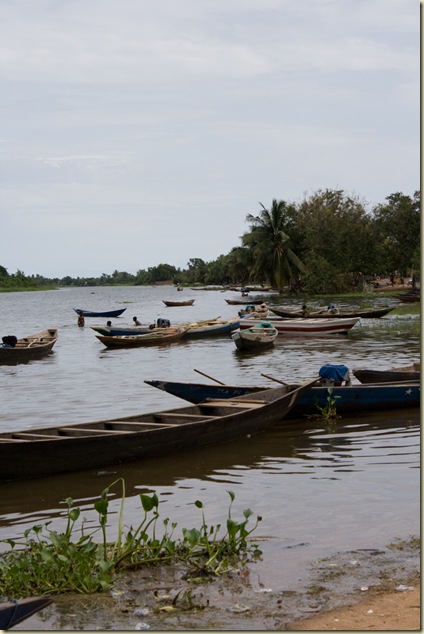 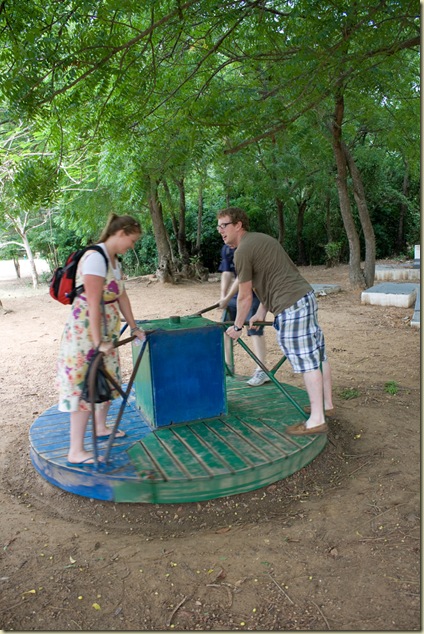 Most of the MPA students stayed with families spread across the Island in different villages, but in one case two students (Shanelle and Talia) stayed with the same family. Matthias and I went with them to visit their family for the afternoon. 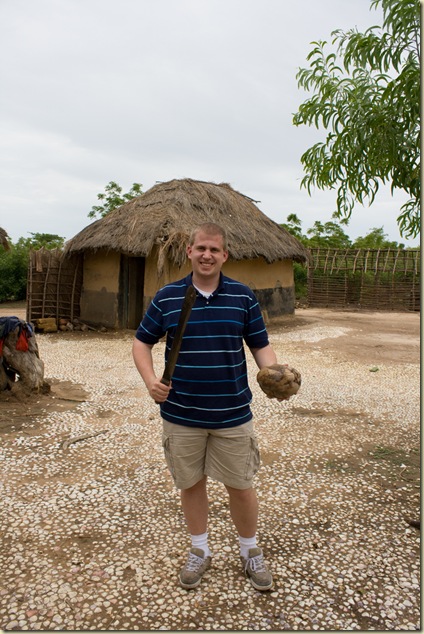 Part of the reason the Island would have been so terrifying for me (and why it was for some of the MPA students who stayed there) is the overwhelming use of seafood. Fish and oysters make up the majority of the Island diet—oysters so much that their shells are used to pave many of the mud paths. There are piles of thousands of oyster shells around the island. Some students had the same fish soup (complete with heads and other nastiness) every day for the whole 4 days—same not meaning same recipe, but the same batch, stored in a corner of the sweltering hot kitchen. Also, all their food was made with unfiltered and unboiled river water. Sleeping arrangements were also rather uncomfortable—most of the students slept on bamboo mats on the ground, just like the rest of the Ghanaians there. Combine all that with the 95–100˚ heat. Yeah. Wow. Unsurprisingly, most of the island-goers have been sick since joining up with the rest of the group last week.

Luckily the family we visited didn’t feed us any seafood. Instead their oldest son went and picked 4 coconuts, used a machete to open them up, and offered them to us. After drinking the milk, he then chopped it open and cut out a chunk from the husk to use as a scraper/spoon so we could eat the flesh. It was pretty good—the flesh was kind of slimy—but the coolest part was the fact that I was eating a coconut in a tiny Ghanaian island village. 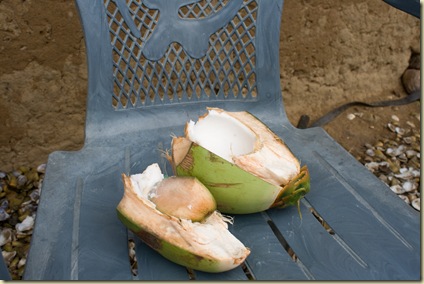 When we first came to the family’s house we noticed that they were all dressed in their best clothes. As it turns out, we came just minutes before their daughter’s engagement ceremony, so after eating the coconut, the family invited us to come to the ceremony. We walked through the jungle to a pavilion of sorts and were told to sit in plastic lawn chairs in front of the bride’s family, in the most conspicuous place possible.

Once they noticed we were there (we were pretty hard to miss…) they started translating the ceremony into English for us. We got to the ceremony as the groom’s family presented the dowry or bride payment or something to the bride’s family—a suitcase and a couple cases of Coca-Cola. 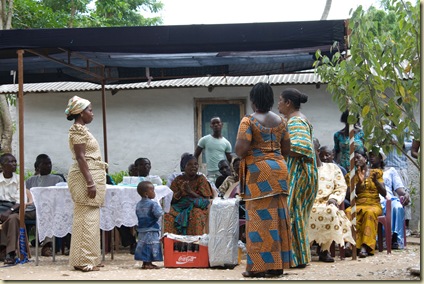 The master of ceremonies then announced that it was time for the bride (who was not present during the dowry part) to join the ceremony, but that someone “strong and fast” needed to go fetch her. He jokingly asked the crowd who would be willing to track her down—who had strong enough feet to undertake the dangerous journey. The bride’s mother offered to go, but she demanded that the audience pay her to do it, so she started collecting money from the guests. After collecting some money, she set out on the journey and ran around the patio a few times, pretending to look around for the missing bride. She then came back and told the crowd that they hadn’t given her enough money, and after collecting some more, she disappeared into the neighboring house to get her daughter. The mother was absolutely hilarious, as was the whole ceremonial search—the audience, and even the bored looking groom, laughed like crazy. 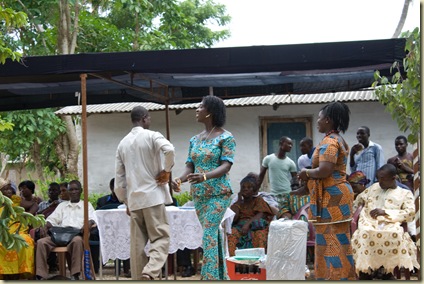 The mother led the bride out with loud African music blaring in the background. Both the bride and the groom wore cool looking gold outfits, and both looked entirely uninterested in getting married or even being there. No smiles or emotion at all. Her older sisters, who were sitting next to us, told us later that the couple actually had three kids already and have been living together for a few years. Although this was just the engagement ceremony, the family was counting it as the wedding too, given their peculiar circumstance. 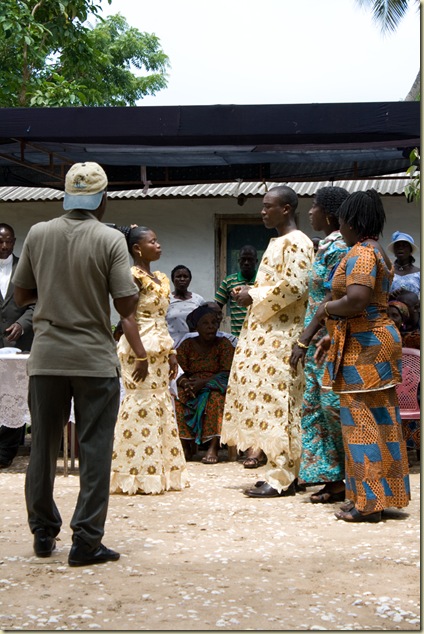 A village elder then came and presented the couple with a ring and family bible and gave a lengthy blessing on the ring in whatever language they were speaking (Twi maybe…). The village preacher then performed the most animated engagement/wedding ceremony I’ve ever heard. He did it in English and mostly kept yelling about how “the blood, the blood, the blood of Jesus will forever and forever keep them together and that the blood of Jesus, of Jesus, of Jesus, the blood, blood, blood, blood of Jesus made it possible for them to live in blissful, joyful, happy marriage.” Yeah. Imagine that times a lot, with the gusto of a southern evangelical preacher. It was awesome. 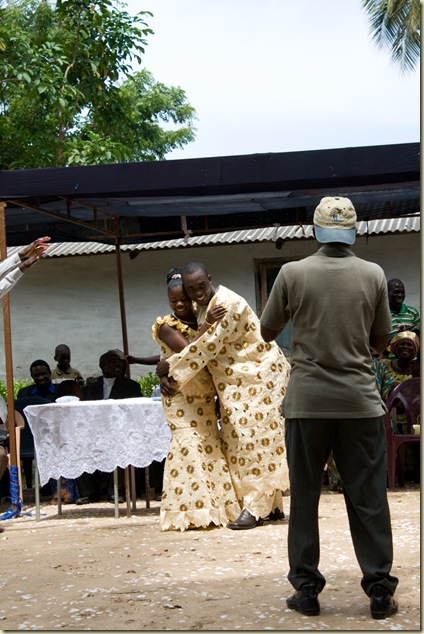 After the couple hugged to complete the ceremony, it was dancing time. 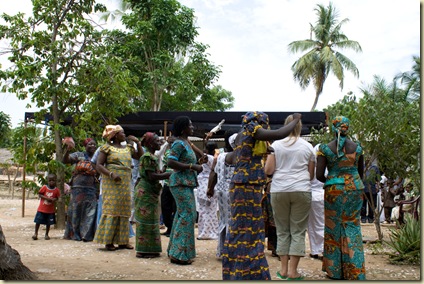 We unfortunately had to meet the rest of the group back at the school right after the dancing started, so we said farewell and traipsed back to the playground through the jungle.

The island nurse, Jacob, then took our group to the island medical clinic, which services the 600 residents of Pediatorkorpe and the 6,500 residents of the other nearby island. The clinic was tiny and heavily undersupplied, but it was impressive that Jacob is able to help so many people even with almost no real medical supplies. Here’s the barebones delivery room. 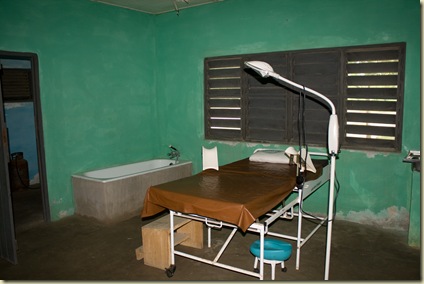 After the clinic we headed back to the mainland. Again, I’m so glad I got to visit it, but I’m even gladder that I didn’t sleep there. Yep. Gladder. That’s a word.

Jacob then drove us out to a small village with a newer and more durable version of the Empower Playground, manufactured by the company that makes the majority of American playground equipment (who’s name escapes me). As you could see in the picture above, the Island playground is rusting and in pretty sad shape (but still generates electricity). The newer equipment, though, is awesome. 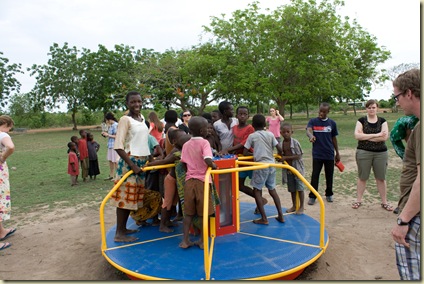 The electricity generated from these merry-go-rounds is channeled into a big battery in a room in the village school. The battery doesn’t provide the village with actual electricity; rather, it is the charging base for dozens of LED lanterns that students use to do their homework in the dark. 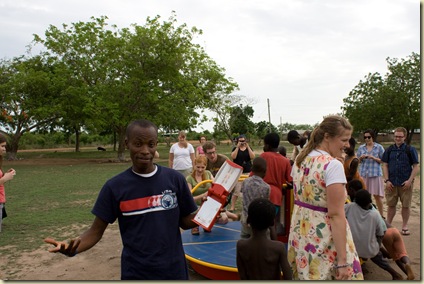 Our final stop for the day before getting back to Accra was the LDS Missionary Training Center (MTC) in Tema, a port city just outside of the capital. It was fascinating to talk with the MTC president and his wife and get a tour of the center. Missionaries sent to English- or French-speaking missions throughout most of Africa that don’t need language training are sent to the Ghana MTC for 3 weeks of training—those that do need to learn a language (like the 8 American missionaries who were on our flights from SLC to Accra and who were going to French-speaking Togo) go to the main MTC in Provo for 9 weeks. The MTC only goes through one “generation” of 25–40 missionaries at a time—once the group finishes the course, a new group arrives. 16 groups of missionaries are sent through each year. 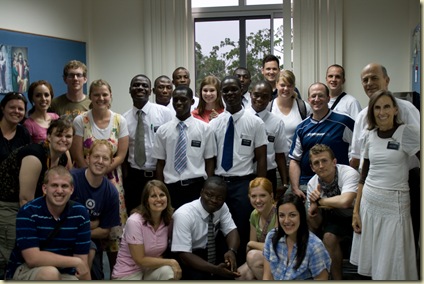 While the MTC facilities are relatively nice, the Church made a point to not make them palatial by any standard. Most of the missionaries that go through the MTC aren’t American, but native Africans, the majority of whom come from small mud hut villages like the ones we’ve been visiting. The Church doesn’t want to build up crazy high expectations for these extremely poor missionaries, many of whom will only ever sleep in a bed during those three weeks at the MTC. During and after their missions they’ll be back in mud huts with bamboo mats and with very little food. One of the biggest problems for newly arrived missionaries at the MTC is that most of them have serious tropical diseases, like malaria or typhoid, that need to be treated immediately. For some, it’s the only medical attention they’ll ever really get. 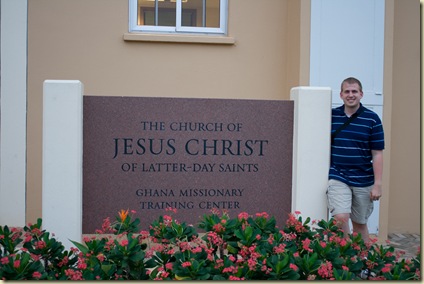 Again, the poverty here is absolutely incredible and mind-blowing. I can’t fathom people living in mud huts with oyster-shell paved paths, drinking river water and dying of diarrhea, dehydration, and malaria on a regular basis. Even more incredible is the fact that tons of West African young men somehow come up with a tiny sliver of money to go on missions in the same environment, either in Ghana, Nigeria, Togo/Benin, DR Congo, or elsewhere on the continent. Absolutely amazing.