Pokey the Tortoise (May 22)

We didn't have church until 12:30 in the afternoon. We were ready by 10:00 in the morning, complete with Rachel getting her hair curled by Grandma. Can you tell we've acclimatized to having 9:00 church? We hardly knew what to do with ourselves.
We took a few pictures of Rachel with her curly hair and then I sent the girls outside to play for a minute if they "promised not to get dirty" and then brought them back inside, literally, after a minute because they went straight for the dirt. 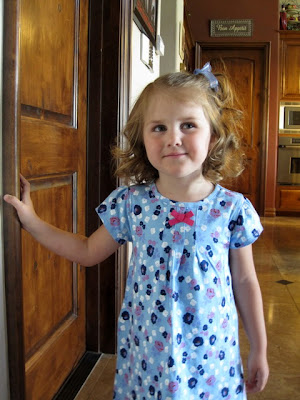 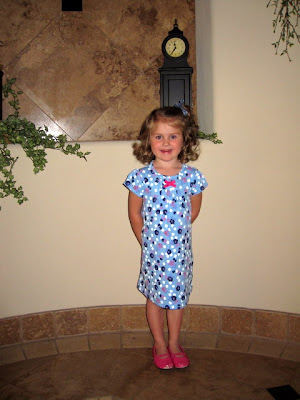 Church was nice; we only went to sacrament meeting so that we could get on the road earlier than 4:00 in the afternoon and I was actually able to pay attention for once because there were so many other people to entertain the girls. I can even tell you what the speakers talked about: personal revelation and building a Christ-centered home. Amazing, I know.

In the middle of the last talk, Miriam banged her chin on the pew in front of us and started hyperventilating. I quickly grabbed her from Grandma and started sprinting out of the chapel, hoping to make it out the door before she caught her breath and started howling. She got one good scream in before I made it through the doors and we spent a good long while pacing the hall and getting drinks from the fountain before she calmed down. She bit her tongue so hard it was bleeding so the freak-out was warranted, I suppose.

Later, after sacrament meeting was over and just as we were about to leave, Rachel knocked her head on a pew and had a crying fit, as well.

It was a good Sunday.

After packing up the van we headed off to Uncle John and Aunt Therena's house. They live in Pheonix, about an hour away from Mesa. It was there that we met Pokey the Tortoise. John and Therena have an entire menagerie! I mean, I knew about the dog, but I didn't know about the tortoise, the parrot, the two cats, and the tanks full of fish!

My girls are rather timid around animals, so the dog had to be put away soon after we got there. It was jumping and barking and running around in circles sniffing everybody and getting all excited. And terrifying my children.

The funny thing is that they acted the exact same way with the tortoise: they were terrified of it! 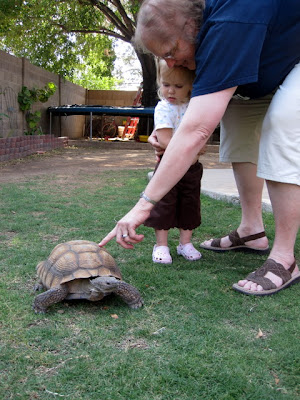 They were screaming and running away from it and then they'd turn around and notice that the tortoise wasn't the least bit interested in them, so they'd get a little closer and then he'd wiggle his left toe, and they'd run off to hide behind a pair of grown-up's legs. It was ridiculous, but eventually they warmed up to him. 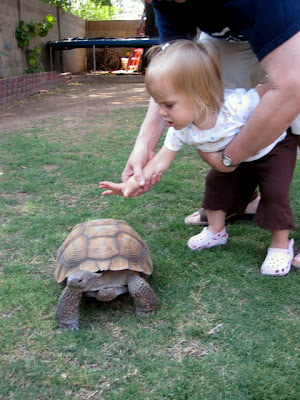 Miriam touched it first, even though they're about the same size (approx. 20 lbs.), and then Rachel decided that, if Miriam could do it, she could do it, too. Pokey is an old tortoise—he's older than me! He was at least ten years old when they got him...seventeen years ago...making him at least 27! 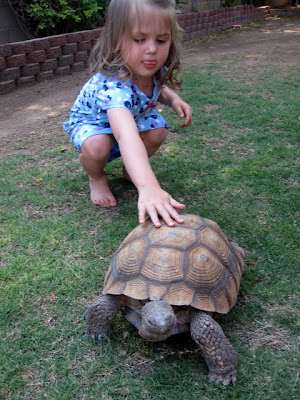 Aunt Therena brought out some lettuce for Pokey so that the girls could watch him eat. It was quite fascinating, really. He doesn't have any teeth but he bites hard enough to draw blood if your finger is in the way of his choppers. 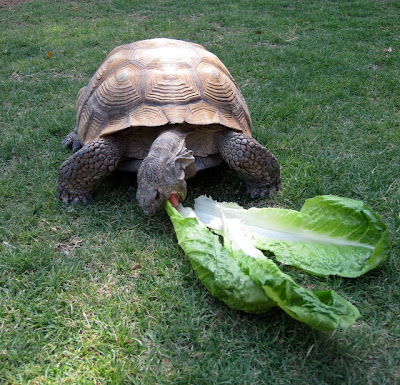 This is Miriam saying, "Bite!": 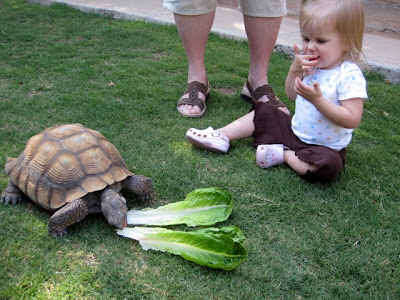 This is Miriam stealing a leaf of lettuce from poor Pokey: 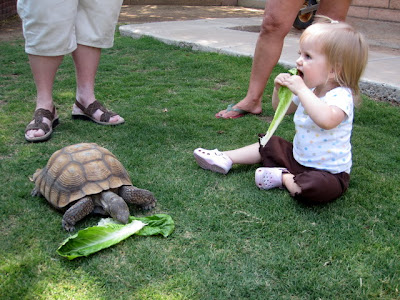 This is Miriam watching forlornly as Grandma hand-feeds Pokey: 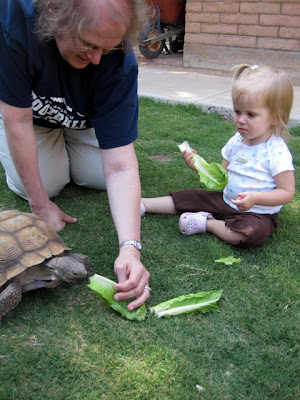 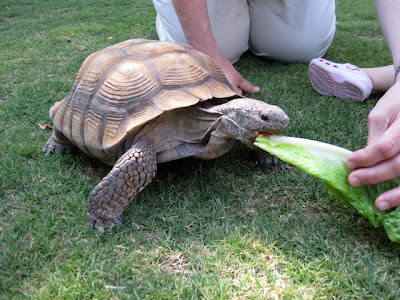 And this is Grandma being conned into hand-feeding Miriam as well: 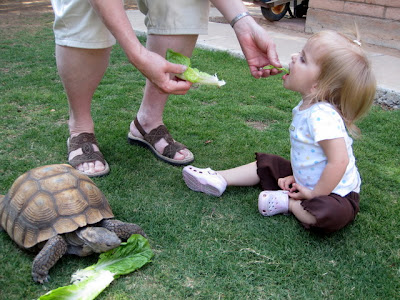 This is Miriam poking at Pokey and storing the lettuce she chewed to a pulp in her cheek because she hates lettuce and refuses to swallow it and only took it because she was jealous of the tortoise: 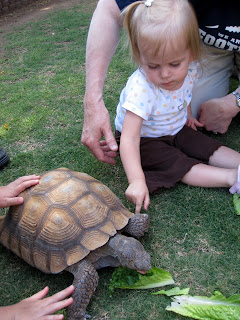 She later spat it out. And then Pokey ate it because he likes lettuce that much.
Aunt Therena showed us how to tell if a desert tortoise is male or female. Pokey is male because the underside of his shell is concave. Females have flat undersides. 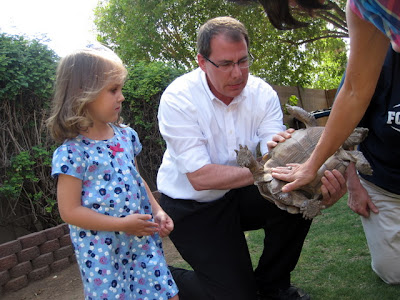 While we were enjoying Pokey, Ashley and her family showed up. 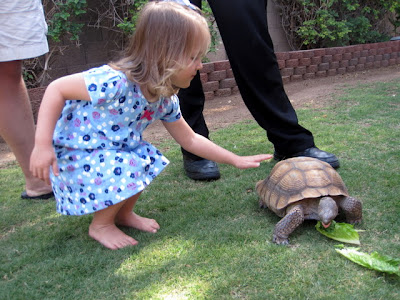 Reid excused our rude behavior by explaining that we were having a "tortoise moment"—this was the first time the girls had been exposed to such an animal in such a free environment and it was, apparently, loads more exciting than visiting with family. 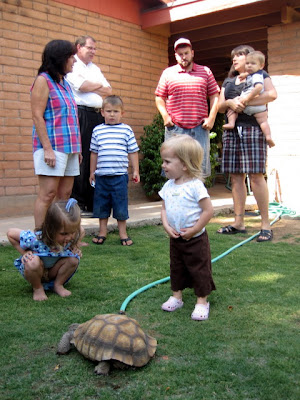 Eventually, though, the tortoise got boring (because, really, how much does a tortoise actually do?) and the girls visited with their other second cousins, Adrien and Ethan, for a while. It was a nice little pit stop.
Before we loaded back in the van, we all used the washroom. While we were in there, Rachel asked why Aunt Therena had so many animals.
"Well, I guess she must like animals," I answered.
"I don't like animals," said Rachel. "They make too much noise. Except for beavers. Beavers are pretty quiet. Maybe we should get a beaver."
What I said was, "Oh, yeah? Hmmm...maybe..."
What I thought was, A beaver?! Why a beaver?
Children can be so random...
Posted by Nancy at 2:29 AM