You can't tell from the pictures we took (because we didn't take any) but today was wonderfully hot (not too hot but hot enough to warm the pool up quite a bit) and we spent hours by the pool. We didn't venture outside until after lunch, but then we spent a good solid five hours swimming. It was fabulous. 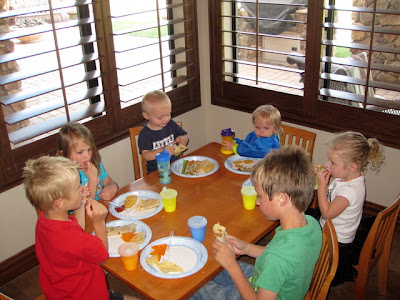 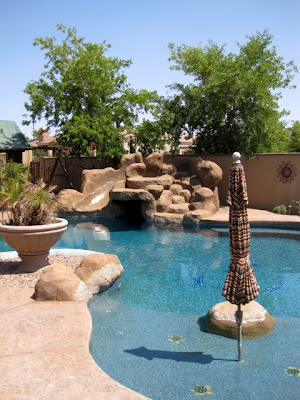 At one point, Rachel was playing in the shallow end of the pool and I was sitting in a chair on the deck. She was chasing after a toy frog that was floating out to the deep end when I saw impending doom...
"Rachel!" I yelled, trying to get her attention before she fell off the shallow shelf and into the deep end.
Alas, she ignored me, as per the usual, and in one second went from waist-deep water to water well over her head. I leaped off my chair, threw off my towel, ran into the water, and hoisted her up to safety. She had already managed to turn around so she was facing the shallow end and she was desperately trying to "swim" back by herself.
I sat and held her on the deck for a while and she said, "Mommy, I was trying to get back to the shallow part—I was swimming! But the water was pulling on my pants...and pulling on my feet...and pulling on my legs...and I just couldn't do it."
I told her that she did a good job; she was hardly even scared, though she did ask if she could get out of the pool. I told her absolutely not and then I swam with her for a while longer to make sure she ended her experience having fun. We went back into the deep end together and splashed around in the shallow end and she seemed to be able to relax and have a good time so hopefully the experience didn't scar her too badly.
We ended the day with a trip to the temple visitors' center. It was a little late in the day and Miriam was a little out of sorts (she was a little upset that I told her she couldn't go swimming in the reflection pool and decided to lie facedown on the pavement and scream) so there aren't many pictures of her, but we did manage to get one good picture of the three girls in front of the Mesa temple. 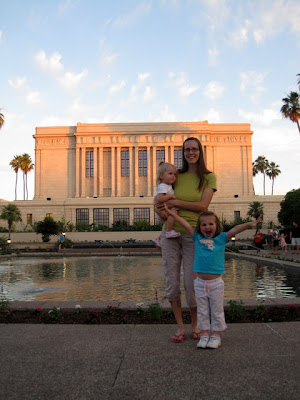 Rachel then took over as photographer and took a few good pictures of me and Andrew. She's getting pretty good with the camera! 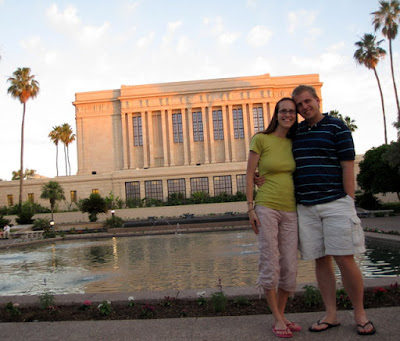 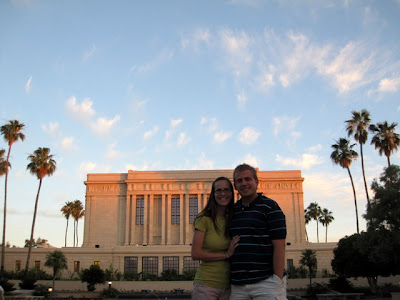 Inside the visitors' center our favourite parts were the Christus statue and the art exhibit of Walter Rane's paintings. (Rachel helped herself to the drinking fountain; she's just about tall enough, but not quite...can you tell?) 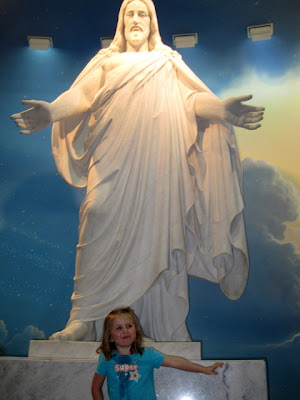 I had never heard of Walter Rane before but after looking him up online I recognized some of his work (this one, specifically). He began painting "scriptural themes" in the late 1990s and this particular exhibit was of his Book of Mormon paintings, many, if not most (or even all), of which I had never seen. We walked around the room, recounting the stories depicted in the paintings to Rachel and Miriam, and listening to the hymns they had playing quietly in the background.
When we finished with that we went back outside to do one last walk around the temple. By then the sun had finished setting and it was definitely time to call it a day. 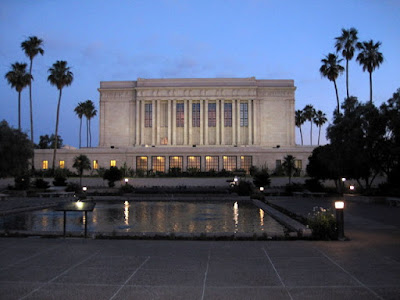 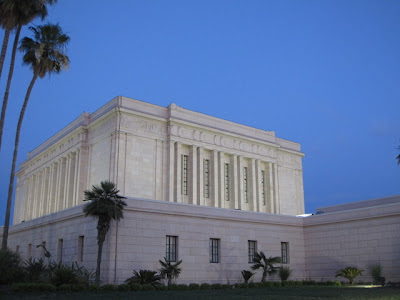 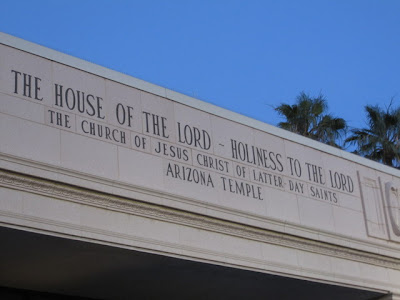 We were lucky enough to see a bride and a groom come out of the temple after being wed and sealed for time and all eternity. We also got to see a family that had just been sealed together: a father, a mother, and three children. 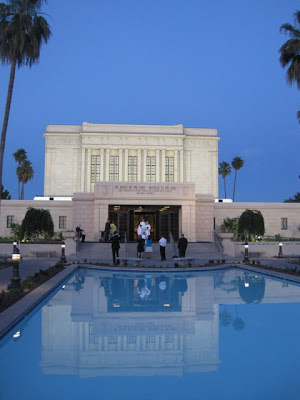 On the way back to Uncle Rulon's house we talked about the special feeling Rachel had on the temple grounds. We told her that was the Holy Ghost speaking to her, telling her that the Book of Mormon is true and that temple sealings are an important part of Heavenly Father's plan for us. We told her that our home is supposed to make us feel the same way; we're supposed to invite the spirit of the Lord into our home so that we always feel that same "warm and fuzzy" feeling inside...but when we are disobedient, throw fits, and yell at our parents then we can't feel that spirit. Instead we feel cold and angry inside.
So far I'm not sure if that lesson has helped her to throw fewer fits, but at least I know that she got to feel and recognize the spirit at least for a minute.
Posted by Nancy at 1:45 AM