Rather than wake up super early in time for 9 AM church, we decided to sleep in (ahhh…) and attend at 11 AM at the stake center at the temple compound. Our original plan was to go to all three hours of church and then meet with any members who either had a vocational or technical (VOTEC) degree or were interested in getting a PEF loan to complete their tertiary education. We were going to ask the bishop to make an announcement during sacrament meeting so we could have lots of people to interview.

We got to church 20 minutes early so we could arrange all the details with the bishop, but to our surprise, the ward was already all gathered in the chapel. They were halfway through the Saturday afternoon session of the most recent General Conference, which they apparently missed when it was broadcast a month ago. This presented a big problem for our PEF/VOTEC research—they weren’t going to have sacrament meeting or normal church, and we didn’t even know if the bishop or any other leader was there to help us organize everything. Eek.

We sat down and started watching with the Ghanaians. I assumed everyone would go home, or at least have a long break before starting another conference session, but as soon as the session ended, what turned out to be the bishop stood up and announced that there would be a 5 minute break before they started the Sunday Morning session. Dr. Agle, finally knowing that he was the bishop, went up and started coordinating with him so that we could have our PEF/VOTEC interviews after conference, which was reassuring, given the fact that our plans had already been shattered by the fact that they weren’t really having church today.

While I did pay attention to the last few talks of the Saturday Afternoon session, I (and pretty much everyone on my row) completely conked out for almost the entire two hours of Sunday Morning. The chapel had no air conditioning, the fans were on low speed and were too high up near the tall ceiling, and there was no breeze coming in the open windows—it was incredibly hot and absolutely miserable. I think I fell asleep not just because I was tired, but because it was my body’s way of trying to stay alive :)

As soon as conference was over, I ran out of the room into the less stuffy, but equally as hot, cultural center to start organizing willing Ghanaian members into small interview groups. We spent the next hour and half talking with dozens of members and finally conducting our research, which was thrilling given the fact that for the past 6 days we haven’t been able to do anything for the project, which is one of the main reasons we’re here in the first place. It was nice to finally start the actual project. 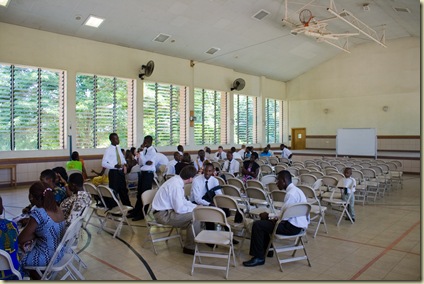 After we finished the interviews, the rest of the day was completely open and set aside for rest, research, and relaxation (finally, an actual “day of rest” Sabbath!). On our way back to the hotel we stopped by our bus driver, Oliver’s, home—a little one room shack in one of the pseudo-slums of Accra. Again, this crazy poverty still blows my mind.

We also stopped by a guesthouse owned by an American couple who were mission presidents in Ghana a few years ago, named the Alma House, which was built to accommodate visiting LDS members working in Ghana (and the general public too). It was recently renovated and expanded, so we went and visited it to see if it would be comfortable to use for future MPA visits. It’s actually incredibly well-furnished and quiet and would be a fantastic home base for future study abroad programs. I wish we were there now, actually.

We’re currently staying at the Shangri-La, an oddly named 5-star (?) resort on the outskirts of the city. The hotel is nice enough—it has a giant pool and cool bungalow style rooms—but it’s really, really shady. Students have come across drug dealers and prostitutes, and most of the guests are European, Asian, and American businessmen and tourists who rarely leave the hotel and likely take them up on their offers. The hotel actually reminds me of what colonial-era Africa was probably like in the 1920s or 30s—European overlords lounging in extravagant hotels or villas, rarely leaving to visit their “subjects” in the outside world.

I wish we weren’t so isolated here in the hotel, or even isolated in our little tour bus. One of my least favorite things about traveling anywhere in the world (Europe, Middle East, now Subsaharan Africa) is going in large groups of people in a tour bus—you miss out on so much when you’re so far removed. Figuring out the taxi or microbus system (in the case of the Middle East and probably here) or the trains and buses (in the case of Europe) is one of my favorite parts of traveling—tour buses take that away completely. The first time we visited Luxor in 2006 was neat and all, but we hated the city. The second and third times in 2008 and 2009 were far better and more authentic—I felt far more oriented in the city and understood better how the city and culture worked. (Although Luxor might be a bad example, because even though we were in the quotidian rut of things, taking microbuses around and not being a part of a huge tour group, I still hate the city. It’s so fake and geared towards ripping off busloads of tourists that it’s a total mess. But, the point still stands…) That’s why Nancy and I swore off tour bus groups 5 years ago—they’re less fun or authentic. And now I’m on one :).

And it is a ton of fun… don’t get me wrong. I’ve just had a harder and longer time getting adjusted to Ghana, probably because I’m so far removed from what’s actually going on. I’m one of those aloof residents of the Shangri-La hotel, looking at the country from my protected compound. The next time I come to sub-Saharan Africa, I won’t be on a tour bus—I’ll be riding taxis and microbuses (called Tro Troes here) and staying in much more reasonable hotels or lodging.