Arizona does not observe daylight savings and so even though they're right underneath Utah they're an hour behind Utah. That means that my dear children were suffering from a mild case of van lag—Rachel decided to wake up at 6:30 in the morning.
The upside was that I was able to work for a while before anyone else in the house was even awake. The downside was that I was on vacation and was up working before anyone else in the house was even awake.
Fortunately, Aunt Marci babysits Barrett during the day and he was due to arrive at 7:30. Barrett is Andrew's cousin Therena's son. He turned four today, I believe, so he's just a couple of months older than Rachel. They met for the first time at the family reunion in October and were best buds; the minute they saw each other they picked up where they left off in October (ie. best buds).
Unfortunately, Barrett had to leave for preschool about an hour after he arrived.
Fortunately, Cyndle and Sterling, the children of Andrew's cousin Bethany, showed up soon after he left, this time providing playmates for both Rachel and Miriam. Rachel is two months older than Cyndle and Sterling is about six months older than Miriam. They had a grand old time.
They rode the "Ranger," a dune buggy of sorts (maybe; I don't actually know what it is...) with Uncle Rulon... 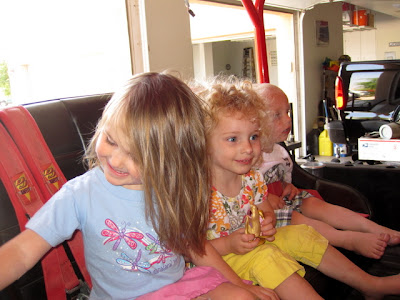 They played with the marble shoot that Grandpa Anderson made. He made one for each of his kids so Grandma has one at our house, too. The kids love playing with it! 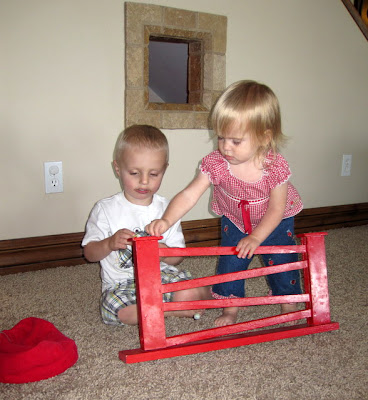 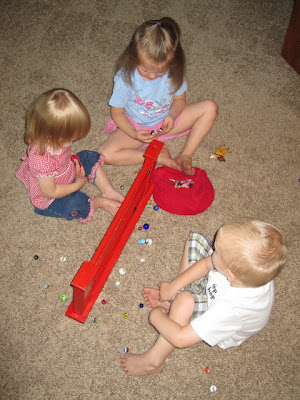 We went out back and played on the swings, climbed a tortoise statue, jumped on the trampoline, and played in the sprinklers... 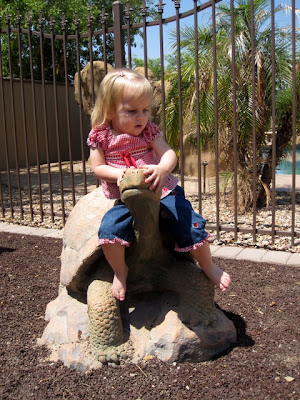 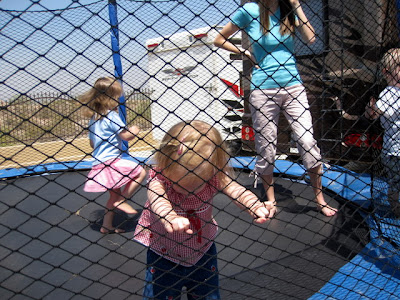 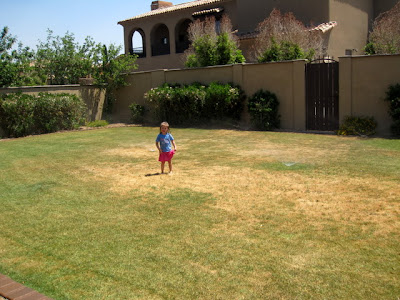 And then since we (ie. just Rachel) were all wet we decided to just get into our swim suits and enjoy the pool.

Unfortunately, the pool isn't heated so it was a bit chilly.

Fortunately, none of the children seemed to mind and they played and splashed to their hearts' delight. Miriam only slipped and went under a handful of times and recovered brilliantly each time.

Barrett was driving around the putting green (it's astroturf) on a wiggle car and Rachel decided that she would hitch a ride. 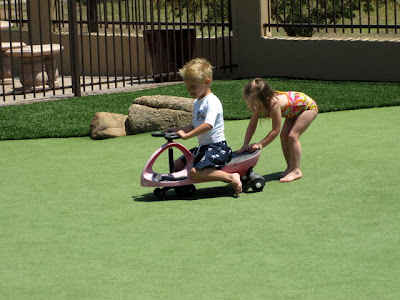 She fell off, though, and the look on her face is priceless! 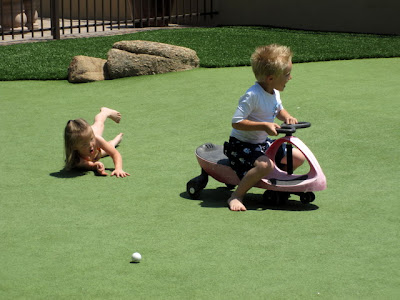 Barrett spun the girls around on one of the lawn chairs until they were beyond dizzy. 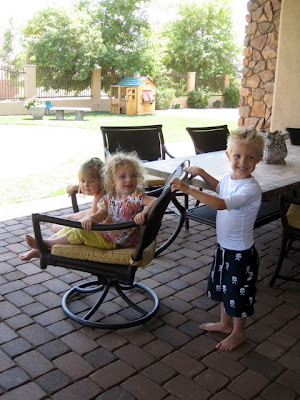 Mostly we just let them behave like hooligans in the backyard unsupervised (unless the pool gate was unlocked) and they shared many adventures together. They played so nicely together, with the exception of a few hiccups, the funniest of which was when Cyndle ran into the house crying.
"What's wrong?" asked Bethany.
"Barrett says I can't be his cousin anymore because he has a new cousin!"
"That's ridiculous—you can't un-cousin your cousin! You're all cousins. Now, go back outside and play."
That was the last we heard of anyone un-cousin-ing anyone else, so I suppose Cyndle set the record straight. Technically, though, if anyone in their trio of three-year-olds was the un-cousin it was Rachel since Cyndle and Barrett are first cousins and Rachel is their second cousin.
We loved hanging out by the pool. I told Andrew that we could move to Arizona and we wouldn't even have to buy a house; we could just buy a pool and our children would be satisfied. 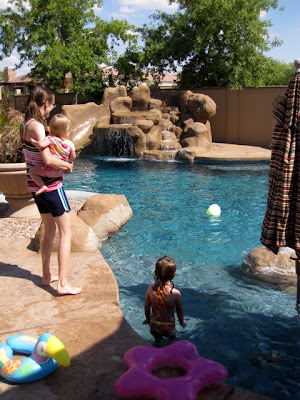 Miriam has this thing for ducks and there was an oversized rubber duck in the toy box. She hoarded it. 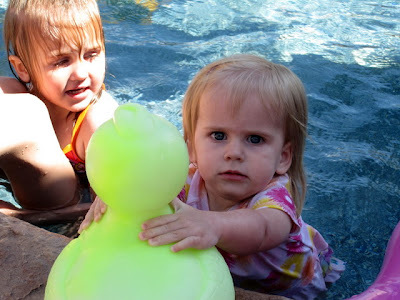 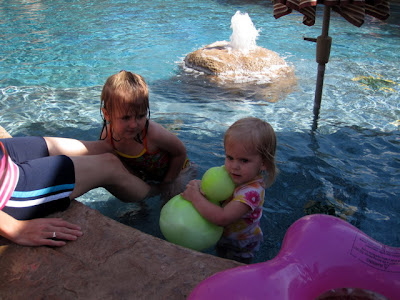 I love this picture of all the "big" cousins hanging out on the deck to get warm. 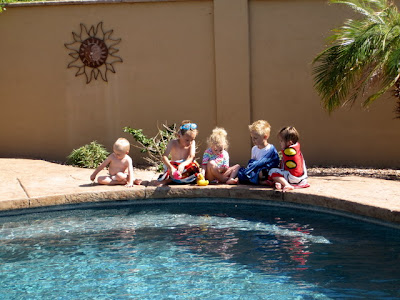 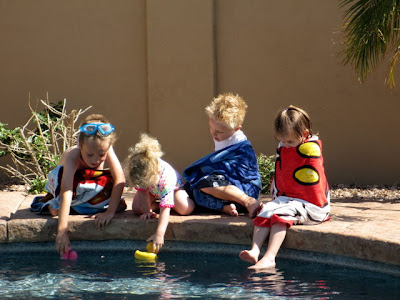 Miriam wasn't allowed to hang out on the deck by herself. Or with the "big" cousins. She had to hang out with me. 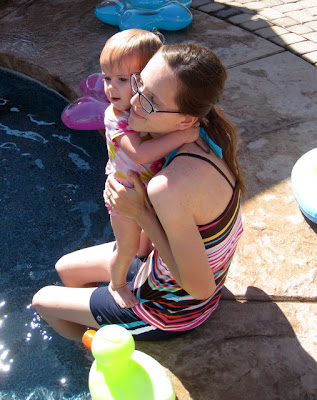 When everyone was sick of the pool, we moved inside to play for a little while. Rachel and Miriam were staying in the "grandkid" room, which has bunk beds and is packed full of toys. Miriam found a "pretty hat" in the dress ups. 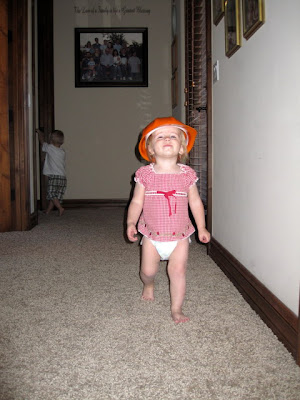 I didn't have the heart to tell her it was only a hard hat and instead told her that she looked beautiful and asked her to smile for the camera. She's getting really good at hamming it up... 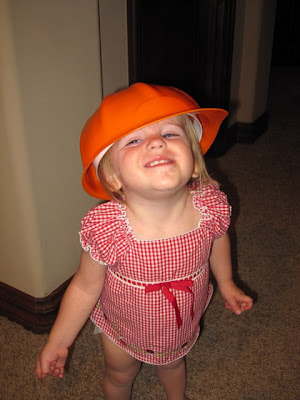 We went to Aunt Susan and Uncle Morris's house for dinner. They have a pool as well. It's smaller, but they heat it so it was so nice to swim in. Rachel got brave enough to swim (ie. flounder) between me and Andrew and Andrew had a massive water fight with Grandpa. I'm not sure how you tell who the winner of the water fight is when you're playing in a pool and dive under the water to hide from your foe, but they had a good time. 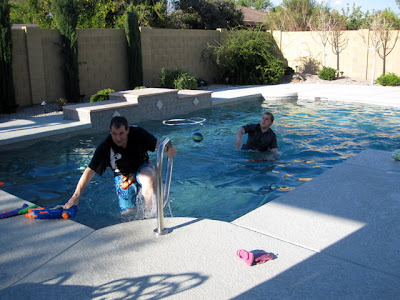 The girls went to bed remarkably well, if I remember, which well they should have from all the playing they did during the day.
Posted by Nancy at 11:40 PM