Due to her behavior last night...and this morning...and early this afternoon...Rachel was banned from friends, television, candy, and, according to her, "anything that's fun in the house." She's a little melodramatic, though, so you can rest assured that she was not banned from doing anything that's fun. She just felt that she was. For a while she didn't know what to do with herself and asked me to come up with a craft for her to do.
Ordinarily this wouldn't have been a problem but I was trying to work and Miriam was awake and the idea of getting out glue and scissors and other such things while trying to finish working and keeping the baby entertained (read: out of the glue and away from the scissors) was a little too much for me.
"I don't know if I can think up a craft idea right now," I said to Rachel.
"Yes, you can, Mommy! I know you can because you have a brain!"
Yes, child, as do you.
Instead of managing craft timet I got the girls settled down with a colouring book and some crayons. Rachel helped Miriam "learn" her colours—she now knows pink, blue, and purple, which means we could teach her the complex idea that (blue + pink = purple). That might be asking a bit much considering she doesn't even know green from yellow or orange from black.
Anyway, after Miriam went down for her nap and I had finished getting in half of the time I needed to at work, I took Rachel outside with me to move the recycling from the bin in the garage into the big recycling can so that we can move it into the street for pick up tomorrow. Usually this is Daddy's job but since he's in Ghana (and it's warm) we did it for him. While we were doing so we found some egg cartons and decided we would reuse them instead of recycling them.
We turned them into caterpillars and Rachel's been happily playing with them ever since. 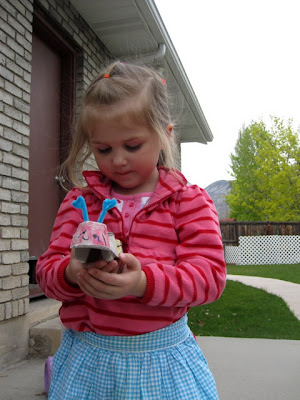 Who would have guessed that a face so full of love and tenderness could turn into a burning ball of fury in two seconds flat? Here's hoping this loving, tender side is around to stay for a while... 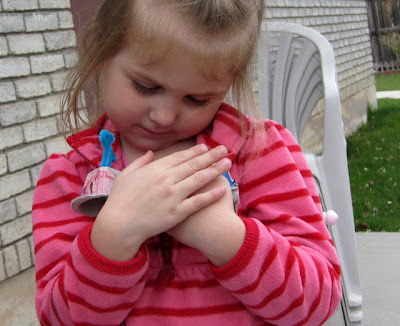 Also, who would have guessed that garbage could make a child so happy? 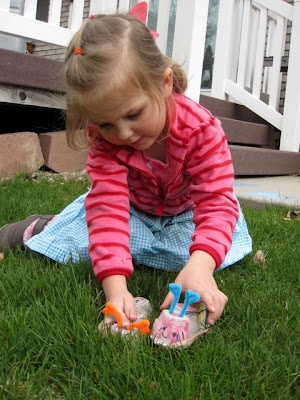 I know she's having a hard time with Daddy away because she drew a smiley face on one of her caterpillars and then decided the caterpillar needed tears on her face as well "because she is sad that my daddy is gone at Ghana." That might explain some of her behavior issues, but seriously...she's like Little Miss Polar Opposites. Happy, sad. Good, bad.
I'm sure you've heard the poem by Henry Wadsworth Longfellow:
There was a little girl,
Who had a little curl,
Right in the middle of her forehead.
When she was good,
She was very good indeed,
But when she was bad she was horrid.
Longfellow is just lucky he was born before me because if he hadn't been it's very likely I would have penned those lines myself. That's my girl, miya b'miya, 100%. 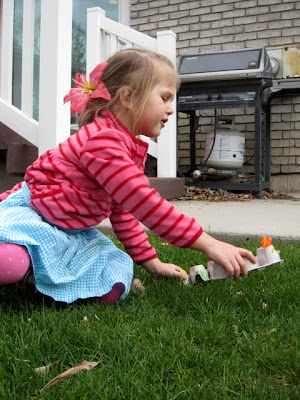 Oh, an in case you're wondering what she's wearing, she's wearing boots with leggings and a t-shirt with a fleece jacket on top. This is accessorized with an apron and a fake flower. And this is very tame compared to the outfit she wore yesterday. Whatever floats your boat, I guess. 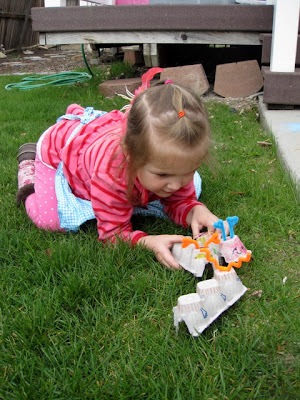