Before I left for Russia I met a sweet Russian girl named Alla. She had recently moved to Utah from Russia to study English at BYU and she wanted to send a package home to her parents. Since I was headed to her hometown, I volunteered to take the package for her.
She was one of the sweetest girls I had ever met and completely put my mind at ease about moving halfway across the globe by myself. After all, she had just done it. She assured me it wouldn't be too cold in Voronezh since the weather there is about on par with Calgary, Alberta, and I had grown up there. She told me that her mom and dad were the kindest, sweetest couple and that they would take care of me if no one else would.
Of course, I had a host family set up for me—the family of a little boy, Alyosha, from the school where I would be teaching. They were such a young couple, though, that they said they were more like my host brother and sister and Alyosha was my host nephew. Thus it was that Tatiana became my Russian mother.
She wasn't a member of the church (yet—though both her children had already been baptized) but she would come to church almost every week. Sometimes I would sit next to her and sometimes I wouldn't but always there was a warm, motherly hug for me.
We (meaning the girls I went to Russia with) would go over to their house as often as we could for Family Home Evening. The missionaries would come to translate for us, Sergi would make oladi, Tatiana would break out her kompot, and we'd squish around their kitchen nook eating oladi, drinking compot, and having a grand old time. Then we'd head upstairs to have a lesson, being careful not to burn ourselves on the hot water pipe that doubled as a handrail.
I have some sweet, sweet memories of that home.
Tatiana would always joke that she had so many daughters, because of all the ILP volunteers who had come through her home, that she would never have to worry about having enough grandchildren. She'd be Babushka Tanya to everybody!
Well, time has passed. My dear friend, Alla, and I spent countless hours tutoring each other in either English or Russian at BYU. We both graduated and married Americans. Now we both have two children (and her brother has three) so Tatiana really is Babushka Tanya! Tatiana and Sergei were also baptized into the church not too long ago and are quite happy.
For better or worse, both of Tatiana's children now live in the States—as her son joked today, "Her family moved to the States to escape Communist Canada and Alla and I moved to the States to escape Communist Russia!"
Lucky for me, that means I don't have to go all the way to Russia to see my Russian mother! Instead I can pop on over to her son's house to pay her a visit like I did today. And what a treat that was!
Sergi made oladi and we visited just like we used to...only we didn't have the missionaries there to translate for us and instead of cherry kompot we had ice water. 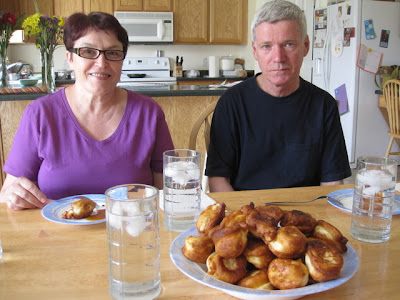 Tatiana's son helped translate for a little while but he had to run his daughter to the doctor so then I was left on my own. Tatiana is amazingly patient, though! We were able to get in a bit of a conversation. I must say my conversation skills have deteriorated since I graduated from BYU. I can read fairly well still—I use a Russian hymnal at church—and writing, although it's a bit more of a chore, is doable. When I try to actually talk, though, my brain turns to mush.
I kept saying things like, "bukra" instead of "zaftra" for "tomorrow," and at one point blurted out, "Inshallah!" and then fumbled for how to say "I hope so!" in Russian. But, like I said, Tatiana is the epitome of patience and helped me work through all my stammering gibberish.
The girls weren't too sure about her until she started handing out treats—then suddenly being in her arms didn't seem quite as scary anymore! 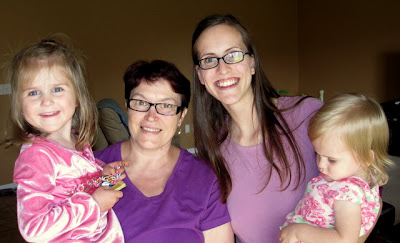 She asked if I remembered the treats—I don't think the wrappings have changed one bit in the past seven years! And I think I actually still have one of the Alyonka chocolates in a box somewhere. It could be a clone of the one Tatiana handed us today! 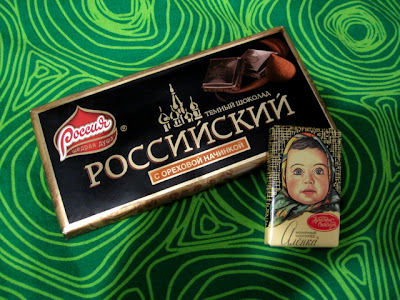 I loved seeing Tatiana today, but it made me so homesick for Russia. Even though it's cold, I'd go back in a heartbeat!
Posted by Nancy at 1:47 AM

Email ThisBlogThis!Share to TwitterShare to FacebookShare to Pinterest
Labels: Russia