Although we’re staying in an incredible beach resort, the whole point of this trip is to do actual work and research—we’re not playing all the time. This morning we woke up early and drove an hour east along the coast to the city of Takoradi, where we did some research for both of the projects we’re working on.

We first picked up a former bishop and current head of the Takoradi stake (or region?) Employment Resource Center, Bishop Adjei, who was to be our guide and navigator for the day, along with six young single adults who would translate for us.

Bishop Adjei had planned four VOTEC school visits for us in the morning. We had hoped to meet with just the admissions offices of tertiary VOTEC schools, but the first school kind of shot that plan to pieces. We showed up at a secondary (high school-esque) school, where the administrators decided to give us a full tour of the campus before having us meet with department heads, teachers, and students—way more involved than we were hoping. The tour dragged on forever, and despite mine and Dr. Agle’s efforts to make it more productive or cut it early, we spent over an hour in the hot sun watching students mix concrete and do electrical wiring stuff.

When it finally came time to have our meetings, we divided the group in two—half would meet with students and half would meet with the department heads and administrators. As I walked to the area where we were supposed to meet with the students, I realized that the school had totally misunderstood what we wanted. We were led to a pavilion full of 70–80 students, who were mostly sitting and listening to a live band. At the front of the pavilion was a table with a lacy tablecloth and a row of seats—seats reserved for us. Apparently they wanted to make a panel discussion or something out of our visit.

We convinced our administrator/guide that we really only wanted to talk to 10ish students, so we chose a small group of students at random and peeled them off from the rest of their peers. As we interviewed them (with totally made up questions, since we had never planned on talking with non-LDS current VOTEC students for this project), their friends came and surrounded us. We had divided ourselves into 5 groups, each interviewing 2–3 students. As Rachel and I talked with our two, our audience quickly grew from 2 to 30—many of whom kept interjecting stuff throughout the interview. And the band never stopped playing—the loss of their audience made them play even louder, which forced us (and our groupies) to move away from the pavilion and into the sun (which made them play louder, which made us move further away).

We fortunately survived the mobs of students and regrouped back on the bus. One school visit took over an hour and half. And we still had three schools to go.

To save time, we split up into three groups. The bus drove to the next school, dropped off the first group, then drove to the second school, dropped off the second group, and then drove to the third school to drop off the third group before restarting the route and picking everyone up. The first group visited a polytechnic school (a tertiary VOTEC school! Finally!), where they were treated like royalty. An official photographer clicked away during the entire meeting and they kept getting brought water, juice, and snacks.

The second group (my group) visited a secondary school (boo…) run by a member of the Church (yay!). We spent a little bit of time talking about his school, but since we’re not really concerned with secondary schools, we spent more time talking about the PEF and the churchy aspects of our project, since the school manager is a high councilor in the Takoradi stake and is familiar with the background of our project. It ended up being a really fruitful visit, fortunately.

The third group never got to visit their school. Despite the fact that we had made an appointment, it was closed for school holidays. Oh well.

After picking everyone up from their schools, we went to have lunch. I’ve been terrified for this particular lunch since before we even landed in Ghana. A member of the Church, Sister, Mensah, owns a catering business and restaurant in Takoradi and has traditionally fed the MPA students more food than they could possibly ever eat—she literally cooks for 100 (large scale catering type stuff) for less than 20 students. And the food isn’t the bland rice, chicken, and plantains that we’ve been having at every single restaurant and hotel we’ve been to. It’s scary stuff like banku, fufu, squid, random fried and smoked fish, gizzard kebabs, and the like.

However, the lunch was far less scary than I had hoped. It was a buffet, which meant that I made it through the line with 3 different types of rice, some balls of yam something, and some fried plantains. And that’s all. Phew. Sister Mensah stood in the line and inspected our portion sizes—if we didn’t have enough, she’d scoop random stuff onto our plate. I ducked out of the line before I made it up to her, though, narrowly escaping a helping of fried squid tentacles.

Even though I didn’t get any on my plate, I did get to try some banku—a ball of fermented corn meal and cassava flour that has an incredibly sticky texture and chemical taste. It’s apparently impolite to chew banku; you pinch off a little chunk and swallow it whole. I struggled to get a little ball down—it was so gross. Fortunately we had 7 Ghanaians eating with us (Bishop Adjei and the 6 translators), all of whom love banku and its cousin fufu (same fermented stuff, only with plantains added for additional flavor)

After lunch we went to Takoradi’s main vegetable market, known as Market Circle because the entire market is circumscribed by a circular wall. Since this may be the last market we visit, I decided to finally take pictures. As we walked through the market in search of onion sellers, old ladies cursed me up and down just for having my camera out. People would yell at me for lifting the camera up to take a picture, so I took a bunch of pictures from chest height—I had the camera hanging by a neck strap, so I would point my midsection at various parts of the market and click the shutter (which was embarrassingly out and gave me away more often than not). Lots of pictures obviously didn’t work out, but I did manage to get a few that kind of highlight the chaos of the market and our interviews there. 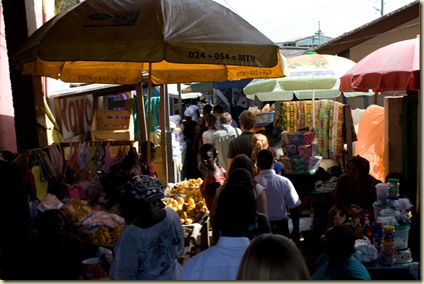 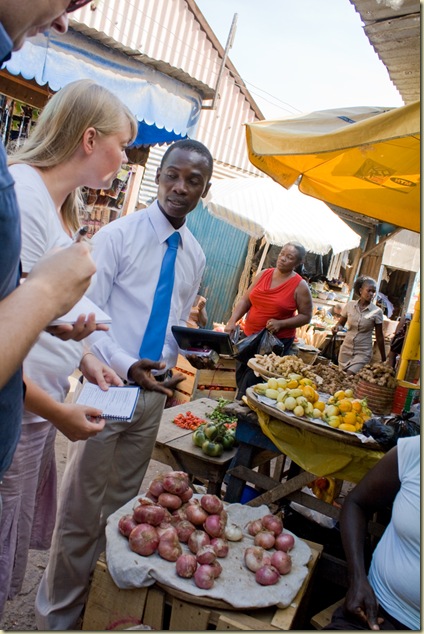 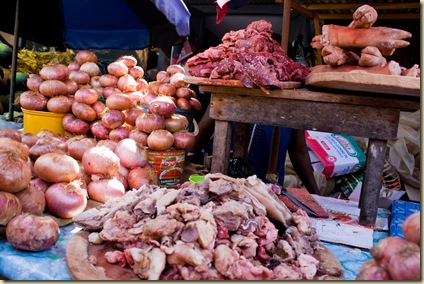 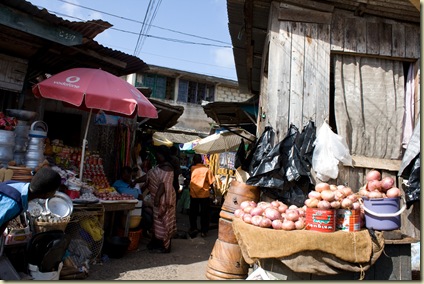 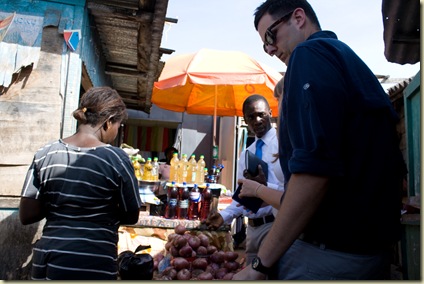 After talking with a few sellers, we decided to track down the onion queen—the boss of all onion selling. We were directed to a two story building in the center of the circle, which ended up doubling as the tax revenue collection building and police station. When we walked up to the second floor we were shocked to find every single commodity queen in the same room. The newly elected mayor of Takoradi had just convened a meeting with all the queens to introduce himself and his agenda for the city, and he let us sit in on the whole meeting. Yeah. We hit the jackpot. 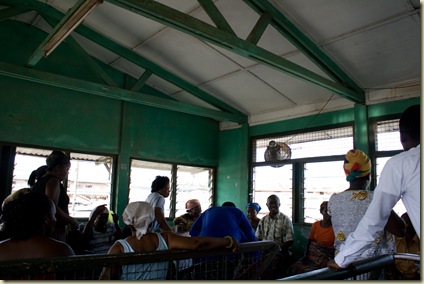 We met up with another mini-group of MPA students who were in charge of finding the head market queen (who was in the main meeting, since she’s in charge and everything). After the friendly mayor gave a brief speech explaining his agenda (better waste management systems, better tax collection, and more crackdowns on unlicensed sellers), he let our group have the floor. 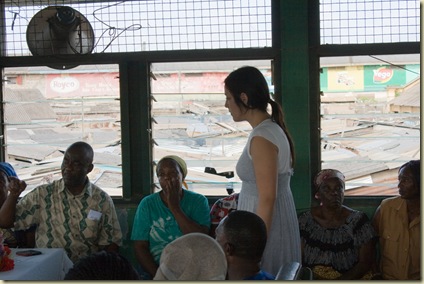 Karla, the head of the market queen mini-group gave an impromptu introductory speech to all the queens and mayor before asking them questions about their relationships with farmers. Our group found the onion queen and asked her our questions while Karla addressed the main group. 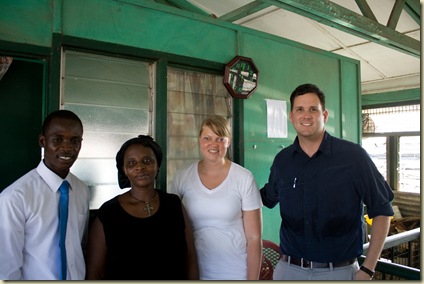 Our translator, the onion queen, Shanelle, and Sam

After the queen council, we ran back to the bus, dropped our translators off at the stake center, and headed back to our hotel in Elmina for a relaxing evening along the beach. 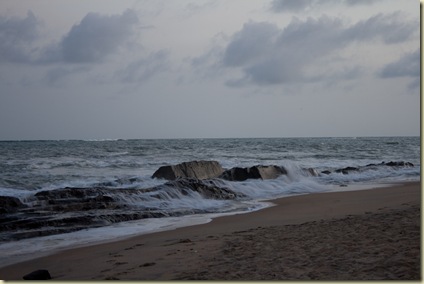 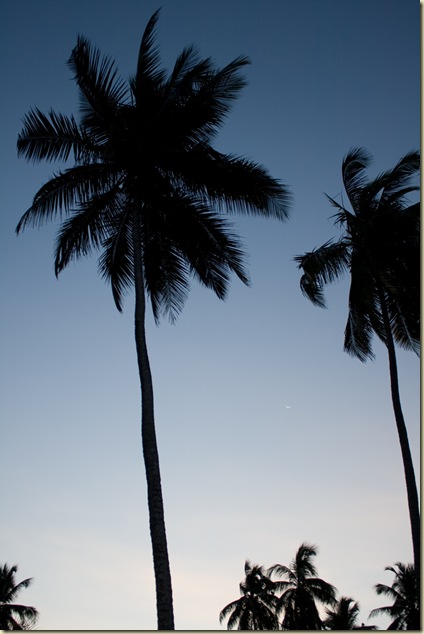 Since we had such a huge and late lunch, we all ordered dinner on our own instead of having the hotel provide a buffet for us. A bunch of us—in shock over the magnitude and scariness of lunch—ordered macaroni and cheese from the kid’s menu. It was glorious.

Even more glorious was desert: a banana split inside a pineapple. 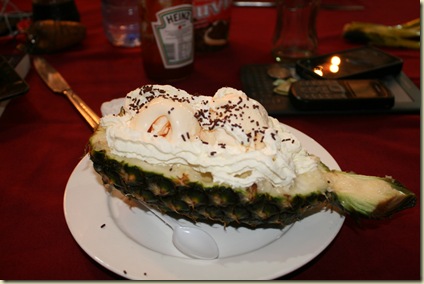 This place is so cool, fried squid legs and all.