I realize this is no where near as interesting as Andrew's current adventures in Ghana, but here I go, anyway. This evening after we Skyped with Daddy (for the first time in well over a week, yippee!) I gave the girls dinner.
We had leftovers and fresh broccoli and cauliflower with ranch dressing.
My girls love to watch Grandma get ready for the day. For some reason it's much more interesting than when I get ready for the day, probably because Grandma curls her hair (instead of throwing it into a ponytail) and puts make up on (instead of, well...not putting make up on). They find her whole routine absolutely fascinating  (I like to take the opportunity of having them entertained to work without having twenty billion demands thrown my way).
They have picked up on a few things, though. For example, Miriam has an acute fascination with "pretty eyes" and since I won't let her near mascara she's taken to dolling herself up with food.
Tonight she painted her eyelashes with ranch dressing. Isn't she soooo pretty? 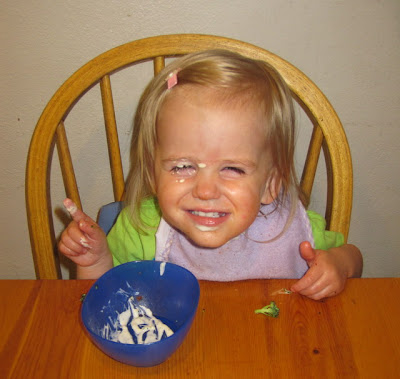 Rachel decided she was a big girl and when she ran out of ranch dressing on her plate she announced that she was going to pour it for herself. She reached across the table, snatched up the bottle, and gave herself a huge helping before I could stop her. 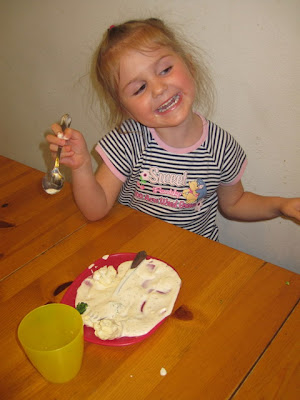 It filled her whole plate to overflowing. What is pictured there is what was left after I scooped out half a bowlful (which she will use for dipping vegetables the rest of the week). 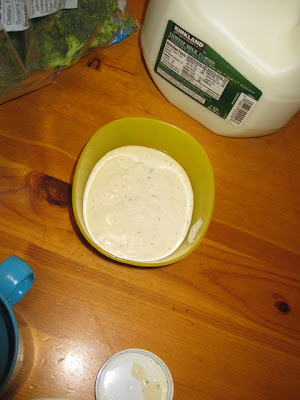 She couldn't understand what went wrong.

"I did it before!" she exclaimed when I told her that she needs to ask (and wait) for help.

The problem was that the bottle was brand new and almost completely full. It's now only about half full, in case you're wondering...
Posted by Nancy at 10:40 PM