My brothers both brought me junk food for Christmas, like good brothers should.

Patrick gave me some new Hershey's Gold bars (they're a caramel-creme base with peanuts and pretzels mixed in and they're delicious). When Patrick was explaining them to me I thought they were a chocolate bar with caramel, peanuts, and pretzels mixed in, but there's no chocolate in them at all. Thus the reason he gave me a few to try.

So I opened one and had some and then asked Andrew if he wanted to try some, and he did.

I broke off a square and put it in his mouth, folks.

He happened to be holding Zoë at the time, however, and before he could close his mouth her little hand shot up, snatched the candy and put it in her mouth.

I have never seen her move so quickly! Lightning fingers!

Andrew and I were dying of laughter, while Zoë acted like I had definitely meant to put the chocolate in her mouth in the first place. 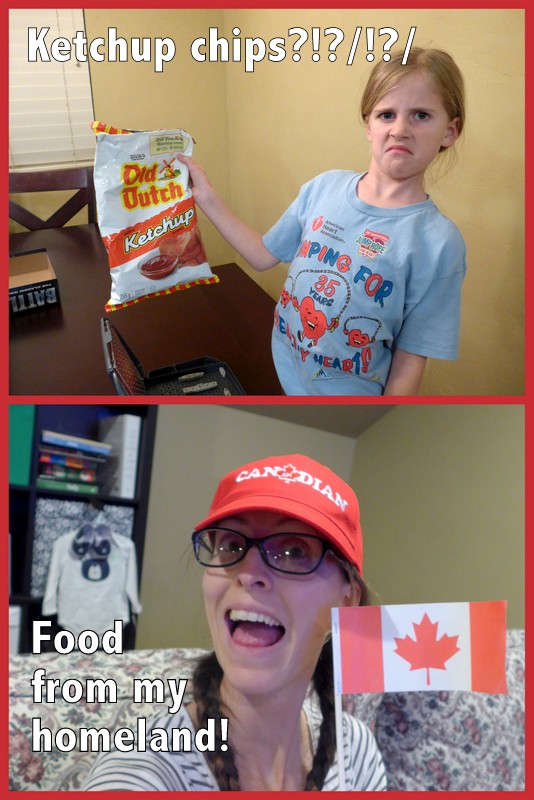 David flew down from BC, as I mentioned, and brought treats both from the UK (where he lived until he moved to Canada last month) and from Canada (where he lives now, obviously). Some were treats that my kids consider fairly normal—various chocolate bars and things. Like, he brought little packages of Smarties (real Smarties, made of chocolate, not American Smarties, which we call Rockets in Canada), but the kids have had those before.

What really got them were the chips. No one ever sent or brought us chips while we were living in NC. I guess they take up too much room in luggage/packages, even though they're fairly light weight.

So, Miriam picks up the package of ketchup chips and recoils in disgust. How is it possible that my children don't know the joy of ketchup chips?! I suppose when you're eight years old and you've lived thousands of miles away from any Canadian relatives for most of your life it can happen.

She tried them. And enjoyed them. Naturally.

Thanks for all the junk, brothers!
Posted by Nancy at 1:37 PM