Alexander's check up went well. He's now 10 lbs. 11 oz., which is quite a bit smaller than any of his sisters were at two months, but quite a bit bigger than his brother. It's hard to count Benjamin in on any sort of comparison because he was such an anomaly, but the girls were all 12+ pounds by two months. My kids tend to explode in the weight department for the first few months and then taper off. Alexander is still pretty small, but he's growing well.

I think he was 22 inches long?

I ought to go get his paperwork from the car. It's been in there since Friday.

I also talked with the doctor about Alexander's breathing, being sure to note that I wasn't overly concerned about it because I was pretty sure it was just run-of-the-mill laryngomalacia. Alexander was breathing pretty noisily during the appointment, but not goose-honking loud, so I played the doctor a video clip of him honking.

I really expected the doctor to just pat me on the head and offer some reassurance but instead he took some x-rays of Alexander's airways (his lungs/throat, I guess) to check for any obvious problems (we haven't heard back yet some I'm assuming they're clear) and referred us to a paediatric ENT.

The doctor is pretty positive it's just laryngomalacia (or perhaps bronchomalacia (same thing, just with the bronchial tubes instead of the larynx)) but there's a small chance it could be something more problematic, such as a (probably benign) tumor growing in his throat or a misplaced blood vessel growing wrong and slowly choking off his air supply. So he'd like to rule those things out.

His concern was that when he asked if his symptoms had gotten worse since birth I laughed and said, "Oh, yes! He's always been a noisy breather but it's way worse now!"

I mean, people used to laugh a little about his little baby snores but now we get people craning their necks, trying to figure out where that awful racket is coming from.

So, the ENT's office actually called today, but they called while I was out walking with three of my kids (two of them in a wagon, the other one strapped to my chest) and it was cold and I was in a hurry to get home to meet the girls after school. So, to make a long story short, I need to call them back at my convenience to make an appointment.

But do I really want to?

I don't want to run a battery of tests on him for nothing (getting him to remain remotely still for the x-ray was laughable enough) and there's like a 99% chance it is just nothing. 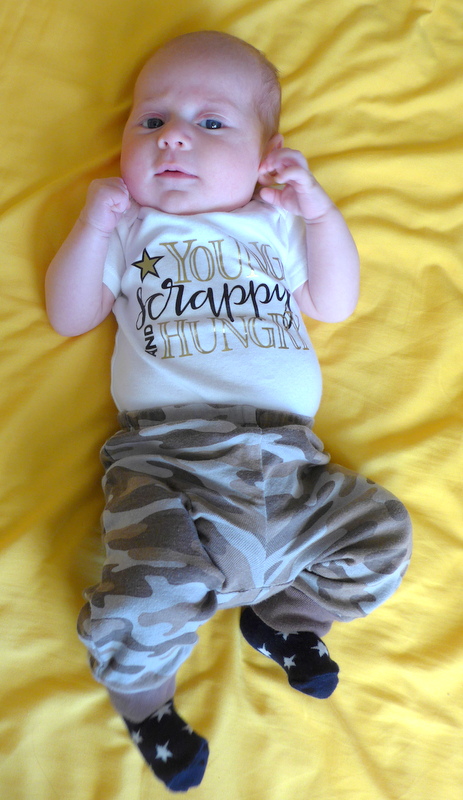 Anyway, other than that Alexander is your typical two-month-old (not that laryngomalcia is uncommon; it's actually quite the opposite). He's smiling and cooing and—since he's one of my children—he's rolling over pretty consistently. He rolled for the first time at 7.5 weeks, but probably would have rolled earlier if I ever left him on the floor, but I don't.

I carry him most of the time. I know this because in every single picture Benjamin draws of our family I am holding Alexander. It's kind of funny, really.
Posted by Nancy at 2:49 AM