I really rather like it when Christmas/Eve falls on a Sunday. Perhaps one day I will join in my family's newish tradition of attending midnight mass, but that will have to wait until I no longer have a bunch of wee ones at home because, let me tell you, Benjamin cannot do anticipation. The safest place for him was tucked into bed for the night. He was so off the wall the entire day.

But, we got to go to church, so that was nice, if you enjoy taking totally hyped up five-year-olds to church, which, uh...ahem. I actually got to miss most of his antics because I sang with the choir and we sat up on the stand the entire time. I enlisted my sister Josie to come sit with my kids because I assumed Andrew would be out in the hallway with an incredibly grumpy two-year-old for the bulk of sacrament meeting (because that's where those two usually are).

I took Alexander up on the stand with me, to eliminate him from the mix. I'm sure he was much happier sleeping soundly in my arms than he would have been sitting with his siblings, being poked, prodded, and pulled upon the entire hour.

Zoë sang Rudolph the Red-nosed Reindeer at the top of her lungs during the sacrament hymn, so that was great. And I know Andrew took her out at least once before I went up on the stand, but from what I could see the kids were actually pretty good. Perhaps it was having Auntie Josie there (she downloaded a colouring app on her phone), perhaps it was the novelty of the Book of Mormon quiet book Grandma gave the kids for Christmas, perhaps it was simply a Christmas Eve miracle. 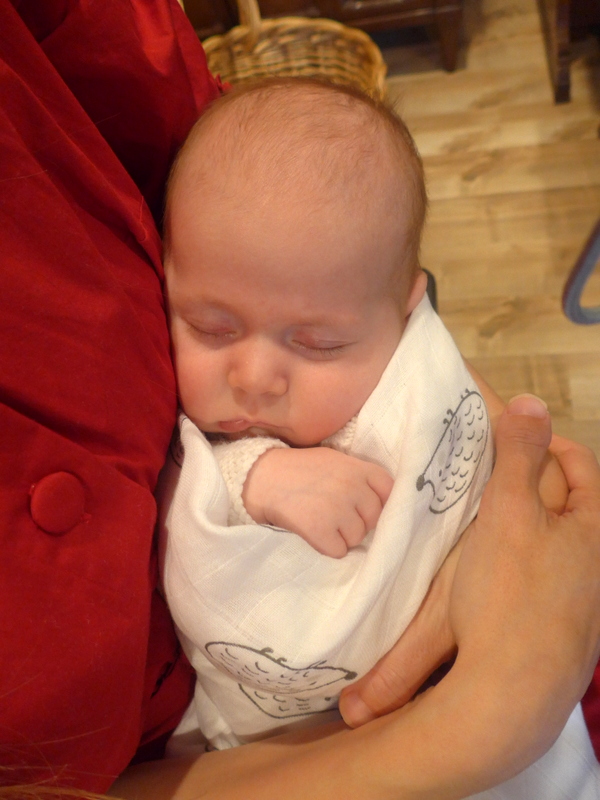 Auntie Josie took a few pictures of our family after church. I think this was the best one: 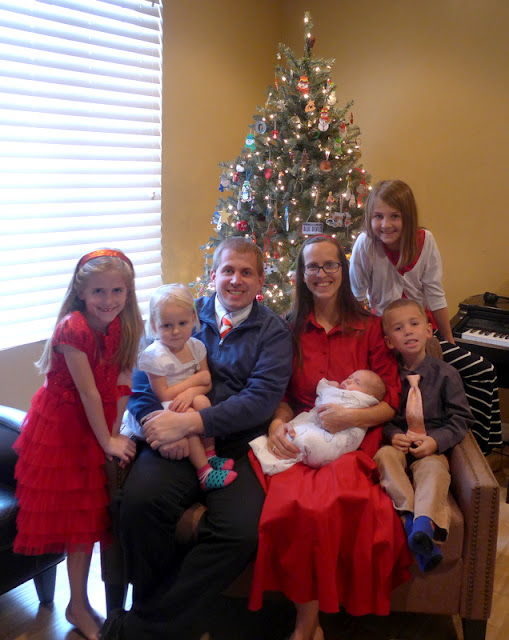 This one is necessary because...Benjamin: 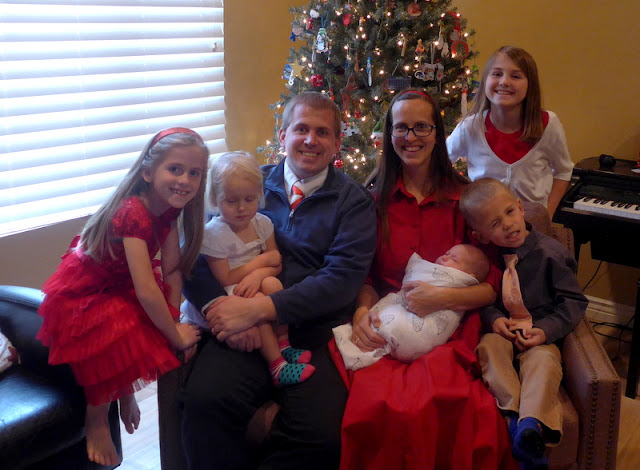 And this is one where we're all making grumpy faces in honour of Zoë who was being incredibly grumpy: 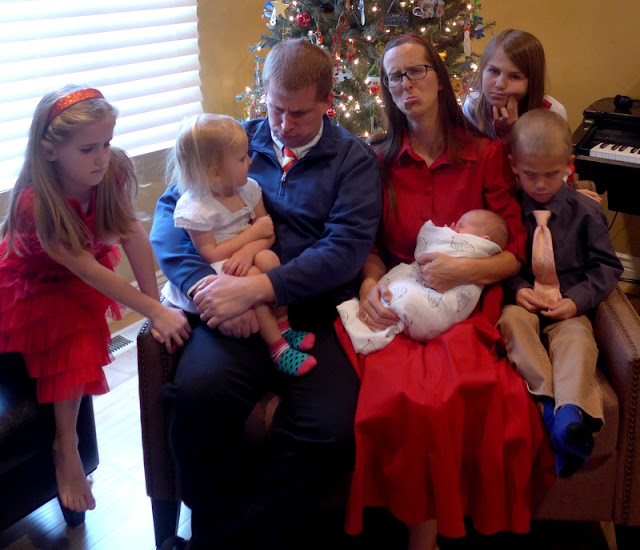 Andrew made latkes for dinner (so many latkes), along with beef stew and applesauce. It was delicious!

We finished up the evening with a reading of the Christmas story, which we acted out again, of course. 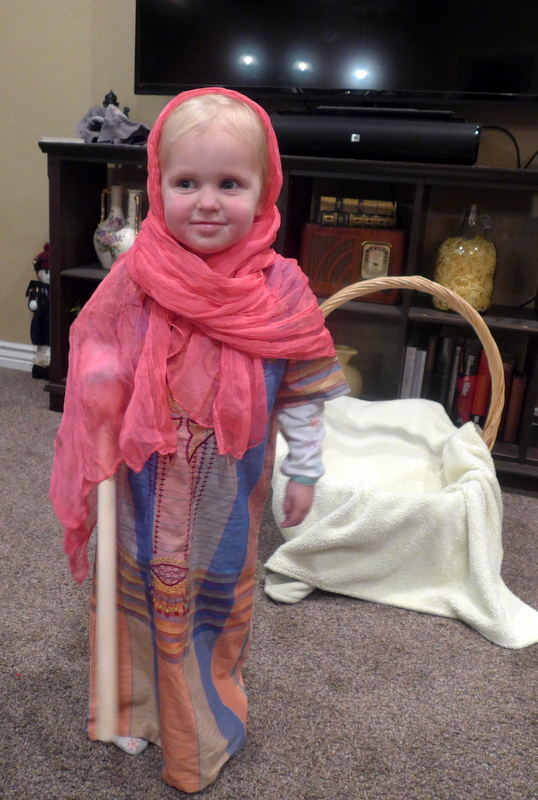 Benjamin was Joseph this time around, and I was the donkey. The journey into Bethlehem got off to a pretty rough start: 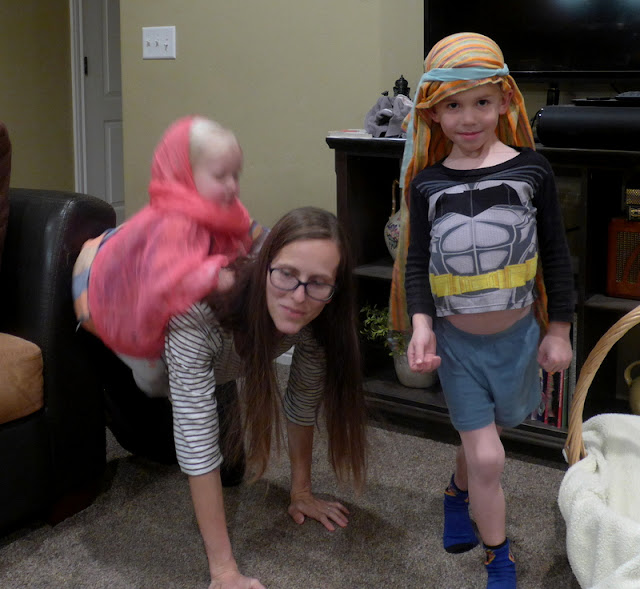 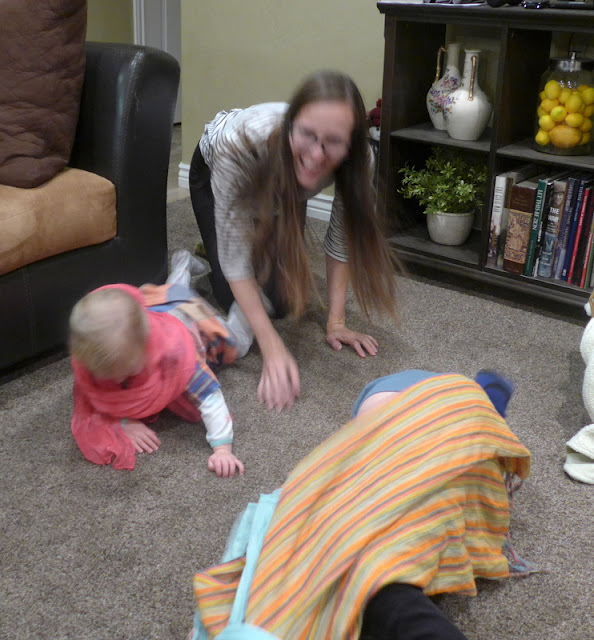 We eventually figured things out, though, and made it to the manger-side: 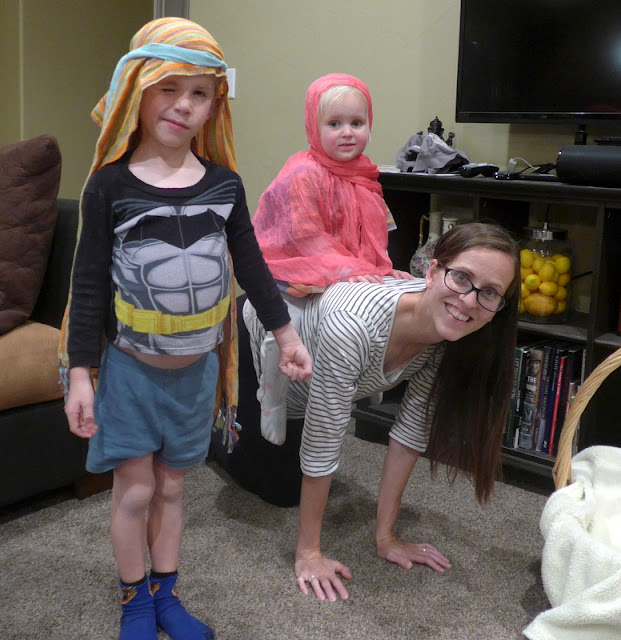 There, Mary brought forth her first-born son: 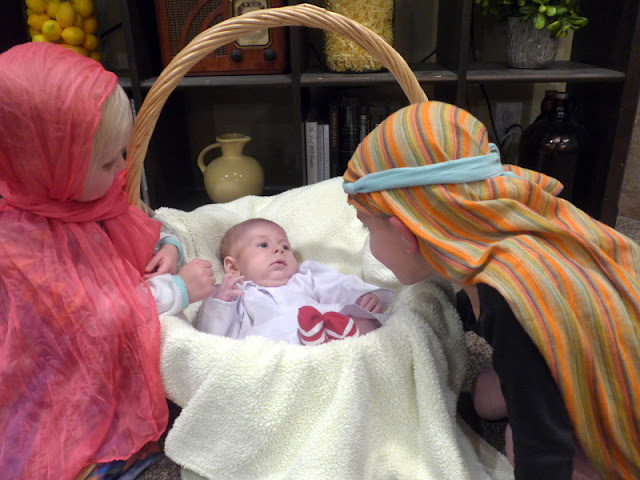 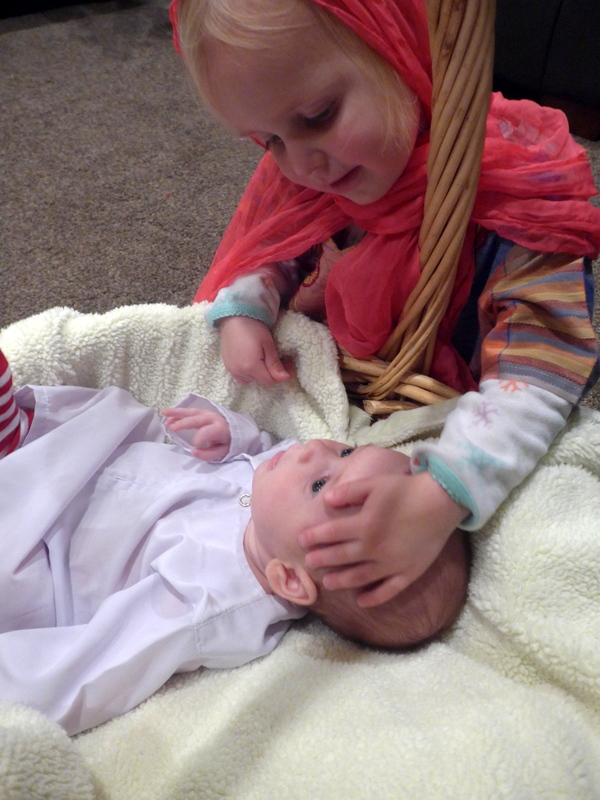 Then the Angel of the Lord (Miriam) appeared: 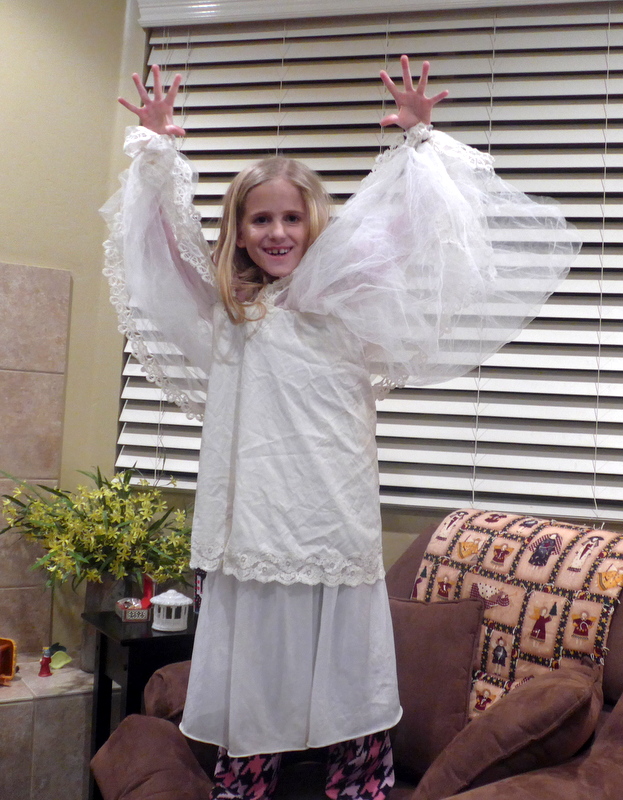 And the shepherd (Rachel) was sore afraid: 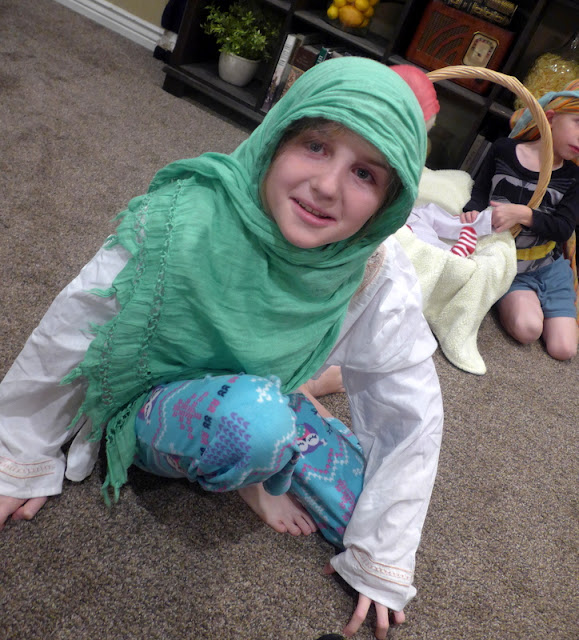 And then the angel fell off her perch and upsot the footstool. It was quite the crash landing: 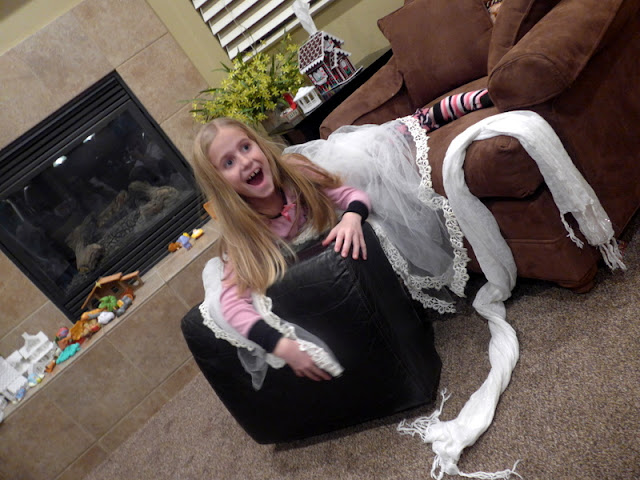 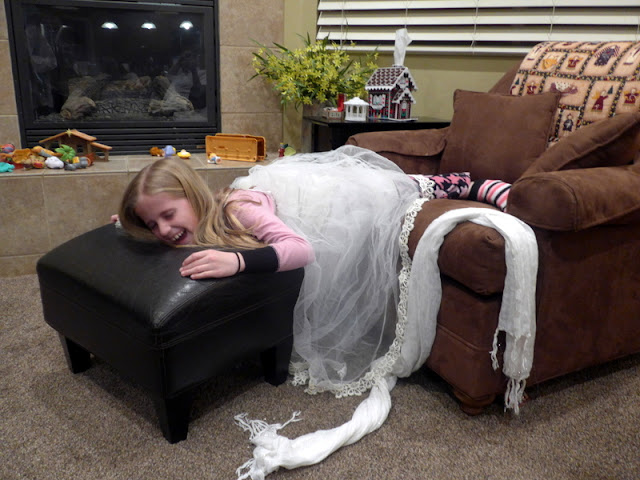 She eventually peeled herself off the stool/chair/floor and our nativity continued with the wisemen and so forth until the Holy Family escapes into Egypt (we always like to include that part because we're still rather partial to Egypt—in fact, we recently found out that a family in the ward are AUC alumni, like us (again, really just Andrew but I totally claim his time there as my own because it was a lot of work for me, too), so I totally pounced on them after church and she was like, "I was wondering when I saw your bag. It's from..." "Garbage City!" I said. "Yes!" she said)). 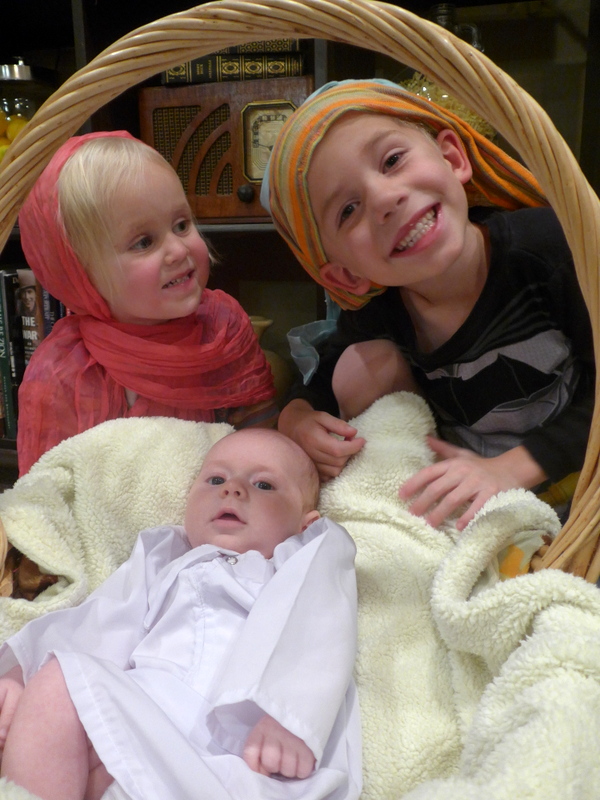 Here's our little cast after: 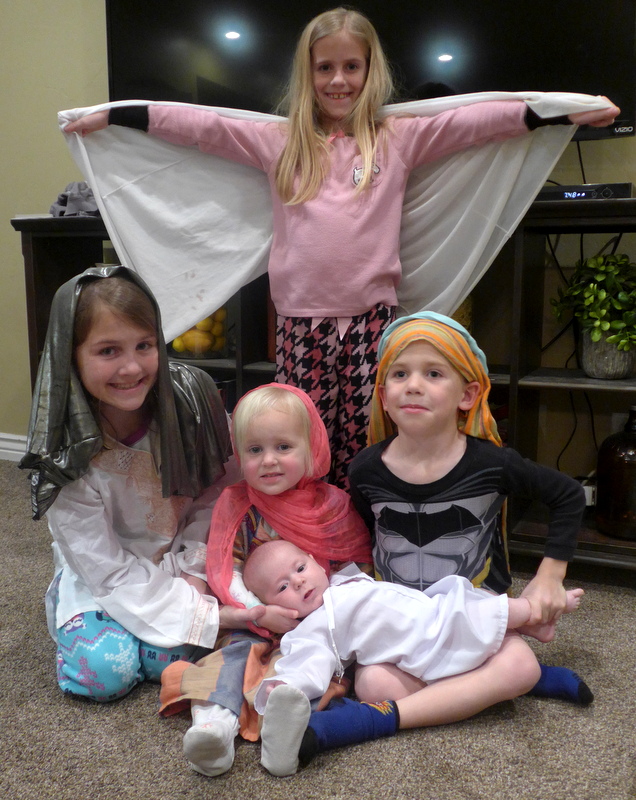 They're 100% incapable of all smiling at the same time: 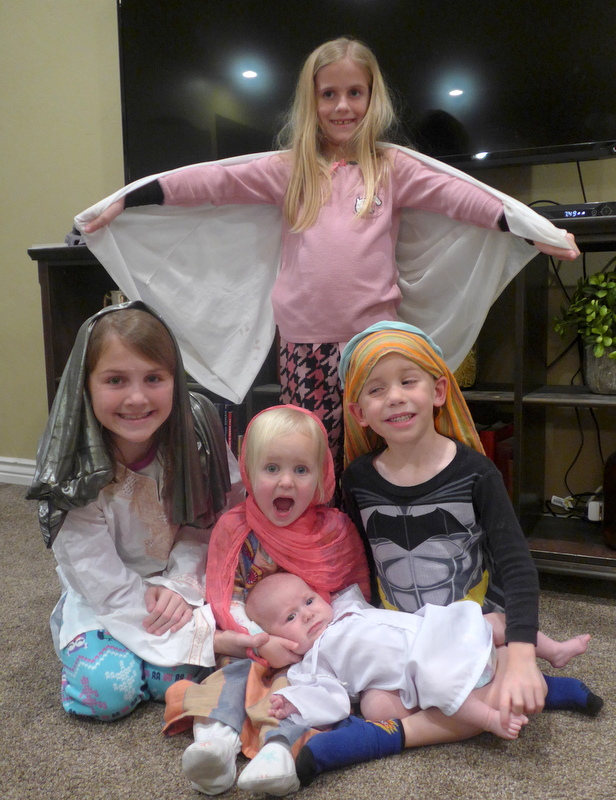 After that we had the kids choose places for the stockings to go. Zoë was excited about this and choose her foot as the place her stocking should go (I finished her stocking, including putting her name on it (I have yet to stitch Benjamin's name onto his stocking, but Benjamin is so long and Zoë is so short...so it's totally fair)). We let her play in the stockings for a bit before choosing actually spots for their stockings to sit and wait for Santa. 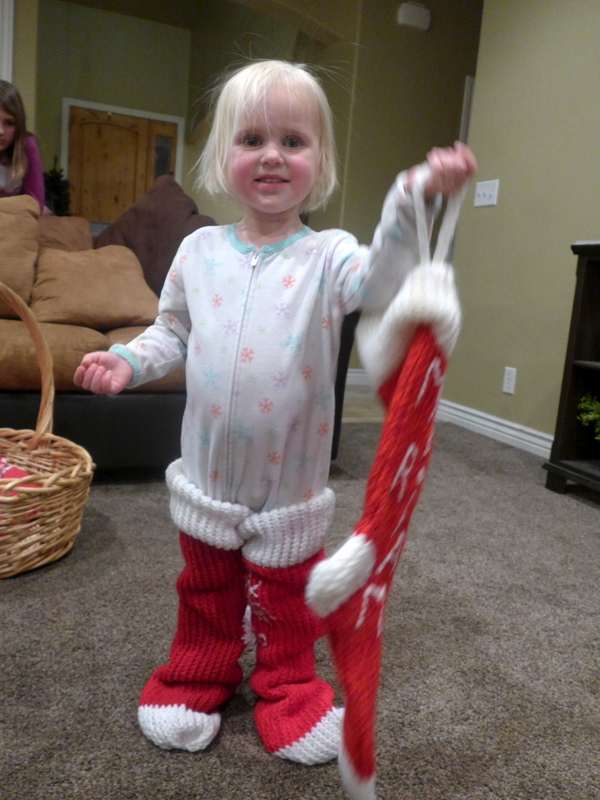 When I tucked her into bed she looked at me all fearfully and said, "Santa's not coming upstairs, right?"

"No, Santa's not coming upstairs," I assured her, confused about why she'd suddenly be afraid of Santa Claus (perhaps taking her to meet him was a mistake because his was a bit of a Grumpy Claus...but she didn't seem too scarred after meeting him).

"Then he won't care that my room is messy," she said, relaxing and snuggling into her pillow.

Side note: She's talking so well now that things don't seem as funny when I write them down, but they still sound so funny when she says them because she says each word so carefully, like each word is its own sentence.

As I was singing her her fifth or sixth lullaby, I glanced out her bedroom window and saw snow!

We have gotten snow a couple of times, but not ever enough to write home about, really. This was gathering on the rooftops, and sticking to the ground! I may or may not have gotten the kids all wildly excited about it by waltzing into the living room singing, "I'm dreaming of a white Christmas!"

They jumped out of bed, whooping and hollering, and ran to the windows to see for themselves.

And then we had to wrangled them all back into bed again.

Like herding cats, people!
Posted by Nancy at 1:58 AM