I have a bit of a penchant for making a perfectly normal conversation turn awkward really fast. It's not even always my fault. I mean, sure, there are days when I have no filter. Everyone has days like that, but this mishap was not my fault at all.

We spent Thanksgiving with Andrew's family since Emily was in town and all the little cousins were having so much fun together. But I did feel bad about not seeing my family at all during Thanksgiving so I hopped on Facebook and sent a group message to my family.

I typed their names into the "to" field: Dad, Mom, Kelli, Abra, David, Patrick, Josie

Then I composed my message: "Happy Thanksgiving! I'm thankful for all of you!"

But then I caught a glimpse of the previous messages on that thread: 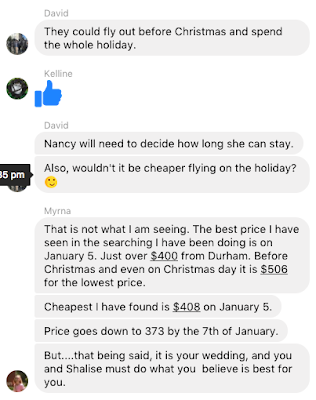 And I just about died because apparently,* the last time we chatted together** was October 2014, before David and Shalise broke off their engagement. What a wonderful thing to bring up out of the blue, amirite?!

So I quickly wrote: "Awwwwwwwkward thread to hop on. Sorry about that."

My family responded with love, kindness, and laughing-so-hard-I'm-crying emoticons.

Pro tip: Sometimes when things aren't quite awkward enough you just have to stir the pot a little bit. With some practice you, too, can be as socially awkward as me.

* Or, as Benjamin would say, accordingly. While we were eating at Wendy's after our photoshoot on Saturday Andrew asked, "Who's happy?" and all the kids—except for Rachel, whose mouth was full—chorused, "ME!" And then Benjamin said, "Well, accordingly Rachel's not!" And I thought it was hilarious.

In situations like this, accordingly could work as well as apparently. Like, "accordingly the last time we chatted together it was about something that feels super awkward to talk about today. Because of course it would happen that way."

** Not that we haven't chatted together since; it's just always been with other people added in, I guess (spouses and children and things). So this was simply the last time we chatted with just my parents and siblings.
Posted by Nancy at 2:39 AM