I've been meaning to write about Thanksgiving for quite some time, obviously, and probably would have had more to say had I written about it in a more timely manner. But I'm so far behind I hardly know where to begin. To borrow the words of my friend Lindsay, "You know in the movies when a rider falls from their galloping horse but their foot gets stuck in the bootstrap? Maybe that's happened to you, I don't know, but that's kind of how I feel right now. I'm the rider being bounced and dragged along against my will, and December is the horse."

Because it's seriously the middle of December already, which is just crazy!

At least Thanksgiving morning was pretty relaxed. We had little to do but play because we (Andrew and I) were in charge of pie and did our baking the day before. It sure was fun to have so many little cousins around to play with!

Here are the Benjamin, Gavin, Zoë and Maren enjoying some bubbles and chalk: 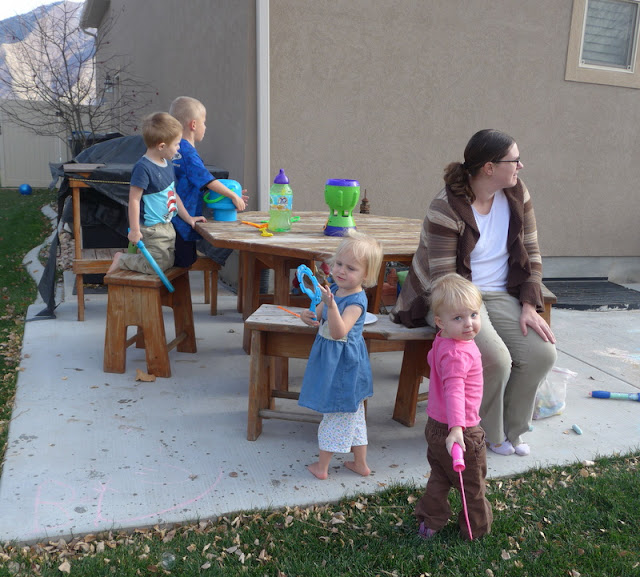 My sister Kelli loves to shop for little kids and her nieces and nephews are often the benefactors of her shopping sprees. Here are the kids enjoying a little parachute she gave to us: 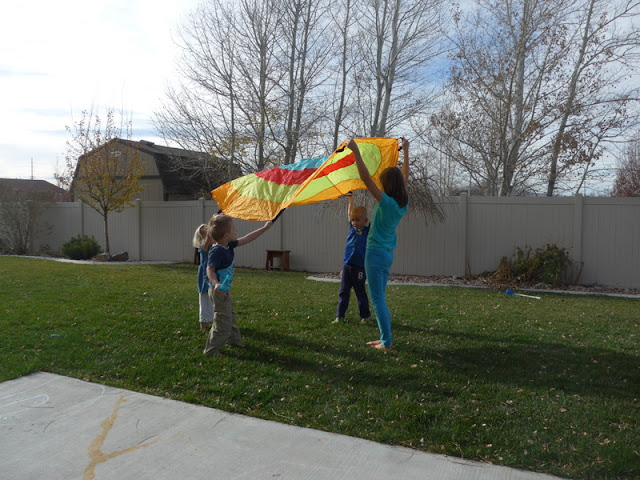 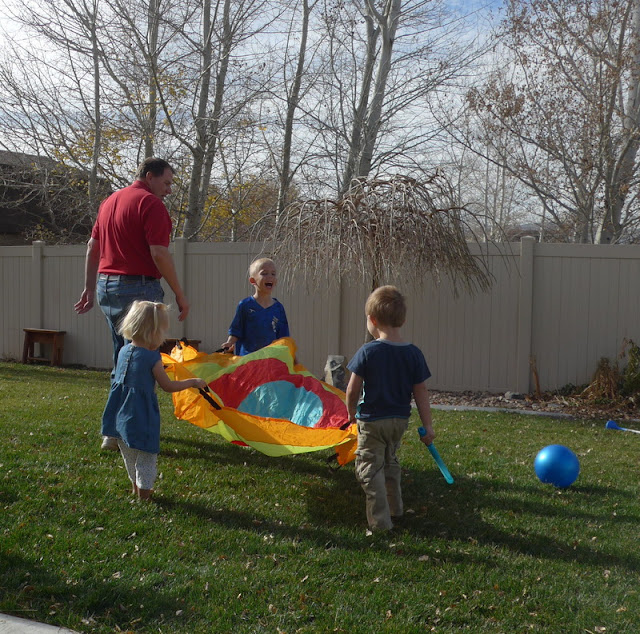 Here's me and Emily relaxing on the porch swing with our babies: 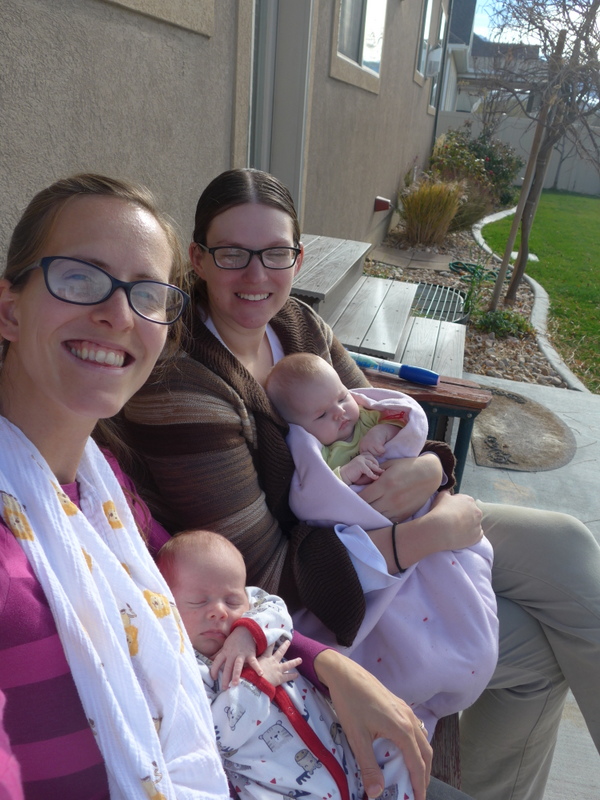 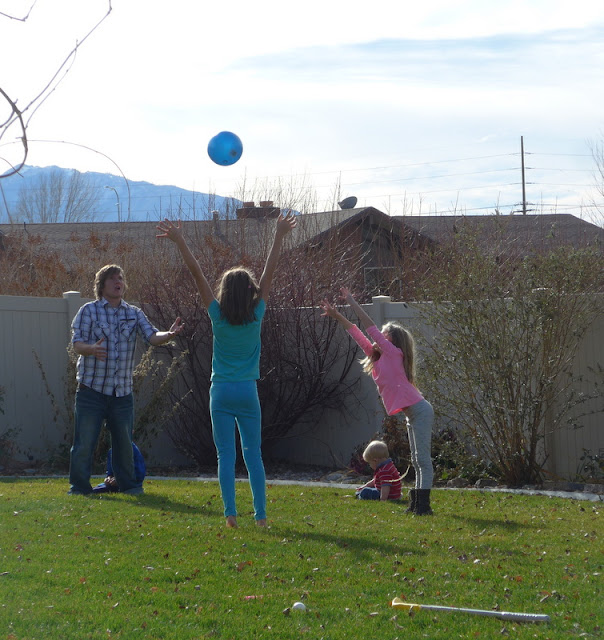 Here's Maren and Zoë swinging together in the backyard (I definitely typed swimming first and then deleted it and typed swinging since that is obviously what the girls are doing—but then I just thought how perhaps that's something that's lost when you type something rather than handwrite something because there's so much you can learn from the way something is written. Whether something was carefully penned or scrawled across the page, whether things are erased or scratched out, and so forth. Like, for example, if this was a handwritten entry my tiredness would probably come across loud and clear because I'd be scratching things out left and right as I realize my mistakes. But it's typed so all of that information is lost...except that I just told you that I wrote that the girls were swimming instead of swinging (a hint to my degree of exhaustion)): 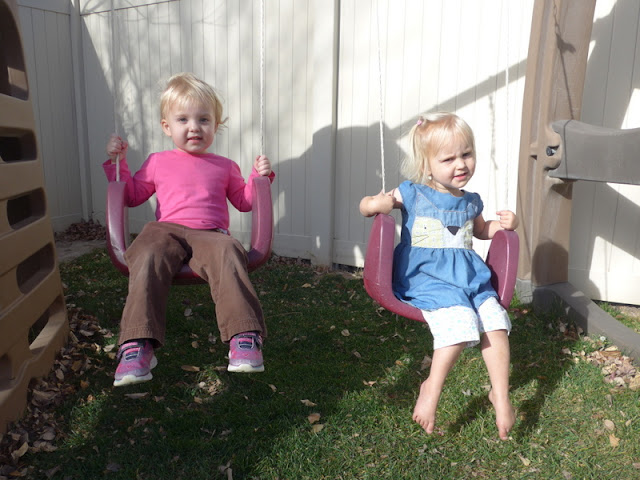 Here's Gavin with some boxing gloves on (another gift from my sister Kelli): 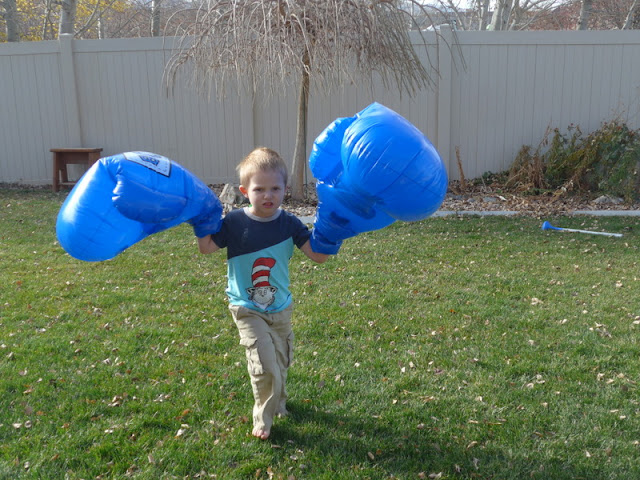 The kids had fun battling it out on the lawn. Here's Zoë and Gavin going at it: 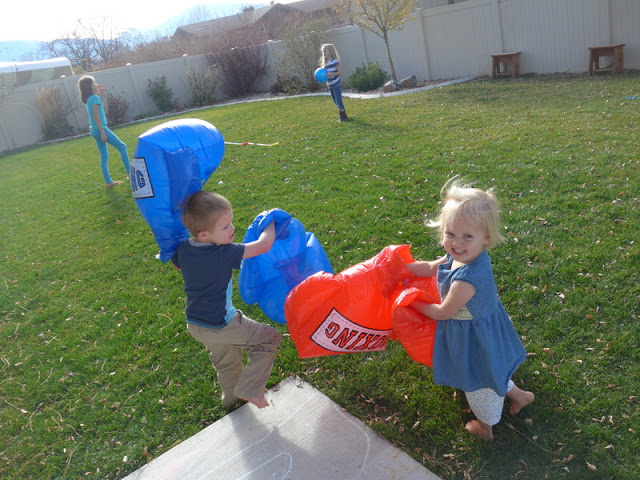 Zoë isn't a napper usually. I wish that she was but...we won't even start talking about her sleep habits right now (they're finally getting to tolerable levels). She must have been worn out by the day's shenanigans, however, because we put a movie on for the non-napping children while the nappers went down for their naps and Zoë conked right out: 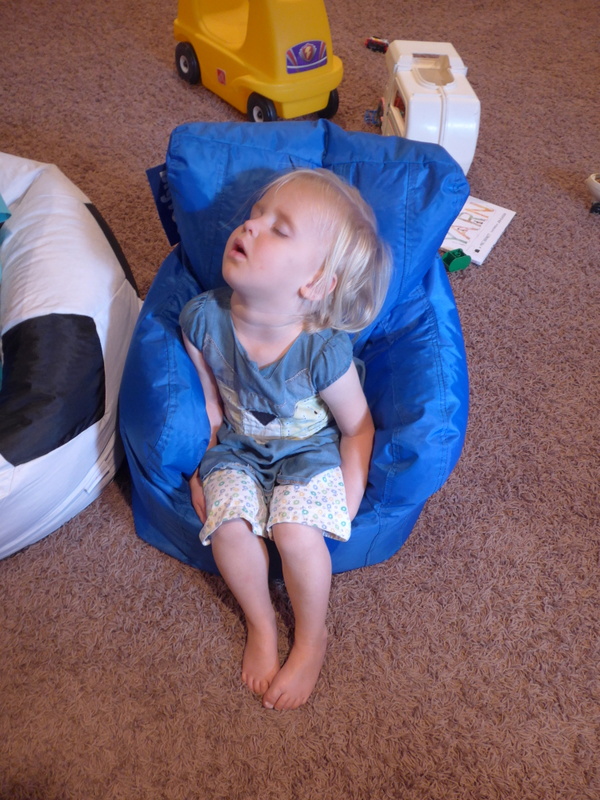 For thanksgiving dinner we had our family and Grandma and Grandpa, of course. Emily was there with her family, and Katharine with hers. Grandpa Frank, Grandma Pat, and Aunt Nicki joined us, and Sarah surprised us by showing up for dinner as well (we'd invited her but she didn't ever definitively say whether she'd be coming). It was a sizeable group: 22 people (if I counted correctly). 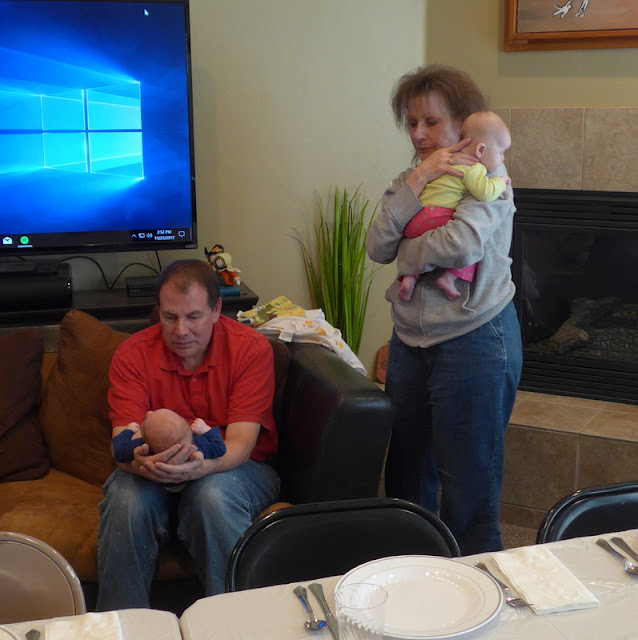 And here's Grandpa Frank, Grandma Pat and Emily chatting with them: 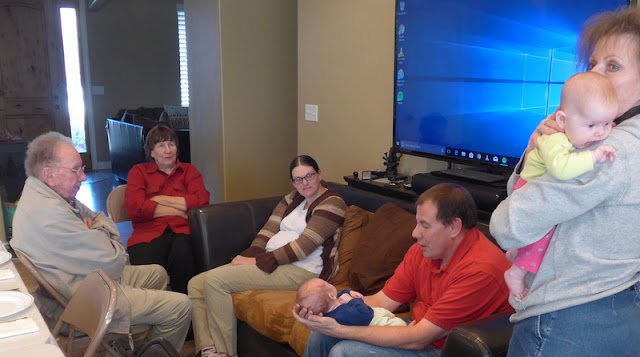 Andrew and I may have gone overboard with the pies. I had him get store-bought crust this year because—did I mention?—I didn't think I'd have the time, energy, or inclination to make crusts myself this year. Store-bought crusts makes pie making a snap much simpler. I made two pumpkin pies (from scratch), a peach pie, and a strawberry rhubarb pie (the peaches and rhubarb were from our garden). Andrew made an Atlantic Beach pie, two apple pies, and two banana cream pies. Emily made "Yucky Pumpkin Pie" (the story behind the name can be found here), which is a Heiss family favourite, and we bought a pecan pie because that's Grandma's favourite (but we didn't want to make one): 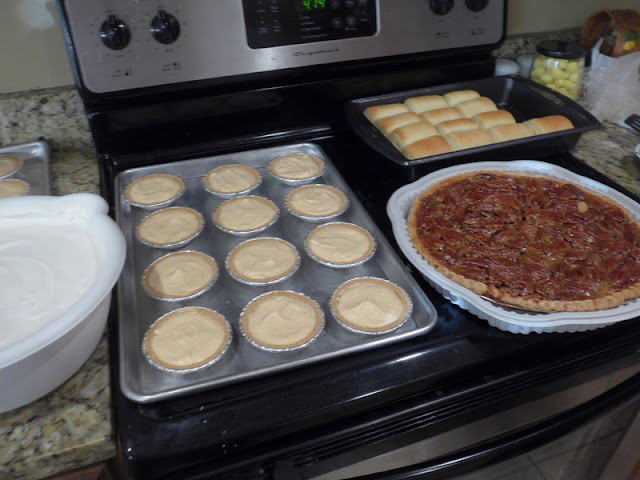 We had so much pie leftover (whole untouched pies) that we invited ourselves over to my parents' house the next day to share our pies. It was so nice of them to help us eat them!

My dad had recently returned from a trip to London to visit David (and good timing, too, considering David has now moved to Canada). He was happy to get to see Baby Alexander again—babies change so much in such a short amount of time! 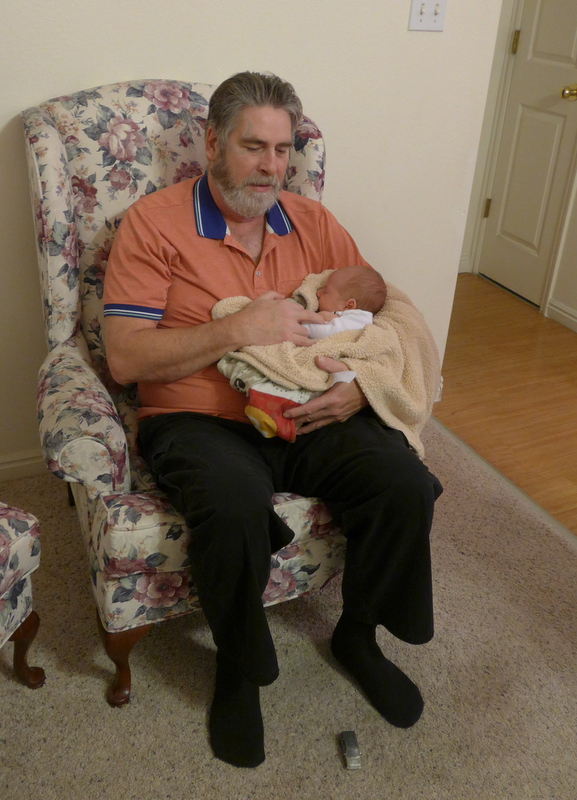 He showed us the skull he bought at the Tower of London (I believe) and we thought it looked about the size of Alexander's skull, so we took a picture. That's not morbid at all, right? He doesn't look very impressed. 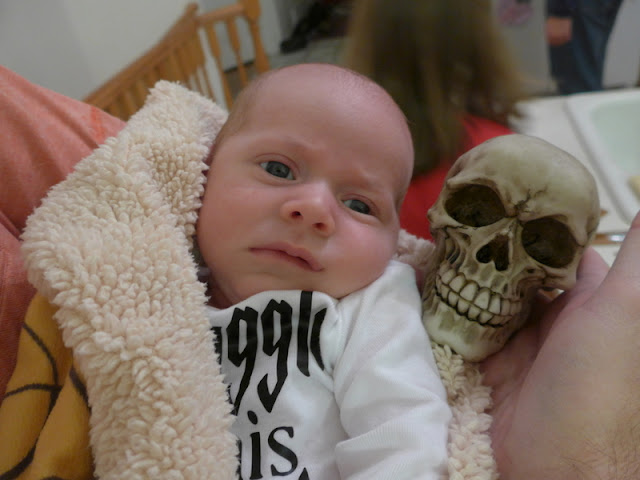 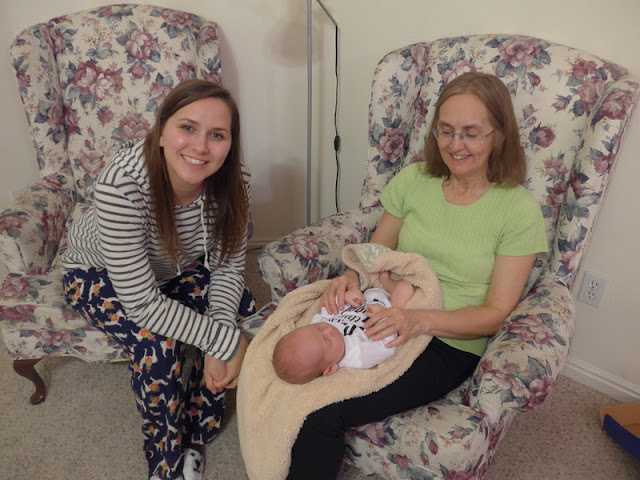 Josie is wearing llama pants, which Zoë was a fan of. She kept dragging Josie around to do things with her (build puzzles and read stories and things—why don't I have a picture of that?). Anyway, Zoë is a fan of llamas so I've been trying to think of a llama nickname for her because, you see, I  sometimes call her Goose (or Goosey Girl) but now that Alexander's here I've started calling him "Little Goose," for obvious reasons.

I suppose I could just continue calling them both Goose, but that might get confusing. So I just thought that if I could call Zoë a llama she might like that. But I can't really figure out how to do it. Maybe I can call her "Llama Queen" instead of drama queen (because she does have a flair for the dramatic).

Here's Uncle Patrick tickling her to death (he's such a good uncle): 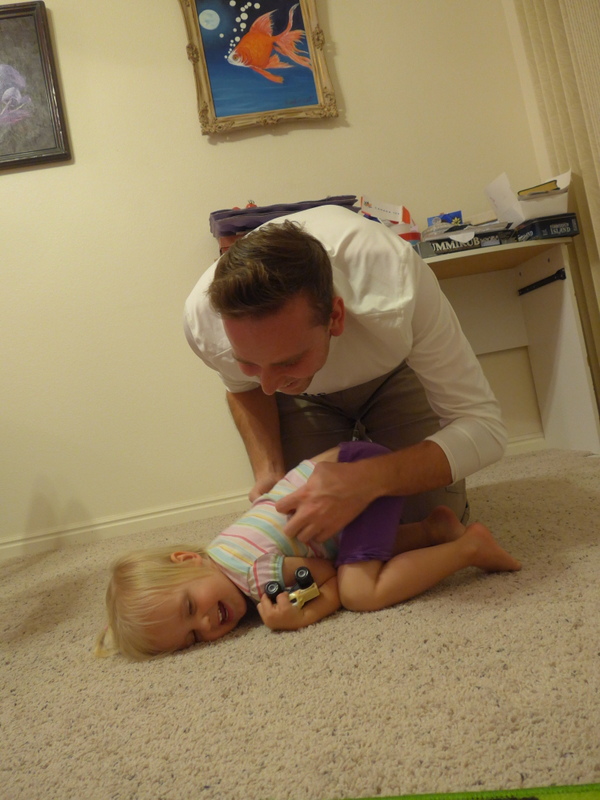 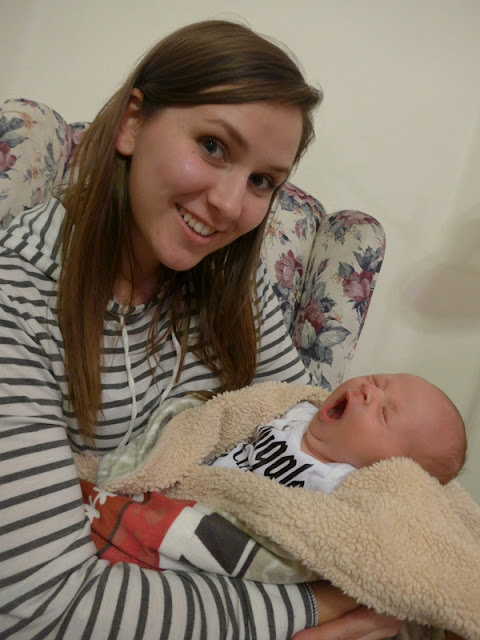 Here's my mom reading a story with Benjamin and Zoë: 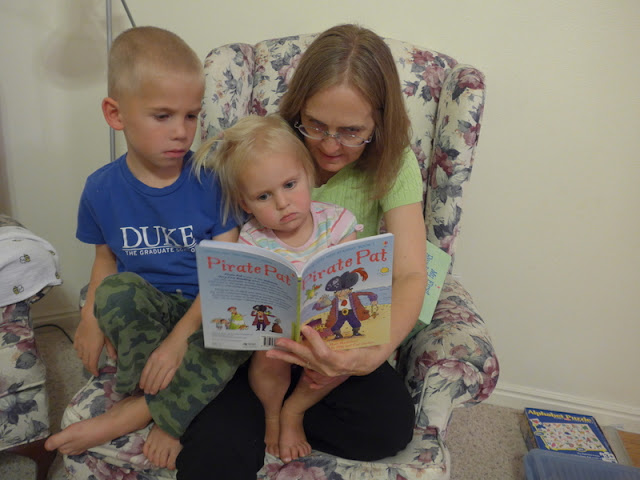 She ordered a set of early readers for Benjamin months ago (I'm sure it was before Alexander was even born) and they only just arrived at the end of November. The kids have loved reading them (I don't think we've even read them all yet but I'm sure we'll get there after Christmas because I also just pulled out our box of Christmas books, so they've been absorbed by those as well (plus we have to read all the Llama Llama books a few times every day).

Here's another shot of Naanii and Benjamin reading, this time with me in it (feeding Alexander): 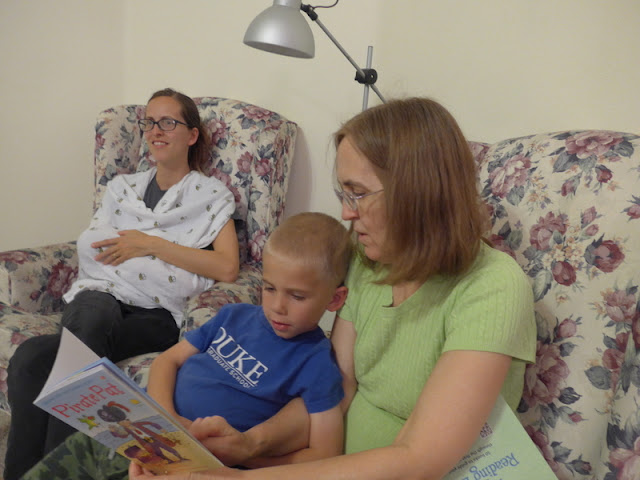