I actually finished this on our anniversary (which we celebrated with a bowl of ice cream and staying in; newborns will do that to you) and started sending it out to people. I know I haven't sent it out to half the people I've been meaning to. But I'm sure it will get there...

You can download the full size here or read the text below the jump. Enjoy! 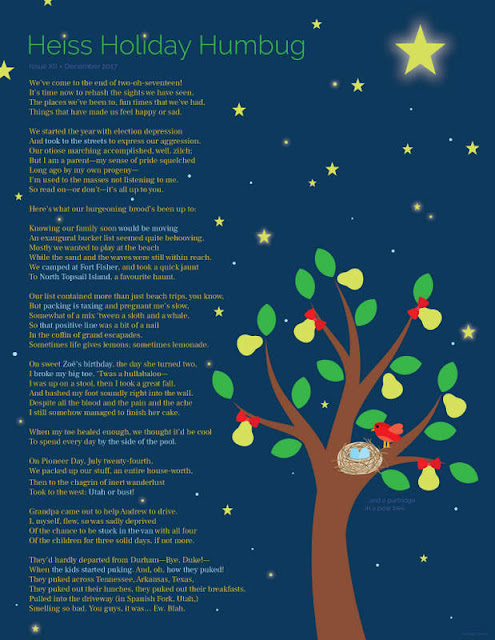 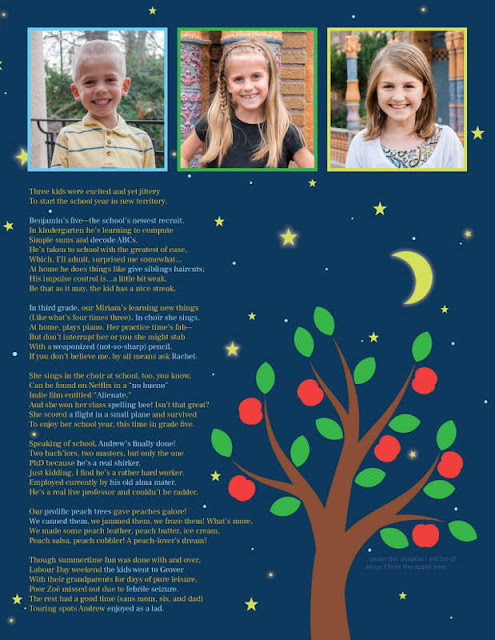 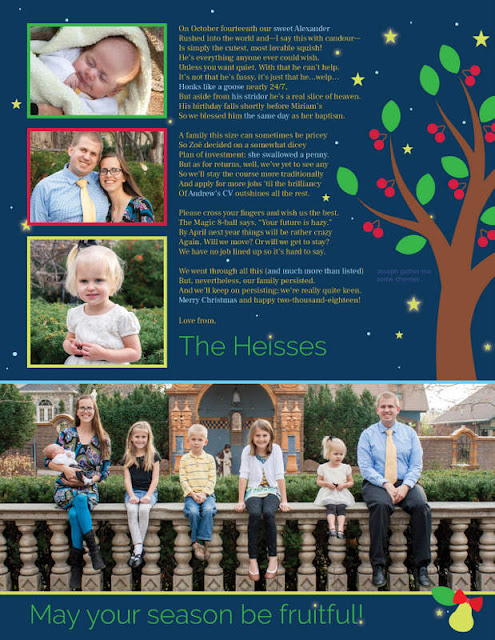 We’ve come to the end of two-oh-seventeen!
It’s time now to rehash the sights we have seen,
The places we’ve been to, fun times that we’ve had,
Things that have made us feel happy or sad.

We started the year with election depression
And took to the streets to express our aggression.
Our otiose marching accomplished, well, zilch;
But I am a parent—my sense of pride squelched
Long ago by my own progeny—
I’m used to the masses not listening to me.
So read on—or don’t—it’s all up to you.

Here’s what our burgeoning brood’s been up to:

Knowing our family soon would be moving
An exaugural bucket list seemed quite behooving.
Mostly we wanted to play at the beach
While the sand and the waves were still within reach.
We camped at Fort Fisher, and took a quick jaunt
To North Topsail Island, a favourite haunt.

Our list contained more than just beach trips, you know,
But packing is taxing and pregnant me’s slow,
Somewhat of a mix ‘tween a sloth and a whale,
So that positive line was a bit of a nail
In the coffin of grand escapades.
Sometimes life gives lemons; sometimes lemonade.

On sweet Zoë’s birthday, the day she turned two,
I broke my big toe. ‘Twas a hullabaloo—
I was up on a stool, then I took a great fall,
And bashed my foot soundly right into the wall.
Despite all the blood and the pain and the ache
I still somehow managed to finish her cake.

When my toe healed enough, we thought it’d be cool
To spend every day by the side of the pool.

On Pioneer Day, July twenty-fourth,
We packed up our stuff, an entire house-worth,
Then to the chagrin of inert wanderlust
Took to the west: Utah or bust!

Grandpa came out to help Andrew to drive.
I, myself, flew, so was sadly deprived
Of the chance to be stuck in the van with all four
Of the children for three solid days, if not more.

Three kids were excited and yet jittery
To start the school year in new territory.

Benjamin’s five—the school’s newest recruit.
In kindergarten he’s learning to compute
Simple sums and decode ABCs.
He’s taken to school with the greatest of ease,
Which, I’ll admit, surprised me somewhat...
At home he does things like give siblings haircuts;
His impulse control is...a little bit weak.
Be that as it may, the kid has a nice streak.

In third grade, our Miriam’s learning new things
(Like what’s four times three). In choir she sings,
At home, plays piano. Her practice time’s fab—
But don’t interrupt her or you she might stab
With a weaponized (not-so-sharp) pencil.
If you don’t believe me, by all means ask Rachel.

She sings in the choir at school, too, you know,
Can be found on Netflix in a “no bueno”
Indie film entitled “Alienate,”
And she won her class spelling bee! Isn’t that great?
She scored a flight in a small plane and survived
To enjoy her school year, this time in grade five.

Speaking of school, Andrew’s finally done!
Two bach’lors, two masters, but only the one
PhD because he’s a real shirker.
Just kidding, I find he’s a rather hard worker.
Employed currently by his old alma mater,
He’s a real live professor and couldn’t be radder.

Our prolific peach trees gave peaches galore!
We canned them, we jammed them, we froze them! What’s more,
We made some peach leather, peach butter, ice cream,
Peach salsa, peach cobbler! A peach-lover’s dream!

Though summertime fun was done with and over,
Labour Day weekend the kids went to Grover
With their grandparents for days of pure leisure.
Poor Zoë missed out due to febrile seizure.
The rest had a good time (sans mom, sis, and dad)
Touring spots Andrew enjoyed as a lad.

On October fourteenth our sweet Alexander
Rushed into the world and—I say this with candour—
Is simply the cutest, most lovable squish!
He’s everything anyone ever could wish,
Unless you want quiet. With that he can’t help.
It’s not that he’s fussy, it’s just that he...welp…
Honks like a goose nearly 24/7,
But aside from his stridor he’s a real slice of heaven.
His birthday falls shortly before Miriam’s
So we blessed him the same day as her baptism.

A family this size can sometimes be pricey
So Zoë decided on a somewhat dicey
Plan of investment: she swallowed a penny.
But as for returns, well, we’ve yet to see any
So we’ll stay the course more traditionally
And apply for more jobs ‘til the brilliancy
Of Andrew’s CV outshines all the rest.

Please cross your fingers and wish us the best.
The Magic 8-ball says, “Your future is hazy.”
By April next year things will be rather crazy
Again. Will we move? Or will we get to stay?
We have no job lined up so it’s hard to say.

We went through all this (and much more than listed)
But, nevertheless, our family persisted.
And we’ll keep on persisting; we’re really quite keen.


Merry Christmas and happy two-thousand-eighteen!
Posted by Nancy at 1:35 AM