We had Andrew's siblings over for FHE tonight (or at least half of them (one is up in Idaho and the other...bahahaha...there's a long backstory there, to say the least)) since Reid and Karen leave for Mexico tomorrow and will be gone through Christmas. It was fun to get to see them and get the cousins together.

Andrew barbecued some smash burgers for everyone (in the freezing cold) and then we gathered around the Christmas tree for some music. Miriam and Rachel both played a piece they'd been working on. 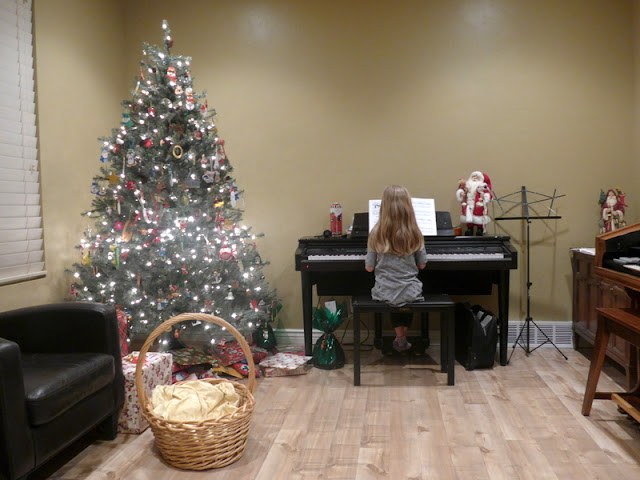 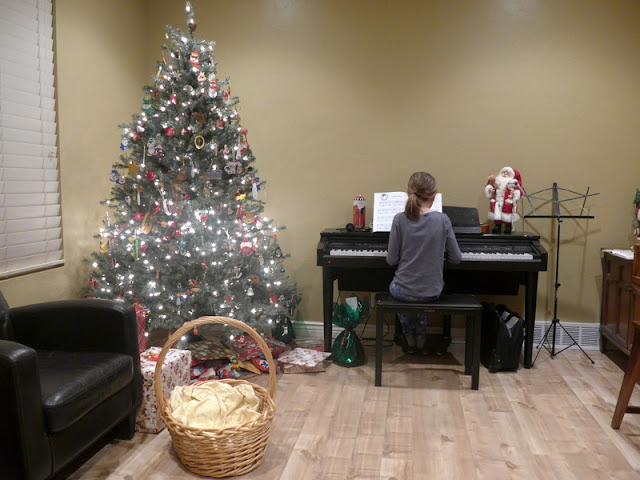 And then Karen pulled out some sheet music for Rudolph the Red-nosed Reindeer, which Zoë loves so she hopped up on the bench beside Grandma to "help" her play. If she wasn't quite so stubborn, I'd get a video of her singing all these songs (but she's pretty stubborn so I don't know it will happen. 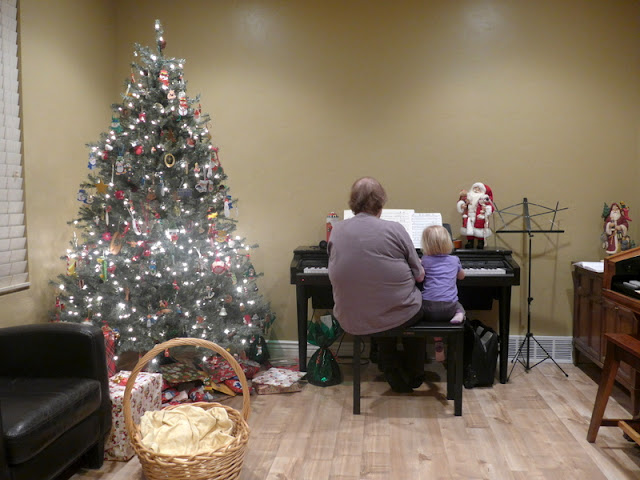 Here's a video of everyone singing along in all our glory (Alexander and Andrew were out for a diaper change which is why they're not featured):

After singing it was time to act out the nativity story. We pulled out a bunch of costumes and let people dress up for their parts (if they were willing to put on a costume). In an odd turn of events, no one wanted to be Mary this year so Zoë was nominated for the part. She was perfectly willing to play the part (she's just unaware that it's a typically desired role). Kayl volunteered to play Joseph, which I think was good.

Rachel and Miriam thought it would be cute to have Riley play Joseph but, uh, the two-year-olds carrying the play seemed like a pretty awful idea. Riley ended up being...something. Truthfully I can't remember if he was supposed to be a shepherd or a wiseman. He refused to put on a costume. But, he enjoyed hanging out our sheep—Grandpa—so perhaps he was a shepherd.

Benjamin wanted to be "The Angel of the Lord." We're reading The Best Christmas Pageant Ever right now and I think he felt that "The Angel of the Lord" was a very impressive role. Miriam wanted to be the angel as well and though I told her there could legit be a multitude of angels, she didn't want to double up on the role. So Benjamin was our angel.

Here he is sharing the Good News to the shepherds (me and Rachel and maybe Riley) and sheep (Grandpa): 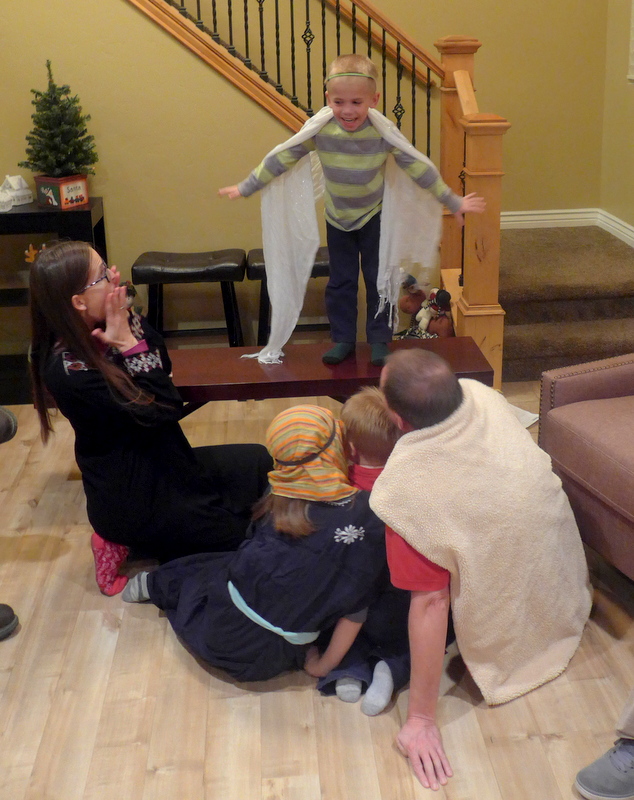 Here are the shepherds admiring the baby with Mary and Joseph: 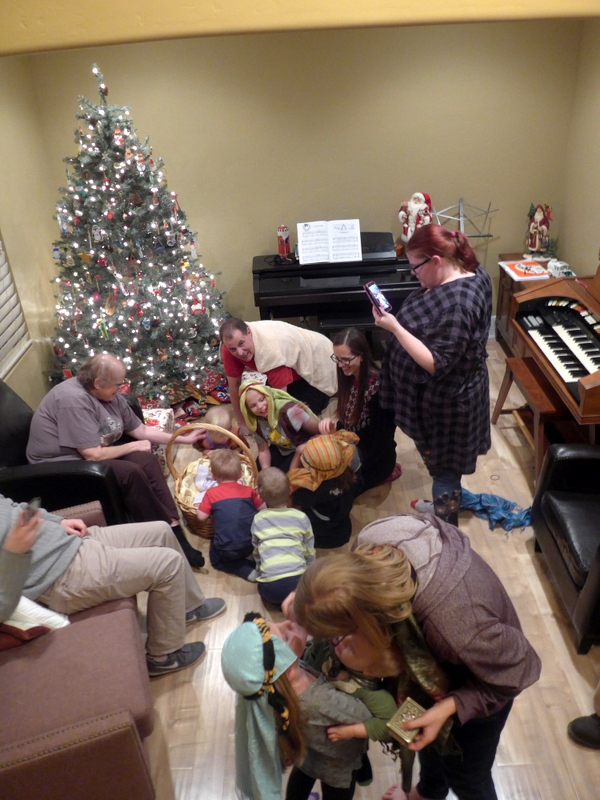 At this point Riley became so enamoured with Baby Jesus lying (wide awake) in the manger (basket) that he stuck around for the three magi—Shayla, Carter, and Miriam—as they presented him with (fake) gold and (real) frankincense and myrrh. 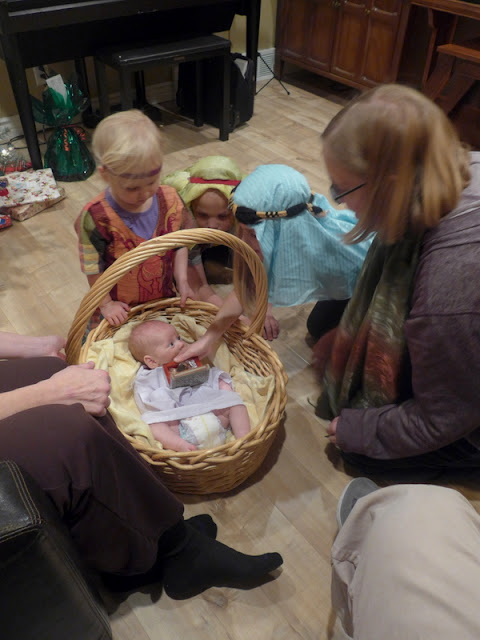 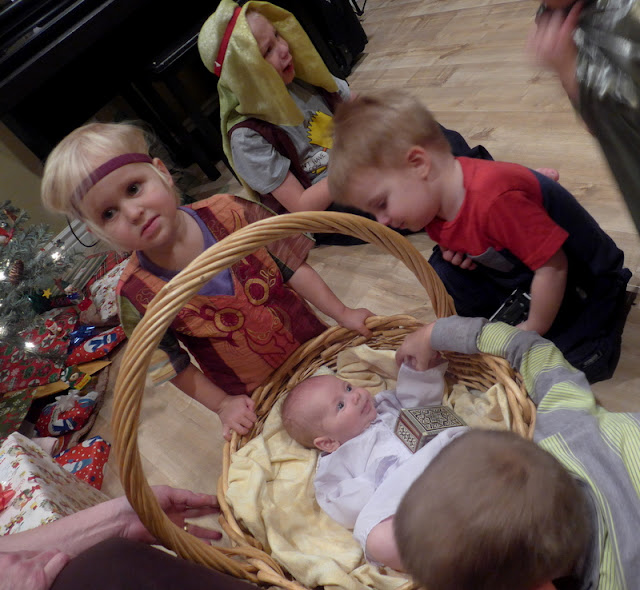 Poor Kayl, as I mentioned before, is a little bit afraid of babies. Today, however, he went over to Alexander while he was sitting all alone in his bouncy seat and he talked to him. I was so impressed. But Kayl was not. He walked over to me, quite upset, and said, "Nancy, he won't say hi to me!" 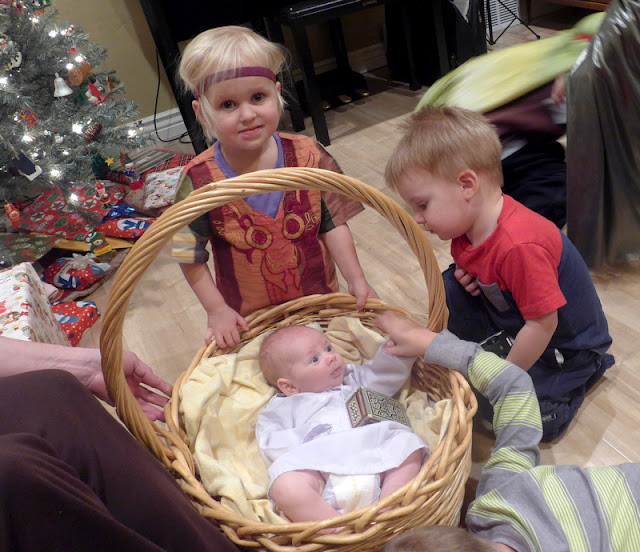 And that was about the end of our play, which meant it was time for presents! Our sweet baby was getting rather tired of being in that basket, anyway. 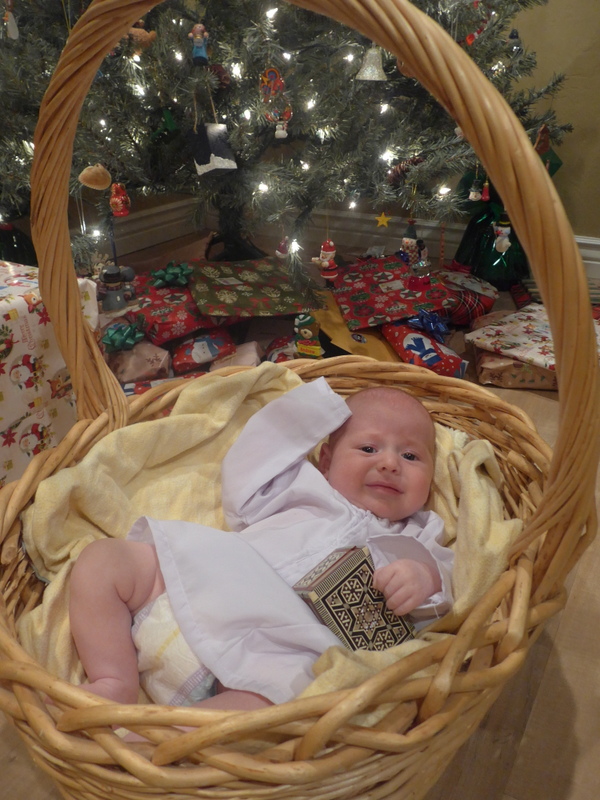 Grandma and Grandpa got the kids books and touques. Zoë was especially excited about her gifts and I really wish we could have caught her squeals on video (we didn't, of course) because she was just so overjoyed. Grandma found some more Llama Llama books for her! 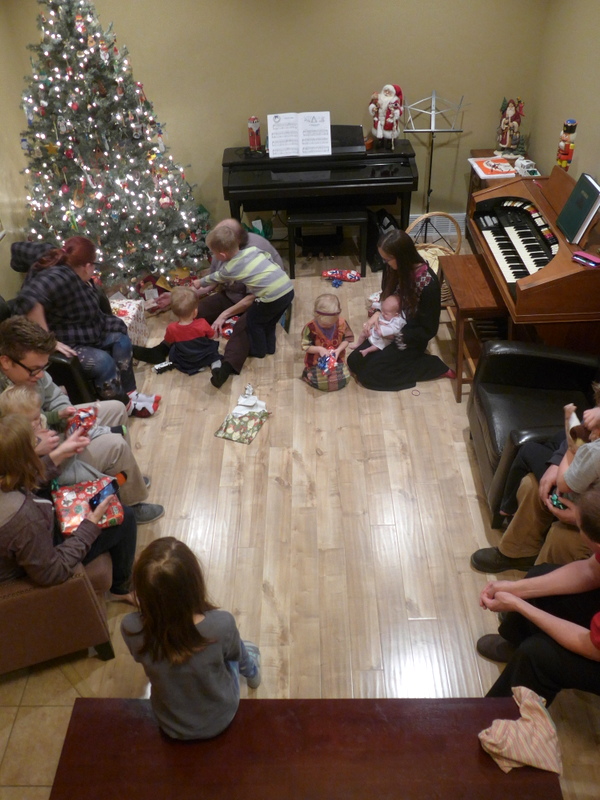 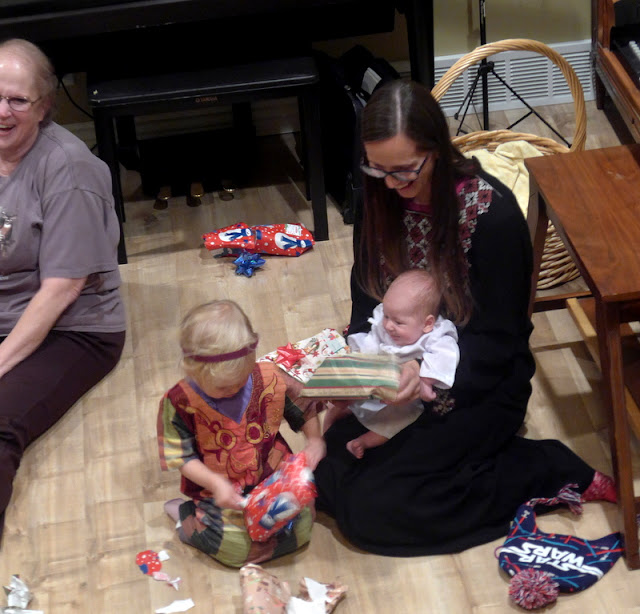 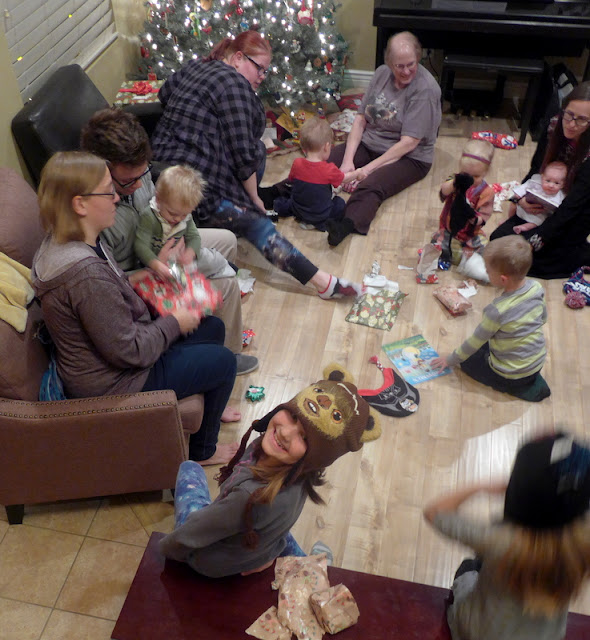 After all the excitement died down and we got the big kids in bed, I sneaked back downstairs to take a few more pictures of Alexander under the Christmas tree. 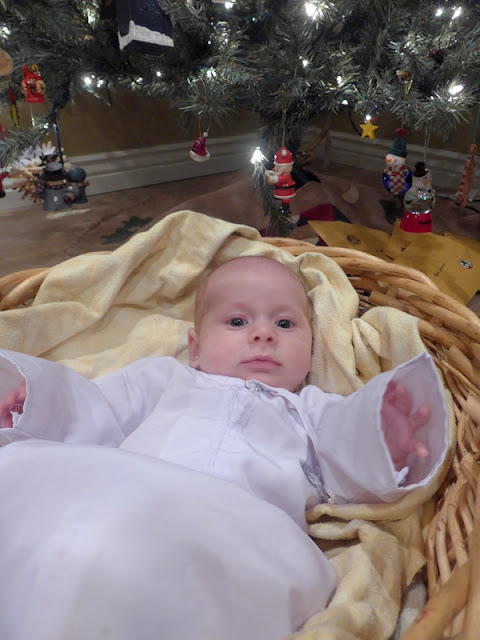 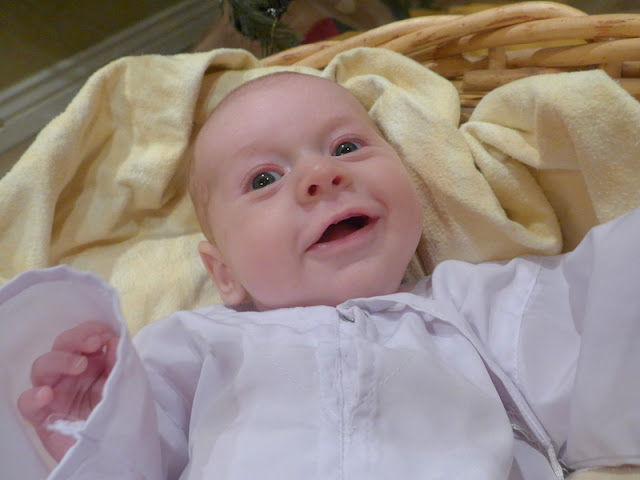