On Saturday morning, Zoë did a lovely number two and Andrew volunteered to probe it for that silly penny. We were beginning to give up hope by this point. From our research online, the penny should have made its appearance by day four, so on Friday at Alexander's check up I casually asked the doctor how long we should wait and what we should do if that penny never showed up. He asked if there was a chance we could have missed a bowel movement—and admittedly there was. Andrew was on penny patrol for the first couple of days, but then he went out of town so that meant I was on penny patrol. And then he came back from being out of town and I was still on penny patrol because, as it turns out, she tends to poop during business hours.

I'm kind of losing my everliving mind with five children to worry about so, yeah, there is a chance that she may have pooped that penny out completely unnoticed.

But I was also being hyper vigilant about her pooping habits so...I was pretty sure I caught them all.

The doctor suggested we bring her in for an x-ray by the end of this week if we still hadn't seen a penny, just to be sure it wasn't lodged somewhere that might be problematic. But we got the okay to give her a few more days—even several more days—to let things work themselves out (things being pennies).

This brings us back to Saturday when we heard Andrew's jubilant cry from the bathroom, "We have a penny!"

There was much rejoicing.

"I pooped my penny out!" Zoë squealed with delight. 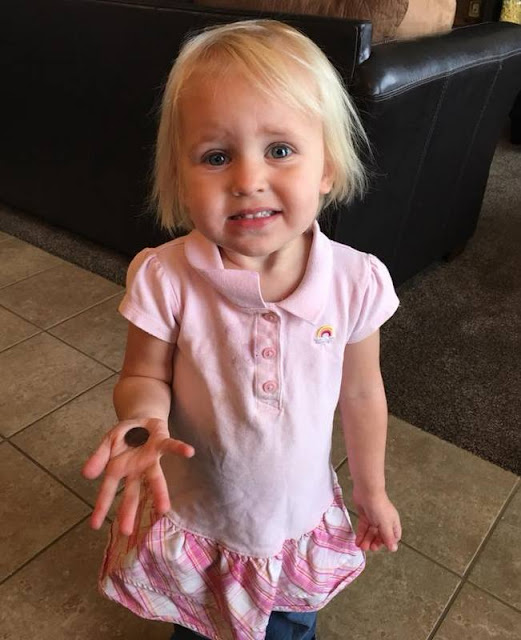 There is a video of her talking about her penny as well, which maybe I'll put up sometime. And maybe I won't. Because, like I said, I'm losing my mind over here.

She kept talking about how her penny came out and how it had been riding around and around inside her tummy. She was mighty proud about pooping her penny out, but I don't think she'll be swallowing any more spare change in the near future.

I composed a little poem about her, borrowing the meter from the nursery rhyme "Simple Simon" because that would run through my head every time I was wrist-deep in toilet water squishing her BMs, specifically the part that goes "show me first your penny" and "indeed I have not any."

Zippy Zoë found a penny
Somewhere on the floor;
Says Zoë to her friend the penny,
"Come on, let's explore!"

Says the penny to Zippy Zoë,
"Show me first your tummy!"
Says Zoë to that tricky penny,
"Gee wiz! That sounds just plummy!"

Zippy Zo choked down her penny.
For six whole days plus two
It traveled round inside her tummy
'Til she plopped it in the loo.
Posted by Nancy at 2:18 AM